Hello PokéBeach readers, it is with great pleasure that I write another Pokémon TCG article for all of you. I’m excited about the release of Evolving Skies and the post-rotation format as they are great news for all of us. New cards arrive, old cards are gone, and with that the metagame changes completely.

This transition period is a bit confusing as we will play three different formats in a ten-day time frame. Last week, the format was Team Up to Chilling Reign (TEU-CRE), now we are in Team Up to Evolving Skies (TEU-EVS) format, and next week we will be in the Sword and Shield to Evolving Skies (SSH-EVS) format. With so many new possibilities in two different formats, one happening now and the other in a few days, it’s practically impossible to test everything, especially if your day-to-day play time is short. If you need an immediate solution to playing competitively, I think the Eternatus VMAX  lists I have for you might be a good idea.

Eternatus VMAX is a good deck during this period because it has been in the format for some time. Its gameplay, despite having a lot of variations, still consists of Eternatus VMAX as the main attacker while the base of the deck remains the same for the post-rotation format. In the pre-rotation (TEU-EVS) format, my favorite variation is Eternatus VMAX / Weavile-GX . Now with the arrival of the non-Pokemon V Galarian Moltres, it is possible to bring more Darkness Energy onto the field to perform heavy attacks like Umbreon and Darkrai-GX‘s Dark Moon GX. In the post-rotation format, we won’t have Weavile-GX or Umbreon and Darkrai GX, so my favorite version becomes Eternatus VMAX with the new Umbreon VMAX to drag to the Active Spot any of your opponent’s Pokemon on the Bench more easily and consistently, to reinforce the offensive power that the deck’s strategy naturally possesses.

In today’s article I will analyze the two lists, which have completely different constructions and objectives despite both being Eternatus VMAX. While the list of Eternatus VMAX / Weavile-GX gains strength at the end of the game, the list of Eternatus VMAX / Umbreon VMAX gains more strength at the beginning of the game. The big challenge I had with Weavile-GX version is to make the strategy consistent, because aligning offensive power and consistency is always an arduous task. In the version with Umbreon VMAX, the biggest challenge was to find a solution to deal with Path to the Peak. Without Chaotic Swell, Viridian Forest, Dangerous Drill, and Dark City, the most interesting options to remove Stadium cards are gone. However, I managed to find an unusual Stadium capable of bringing an interesting mechanic to the deck. I really like the final result of these two lists and it has been my safety picks for playing tournaments, I hope you enjoy the deck analysis!

To start, I would like to comment a little on the Eternatus VMAX variants. First, we have the straight version with no major combinations, just enough like Galarian Moltres V and Galarian Zigzagoon as techs. This version is generally the most consistent, but it has the least offensive power. To do well competitively, it might be a good idea to devote some of the extra slots in the list to investing in lighter techs like Phoebe, Big Charm, and Weakness Guard Energy to try to keep this version more consistent and still win some of your better matchups.

Then there’s the classic version focused on Galarian Zigzagoon and Scoop Up Net to add damage counters on your opponent’s field. The strategy is to be able to Knock Out an opponent’s Pokemon VMAX with only one Eternatus VMAX attack. I’ve always liked this version, as there are very few decks that can do this. The impact of Knocking Out your opponent’s key Pokemon is always greater.

With the arrival of Evolving Skies we have the Eternatus VMAX / Umbreon VMAX version, the most hyped version of all. This version is more aggressive because it makes the task of hitting 270 damage on the Pokemon you want much simpler and more consistent. This version can’t Knock Out Pokemon VMAX in one attack, so Umbreon VMAX helps get Knock Outs against Pokemon-GX or Pokemon V on the opponent’s Bench like Dedenne-GX, Crobat V, or Eldegoss V.

And finally we have my preferred version, which is with Weavile-GX. This version can perform absurd attacks like Dark Moon GX from Umbreon and Darkrai-GX, which allows you to Knock Out the opponent’s Active Spot Pokémon, at the same time preventing the opponent from using Trainer cards on their next turn. This attack is so strong that in many cases you win games that would be impossible because of it. And if by chance it is not possible to perform this attack, Weavile-GX offers several other small advantages so that you have a better version of a conventional Eternatus VMAX deck.

Eternatus VMAX / Weavile GX reached its final form, as with the arrival of the non-Pokemon V Galarian Moltres it has become faster and more consistent to perform incredible attacks like Dark Moon GX by Umbreon and Darkrai-GX and Red Banquet by Guzzlord. These attacks are the differential that Eternatus VMAX needed to become a really interesting and competitive deck in this format. The deck’s strength at the beginning of the game is remarkable due to its ability to deal 270 damage from the second turn, but it lacked a big attack to end the game or to turn an unfavorable match.

This version of Eternatus VMAX brings many possibilities as it can use different attacks from different Pokemon. Thanks to this advantage, you can adapt to different situations in a match, especially when you are losing the game. When you have the advantage, all you have to do is perform the correct sequencing, get a good setup, and attack the opponent’s main threats with Eternatus VMAX. When you are losing, then it is necessary to perform strong and differentiated plays. In addition, the deck has attackers that require different Energy costs, and this also helps you execute a better game plan to try to get out of a disadvantaged situation.

One advantage of this deck list is not needing Phoebe to knock out Zamazenta V, Decidueye, and Glaceon VMAX. Thanks to Umbreon and Darkrai-GX, Galarian Moltres V, Guzzlord, and Galarian Moltres, it’s possible to damage and KO all of these Pokemon. Phoebe has always been a very efficient solution for dealing with these decks, but if you are playing a matchup other than the three mentioned above, Phoebe is a completely useless card.

The Dark Moon GX attack is an even better option than Phoebe against Glaceon VMAX, as it can OHKO compared to Eternatus VMAX. Dark Moon GX works the same way against Zamazenta V and Decidueye as well. But remember, if the opponent’s has attached Big Parasol to their Active Spot Pokemon, Dark Moon GX will have no effect. 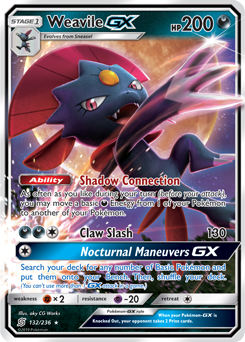 Even without Weavile-GX, Eternatus VMAX is a decent deck. This makes me think that as interesting as it is to move Energy cards, it’s still very effective to have an Eternatus VMAX by the second turn. Many matches are won just by beating Eternatus VMAX. Because of that, I believe that a 2-2 Weavile GX line is enough.

In an Eternatus VMAX deck, Weavile-GX provides several advantages. Together with Galarian Moltres V that can attach a basic Darkness Energy card from the discard pile, the deck gains the possibility to manually retreat more easily, being able to alternate attackers in the Active Spot position to avoid Knock Outs by the opponent, and not be severely punished by cards with the effect of removing Energy like Crushing Hammer and Team Yell Grunt. Now with the arrival of the non-Pokemon V Galarian Moltres from Evolving Skies to attach two additional Darkness Energy cards, it’s possible to attach six Energy cards onto the same Pokemon. If not for this new advantage, I believe Umbreon VMAX would be a more interesting option for Eternatus VMAX.