Hello everyone! Exciting things are happening in Pokemon, especially for those of us here in the TCG!

This week, Evolving Skies will be released, adding a bunch of new archetypes to our various formats. Even more importantly, we’re inching ever-closer to the start of the 2021-2022 season, and to the 2021 Standard Rotation. While the power-creep effect from Pokemon V and Pokemon VMAX have been apparent, especially with recent sets, the 2021 rotation will nonetheless have a substantial effect on the Standard format. Most notably, for the first time since early 2016, we will be without Pokemon-GX (no need for those GX markers anymore!) — including the Tag Team Pokemon-GX that have dominated the meta since their release. Tag Team Pokemon-GX may not be the comparatively powerhouse Pokemon they once were, but still, they have been prevalent even throughout the Chilling Reign meta. Previously top-tier decks such as Pikachu and Zekrom-GX and Reshiram and Charizard-GX may have finally faded, but Mewtwo and Mew-GX is still a top meta option, as were the other Psychic-type Tag Team Pokemon-GX, Lucario and Melmetal-GX, and of course, the dreaded Arceus and Dialga and Palkia-GX (ADP). While there are a ton of subtle changes that will show themselves, the loss of ADP stands out as particularly important, especially when it comes to the deck diversity of future formats.

For a while now, ADP has played a role as a gatekeeper deck, especially for non-Pokemon V decks. While its meta share has subsided from its peak during the Darkness Ablaze format, the threat of Altered Creation GX has muted the hopes of non-Pokemon V decks throughout its existence. Previously, in order for a single-Prize deck to work in an ADP dominated format, it either had to be exceptionally strong, or else have a gimmick that gave it a chance to win in some other manner. It wasn’t enough to simply be able to advantageously trade 2-for-1s with Pokemon V or Pokemon VMAX; instead, the pool of effective non-Pokemon V decks was limited to those with both the speed and firepower to take on ADP. If your deck was lacking in either capacity, you probably couldn’t beat ADP, and with ADP representing 10-20% of the meta at any given tournament, it was a tough ask to remain competitive with those decks – especially if they struggled with any other aspect of the metagame.

This meant that a lot of decks that might otherwise have had a chance were kept out of the hands of competitive players, and while some non-Pokemon V decks were able to find success, by and large the single-Prize attacking archetype was relegated to the binder for 2021. Now, with ADP gone, some of those non-Pokemon V decks can start to make a comeback! Of course, things are a bit more complex than “ADP is gone, non-Pokemon V will now dominate the meta”. For a non-Pokemon V deck to work, it still needs to have a coherent strategy, and be able to match up with the top Standard decks (Shadow Rider Calyrex VMAX, Rapid Strike Urshifu VMAX, Eternatus VMAX, etc.). Still, without the ADP threat, a wider variety of non-Pokemon V decks should start to see competitive play. While I would expect the naturally fast-and-strong decks to continue to be at the top, the pool shouldn’t be limited to just those. Slow-but-strong decks, spread decks, and type-advantage non-Pokemon V decks are all archetypes that we haven’t seen much of over the past year or so, but with Altered Creation GX gone, they should have a chance so long as they can still match up with your typical meta decks.

To celebrate the rotation of ADP, I’ll be using this article to talk about two of my favorite non-Pokemon V decks that you can play in the post-rotation Standard format. The first, Rapid Strike Malamar, is a carryover from the Chilling Reign format, that you can try out now to get a feel for it even before the rotation hits. The other, Regidrago / Cherrim, is a new concept from Evolving Skies that I believe is the best single-Prize deck that will come out with this set. I should stress, these certainly aren’t the only non-V attacking decks you can play — but they are two of my favorites thus far! 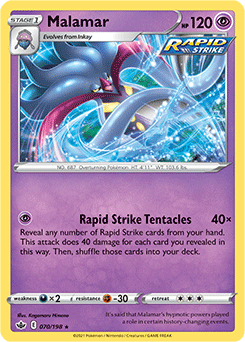 Rapid Strike Malamar is one of the few non-Pokemon V decks that was competitive during ADP’s reign; in fact, it still is a solid archetype to try if you want to play around with it in the pre-rotation Evolving Skies format. For those of you unfamiliar with Malamar, the main idea is that you build up a large hand of Rapid Strike cards, shuffle those in with Rapid Strike Tentacles to deal oodles of damage, then use various Abilities and Supporters to rebuild your hand and do it again. The key to the Malamar archetype is that you have to be able to replenish your hand every turn. In order to keep pace with your opponent, you’ll typically have to shuffle in four to six cards per turn, which likewise means you’ll need to have a consistent way to get those cards in hand every turn of the game. On top of that, since Malamar is a low-HP attacker, you’ll also likely need to get another Malamar and another Energy every turn, which puts even more pressure on you.

Now, there is an unfortunate catch here — you can only use one Rapid Strike Search per turn. Because of this restriction, you’ll want to have a secondary source of draw power, so that you can add cards even after the Rapid Strike Search for Korrina’s Focus. There are two main support Pokemon that Malamar lists have been playing: Inteleon (and Drizzile) and Cinccino. The Inteleon engine is popular in all sorts of decks right now, and gives you both the added consistency of Shady Dealings, along with extra damage every turn from Quick Shooting. As an added bonus, both Sobble and Inteleon are Rapid Strike cards, which means you can use any extra that you happen to have stuck in hand as a way to increase the damage of Rapid Strike Tentacles. Cinccino doesn’t have that bonus, but it does give you more cards every turn, which will likewise give you more cards to throw back into the deck with Rapid Strike Tentacles. Cinccino’s best attribute is that it allows you to discard your non-Rapid Strike cards, which both thins the deck and provides a nice damage increase. As a result, Make Do can translate into a +80 attack damage bonus if things go right.

While my initial build of this deck utilized the Inteleon support engine, I’ve come to prefer the Cinccino build after more thorough testing. It tends to be a bit less clunky, and since it is a Stage-1 instead of a Stage-2, it’s easier to fit in a thicker line. Unlike Drizzile, Cinccino also provides additional consistency throughout the game, which makes it a far more attractive option in the late-game. It also makes your deck less susceptible to inconsistency if your opponent aims to KO your Octillery, which is a fairly common strategy against this deck. So, while you can reasonably play either build, the Cinccino one is the one that I would recommend, and is the build that I have here:

The Pokemon in this list are limited to our three Stage-1 lines. While something like Crobat V or Jirachi could be useful, this deck tends not to have the bench space required to play those effectively. When playing Malamar, you’ll want to have two of both Inkay / Malamar and Remoraid / Octillery in play, so that if one gets Knocked Out, you still have a backup. Your other two spots will be used for Cinccino, or if facing a spread attacking deck such as Rapid Strike Urshifu VMAX or Jolteon VMAX, more Inkay / Remoraid. For our basics, I have a 3-1 split of the Inkay; this is so that against Shadow Rider Calyrex V, you can put a 60 HP Inkay on the Bench to prevent a potential double-KO by way of Astral Barrage. However, do be aware that the 60 HP Inkay is not a Rapid Strike Pokemon!