Pokemon has officially revealed Lunala from the 25th Anniversary Collection set, which will become part of our Celebrations set in October. 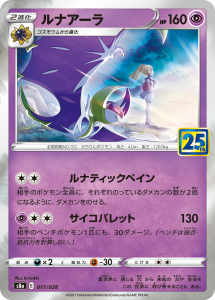 [C][C] Lunar Pain: Double the number of damage counters on each of your opponent’s Pokemon.

A high resolution image of the Lillie & Lunala playmat was also revealed: