Hello again to all PokéBeach readers! It’s Gabriel Semedo with another Pokémon TCG article and this time I’m going to look at Blaziken VMAX / Zeraora V, an interesting combination that came with the arrival of Chilling Reign.

The Potential of Blaziken VMAX 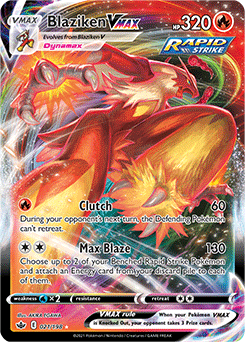 As soon as I saw Blaziken VMAX for the first time, I realized that it would be necessary to do a brief research on all the Rapid Strike cards available so far to understand their potential, and because of that I decided to leave Blaziken VMAX to my second article after the arrival of Chilling Reign — I would need a little more time to explore this Pokémon.

To be honest, I thought it would take more work to identify the best variation of Blaziken VMAX, but after a bit of research and testing, it became clear that Zeraora V would be the best combination, not least because we don’t actually have that many cool Pokémon Rapid Strike options. Despite that, here are two honorable mentions about the Blaziken VMAX among other ideas; the first honorable mention is about inserting at least a one-one Blaziken VMAX line into the Rapid Strike Urshifu VMAX deck to help with Zacian V / Lucario and Melmetal-GX and many other things.

The other idea I thought had potential would be a deck with only Blaziken VMAX and four copies of Cheryl, that is, a strategy focused more on defending than attacking. The big problem with this strategy is that Blaziken VMAX’s attack does comparatively little damage in the current metagame; an attack that does only 130 damage isn’t capable of doing much, nor is it possible to KO Dedenne-GX in a single attack. It was then that I realized that Blaziken VMAX truly needs some other Pokémon to help…

With all these studies and tests in mind, I came up with a list of Blaziken VMAX / Zeraora V that I really liked. We already know that Mew will be a huge problem, and we need a proper metagame for the deck to emerge as one of the best competitive options, but I see both of these problems being solved in this current format. During the analysis I will tell you more details about the strategy and the competitive potential of the deck, so let’s go to the list and the explanations!

This deck is not that fast or consistent at the start of the game, but the high damage done by Zeraora V‘s attack is able to keep up the pace. The strategy is simple, the idea is to hit Blaziken VMAX while energizing Zeraora V on the Bench to then use its strong attack, but to accomplish this simple task we need to perform several actions in a few turns…

To extract the maximum potential from the deck we need to use a lot of space on the Bench to place the Pokémon we need for the strategy, which unfortunately results in less space to use Dedenne GX, Crobat V or Eldegoss V; without being able to use these Pokémon much, the idea is to adopt a slower strategy to perform the setup, but with consistency.

Although Mew is a Pokémon that causes serious problems to the deck as it prevents damage caused by Zeraora V on the Bench, oddly enough this Pokémon is not as popular in the metagame as it seems. Some of the main decks of the format cannot use Mew; Shadow Rider Calyrex VMAX decks end up not having space on the Bench as they need many copies of Shadow Rider Calyrex VMAX on the field in addition to another attacking Pokémon and possibly Dedenne GX or Crobat V, Eternatus VMAX has no way to play it, it doesn’t make much sense in Zacian V / LucMetal as the deck already has Full Metal Wall GX and Metal Goggles to reduce damage to the Bench, and finally, Arceus and Dialga and Palkia-GX / Zacian V needs space to play Dedenne GX, Crobat V, and Mawile-GX.

In my opinion, these are the best decks of the format, while other decks like Pikachu and Zekrom-GX and even Rapid Strike Urshifu VMAX, which in theory are unfavorable matchups, are not so well-positioned currently because of this new metagame that is emerging.

We know that the metagame constantly evolves and changes, but if the meta stays that way we can use the full potential of Zeraora V without worrying so much about Mew, and then I think Blaziken VMAX / Zeraora V can become a Tier One deck.

Advanced Member
Member
What do you think about this deck's prospects post-rotation? We lose almost no cards (phione/koko being the two of note), and eliminate our biggest blocker (mew) outright. This deck seems like it is currently being slept on in terms of post-rotation development thought. Was curious what your ideas are on how this deck changes with EVS.
You must log in or register to reply here.
Share:
Facebook Twitter Reddit Pinterest Tumblr WhatsApp Email Share Link