Hello everyone! This is Grant Manley here once again. Today I’m going to talk about a crazy-aggressive deck I’ve been playing lately; Turbo Victini VMAX.

This deck has great matchups in the current format, and it transitions even better into the post-Chilling Reign format. As usual, I’ll be covering the list and matchups, and at the end, I also want to go over some overlooked cards from the new set.

Victini VMAX has been an established archetype from the moment Battle Styles dropped. It does 220 damage for only two Energy, which applies fast pressure against any deck that uses Pokemon V, so as more and more powerful Pokemon V get released, this card will only keep getting better and better. This list is focused on getting the turn-two Max Victory plus Boss's Orders to overwhelm an opponent by disrupting their board and applying fast pressure. 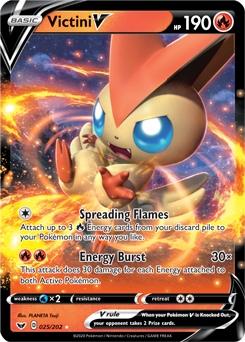 Traditional Victini VMAX lists choose to play Jirachi, Scoop Up Net, and other techs that can be used with Scoop Up Net. In exchange for the “boost” in consistency that Jirachi offers, they trim down on the Victini line as well as other essentials such as Dedenne-GX, Crobat V, Giant Hearth, Boss’s Orders and Pokégear 3.0 — I prefer cutting the many unnecessary cards and focusing on speed and consistency.

This deck’s goal is to attach an Energy to Victini V turn one, and follow it up with Victini VMAX, Energy, and Boss’s Orders on turn two — the other attackers in this deck are situational or backup attackers. Victini VMAX is all but useless if the opponent has no Pokemon V in play, and this is a reality that we must face every once in a while.

Although this deck works best when going first, you often choose to go second against decks that prefer to go second, such as Pikachu and Zekrom-GX. When going second, you are forced to play like a normal Welder deck, often digging for a turn-one Libra Horn or Double Blaze GX. You’ll find that the games differ greatly depending on whether you’re going first or second.

I play one of the “bad” Victini V  because it’s better for the early game. Every so often, its second attack or low Retreat Cost comes in handy. For the most part though, particularly past the first turn or two, the original Victini V is superior. Four VMAX is a lot, but in most games, we absolutely need it by turn two, and we want to maximize the odds of that happening. Some games will actually have you use three VMAX, retreating between them when one gets damaged.

Without Jirachi’s Stellar Wish, we rely on these cards to aggressively dig through the deck to find the cards we need. Your Bench often gets clogged, but the goal is to end the game fast enough so that it doesn’t matter.

This deck is committed to always having Giant Hearth in play. Marshadow counters problematic Stadiums such as Path to the Peak, Power Plant, Chaotic Swell, and Wondrous Labyrinth Prism Star. Since this deck plays eight Pokemon search cards in addition to the Marshadow and four Giant Hearth, it consistently deals with these Stadiums as if they were nothing. Marshadow can be useful in nearly every matchup.

Victini VMAX’s game plan in many matchups is to snipe Pokemon V with Boss’s Orders, however, Victini VMAX can’t KO Dedenne-GX, so Cramorant V comes in for an easy two Prizes against Dedenne-GX when needed.

Beak Catch is useful on slow turns when you have nothing better to do, though hopefully, you won’t have to use Beak Catch often. Against any deck with Dedenne-GX, Cramorant VMAX easily wins one-third of the game in one attack, which makes it an efficient and powerful option for this deck.

Reshiram and Charizard-GX is particularly useful against PikaRom and even sometimes Arceus and Dialga and Palkia-GX. When going second, this deck has the option of a turn-one 200 damage attack, which is incredibly strong most of the time. On top of that, it can be followed up with Flare Strike + Boss's Orders, which is insane pressure and helps end games fast. Additionally, Reshiram and Charizard-GX is a strong backup attacker when Victini VMAX is unable to do 220 damage like normal.

Galarian Rapidash V is situational but amazing against three-Prize Pokemon, particularly against Tag Teams where Victini VMAX doesn’t do much damage — a turn-one Libra Horn against Tag Teams is often enough to swing the game in your favor. Against PikaRom, they won’t have the immediate means to dispose of Galarian Rapidash V, so you can use Libra Horn against another target before it goes down.

Galarian Rapidash V is also useful against Pokemon that can evolve into VMAX. For example, when going second you can snipe a benched Eternatus V to put the VMAX into Max Victory KO range.

The Trainer lineup is considerably straightforward and probably self-explanatory. The one-of Cherish Ball may look strange, but it’s basically an extra search/draw out, it’s quite limited compared to Quick Ball and Pokémon Communication, but I wanted this spot to go towards consistency, and Cherish Ball seemed like the best fit for that.

You could possibly play a Supporter here like Professor's Research or Marnie.