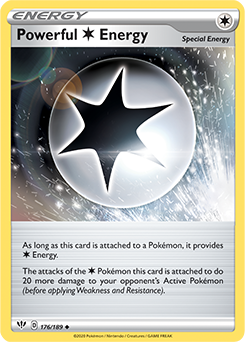 Hello to all PokeBeach readers. Here is Gabriel again with another Pokemon TCG article. This time, I want to share an interesting deck idea that I created called Powerful Box. This is a Welder Box with Colorless-type and Fire-type Pokemon using Powerful Colorless Energy to increase the damage of Colorless-type Pokemon. The addition of this Special Energy gives it enough power to the point of being interesting in the current metagame.

My favorite deck of the format is still Victini VMAX / Mewtwo and Mew-GX. It is a deck I use to play in all online tournaments I have participated in. Since my article about Victini VMAX here at PokeBeach, I decided to test several other cards that could improve some matchups that have started to appear more. I decided to try Mega Lopunny and Jigglypuff-GX to deal with Mewtwo and Mew-GX Psychic box and Pikachu and Zekrom-GX. I even tested Stoutland V to deal with Mad Party after losing important games against this deck. They were techs until effective, but I felt that they needed to be a little stronger to work better and have more utility for other matchups.

Thinking about it, I decided to research some way to improve these techs. I remembered Powerful Colorless Energy, a Special Energy capable of increasing 20 damage when attached to my Colorless-type Pokemon. I was able to incorporate the addition of this Special Energy and several other ideas, plus I found other interesting options resulting in a strong, different, and original list. I like to have the chance to play against all decks of the format and despite having some consistency issues, I really believe in the power of this deck.

I hope you like the Powerful Box, let’s review the deck!

With more Mewtwo and Mew-GX decks in the format, naturally this Pokemon becomes a good option. The problem is that Mewtwo and Mew-GX decks can work without having to play many Pokemon-GX onto the Bench, which means Mega Lopunny and Jigglypuff-GX is not as effective as it looks. Normally Mega Lopunny and Jigglypuff-GX hits for 240 damage if the opponent has three Pokemon-GX on the field, not enough to Knock Out a Mewtwo and Mew-GX. But with Powerful Colorless Energy and Galarian Zigzagoon, this adds up to 270 damage.

The idea to use Stoutland V came because of the bad matchup that Victini VMAX / Mewtwo and Mew-GX has against Mad Party. I started to lose competitions when I needed to face Mad Party in tournaments, so I searched for a tech for this matchup. The problem is that Stoutland V is useful only against Mad Party and useless for any other matchup. With Powerful Colorless Energy and Galarian Zigzagoon, Stoutland V is able to Knock Out 70 HP Pokemon like Jirachi and Galarian Zigzagoon.

This is a Pokemon with the potential to Knock Out a Tag Team Pokemon-GX during the at the late-game, but with Powerful Colorless Energy and Galarian Zigzagoon, Dubwool V has the potential to take more important Knock Outs that it could not do before.

When we have several Pokemon V options, Ditto V becomes a great addition especially when we may need to use the same Pokemon twice. Against Mad Party, being able to use two Stoutland V without needing two copies is very good. The same goes for Dubwool V, Victini V and Cramorant V.

You can play Ditto V in response to your opponent’s actions. For example, if the opponent plays Mew to prevent your Cramorant V from dealing damage to their Bench, you could convert Ditto V into Stoutland V. With Powerful Colorless Energy attached, Stoutland V can Knock Out Mew for two Prizes.