Hello, PokeBeach aficionados! Welcome back to another article. Today I will convince you that everyone’s old pal Zoroark-GX is back to stay in the Expanded meta! It’s been a while since Zoroark-GX has seen any play, dating back to Zoroark-GX / Garbodor variants of yesteryear. However, Zoroark-GX has seen a resurgence by becoming the de facto consistency partner and general damage baton for a few different strategies. Today, we’ll be revisiting my old favorite of Zoroark-GX / Counters.

Zoroark-GX in the Current Expanded Format

Before we explore what tricks Zoroark-GX has up its sleeve with the latest sets, there’s been an important change in the Pokemon TCG since its dominance: The first turn rule! Because you can’t play Supporter cards on the first turn anymore, Zoroark-GX variants have struggled with consistency issues (ironic, I know). The ban limits Brigette, the creme de la creme of setup Supporters, from fetching multiple Zorua going first. This puts any Zoroark-GX variant on the back foot from the get-go since deck builders have to overcompensate their list with extra ‘Ball’ Trainer cards for the 50% of games where Brigette can’t be played. Overcompensation with early search usually means less space in a deck list for techs, other consistency, and overall options on how to play a deck.

Expanded is a fast-paced format: Pikachu and Zekrom-GX is expected to use Full Blitz on the first turn, Arceus and Dialga and Palkia-GX can Altered Creation GX for a single attachment via Double Dragon Energy, and many more. Because of the terrifying speed of these popular decks, being able to evolve Pokemon is a premium! Of course, there are exceptions like Rowlet and Alolan Exeggutor-GX / Vileplume, but without any way to disrupt or slow down the opponent as Vileplume can do, there aren’t enough turns in a Pokemon game to evolve your Pokemon, attack, and win. You might point to Pokemon VMAX as a counterexample, but they have the benefit of 300+ HP allowing them to withstand attacks. The lowly 210 HP on Zoroark-GX can be reached by almost all Expanded meta decks.

I say this to emphasize the fact that Zoroark-GX variants right now are always behind in the Prize race. Early KOs on Zorua, etc. are to be expected and it’s unreasonable to expect a few turns to evolve, use your Trade Ability multiple times, and attack with Riotous Beating or Garbodor‘s Trashalanche enough to take all six Prizes. Additionally, as the length of games in Expanded shorten, the benefits of Trade as a form of consistency drops as well since there are fewer turns to use it.

To pile onto this dreary train of thought, Sudowoodo is extremely popular right now! Sudowoodo is a standard inclusion in nearly all Pikachu and Zekrom-GX decks, Coalossal VMAX decks, and Roxie / Garchomp and Giratina-GX decks. Sudowoodo cripples Zoroark-GX variants in the way a Razor scooter hurts your shin. Sudowoodo limits your Bench to a maximum of four Pokemon, which often means having only one or two Zoroark-GX especially if you need to play Tapu Lele-GX or Dedenne-GX.

So, now that I have sufficiently explained how big of a pickle Zoroark-GX is in, let me show you why you should give it a chance:

That’s right –  Zoroark-GX / Counters is back! I based this list off of a second-place finish Pedro Torres took at a large online tournament, but I found some areas that I thought could be improved.

The deck as a concept addresses a lot of what we discussed above. Since it *wants* to be behind on Prizes to utilize Counter Energy, being slow doesn’t hurt this variant as compared to others. Secondly, Sudowoodo isn’t a death sentence as the deck runs Alolan Muk. The point of the deck is to use Zoroark-GX’s Trade Ability as a way to stream Pokemon that make use of Counter Energy, which in turn take Knock Outs on multi-Prize Pokemon while being only a single Prize Pokemon themselves. Because many meta decks rely on using three Prize Pokemon, the ratio of damage to Prize is tremendous for this deck. Any single-Prize deck will be difficult to play against for this deck since it relies heavily on that Prize ratio to get across the finish line first. There are a few techs to deal with single-Prize decks, specifically Oricorio for Mad Party, but this deck is meant for a sparse single-Prize field.

In the history of Pokemon TCG tournament dominance, Zoroark-GX is the best card ever printed — a full four copies of Zorua and Zoroark-GX is a must. Although Zoroark-GX acts more as consistency in this deck, Riotous Beating is useful to set up two-shot Knock Outs on three Prize Pokemon. However against Dragapult VMAX, Zoroark-GX does end up taking the lead role as the main attacker because of Dragapult VMAX’s Darkness-type Weakness.

Two Tapu Lele-GX is the minimum since one is used to grab Brigette and the other is used to get a draw Supporter throughout the game. Pedro’s tournament list included two copies of Crobat V, but I swapped one for a Dedenne-GX. With Trade, the effect of Dark Asset is less useful since there will be cards that can’t be played down. On the other hand, Dedechange will always be an option to reach for a key response KO with a Counter Energy attacker. Lastly, unlike Crobat V, Dedenne-GX can be searched by Cherish Ball.

One Ditto Prism Star, One Alolan Muk, One Cofagrigus, One Oricorio, No Electrode-GX and No Mew UNB

The versatility of evolving into many different pieces makes Ditto Prism Star one of the most important pieces for this deck, especially if your opponent uses Guzma to KO your Alolan Grimer or Yamask.

Alolan Muk is a necessary evil for this deck since its Power of Alchemy Ability shuts off Sudowoodo’s Roadblock. In addition, Alolan Muk and N can be combined to be used as a pseudo-Garbodor‘s Garbotoxin-N comeback strategy, shutting off almost all common Abilities to drawing more cards. 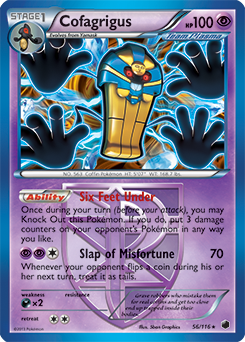 Another amazing inclusion in this deck is Cofagrigus. Its Six Feet Under Ability forces the opponent to take a Prize card, whether they like it or not. Since the opponent will usually try to minimize Counter Energy’s effect, having a way to ‘switch on’ Counter Energy is extremely important to close games. On top of this, Six Feet Under also places three extra damage counters on the opponent’s board. While this usually doesn’t matter since our Counter Energy attack will KO, it has come in handy to boost Riotous Beating’s output. I tried out Electrode-GX instead of Cofagrigus since its Extra Energy Bomb Ability can grab some Energy cards from the discard pile with its effect, but giving up two Prizes was too much so Cofagrigus fits our intended purpose better. Because it’s important to access Cofagrigus throughout the game, I opted to include a Yamask too, rather than depend on Ditto Prism Star. Having both Yamask and Ditto Prism Star means that Six Feet Under can be used twice if you do need to place six damage counters in a pinch.

Oricorio is another card that has come in clutch for this deck. Of course, Supernatural Dance is here for Mad Party, but it can be used against Mew / Cramorant V to Knock Out a Mew FCO for any Energy.

Speaking of Mew, I also tried out a Mew UNB in here to prevent any issues with Cramorant V’s Spit Shot, Pikachu and Zekrom-GX‘s Tag Bolt, and Garchomp and Giratina-GX‘s Linear Attack. However, in all of the matchups that Mew UNB would boost, the deck would handily win anyway (something about single Prize Pokemon are better than three Prize Pokemon when trading Knock Outs?)