Hello PokeBeach readers! With a few events in this format behind us we have seen some decks shine and others lose their touch. Arceus and Dialga and Palkia-GX (ADP) is as strong as ever, maintaining its spot as the best deck in format. However, we have seen a new version of Mewtwo and Mew-GX featuring a Lightning-type package alongside Aurora Energy and tech attackers.

In this article though, I will be going over a deck that was once again underestimated at the beginning of the format but has proven to be a top contender in any event, Eternatus VMAX, along with an analysis of a deck I think has some potential but isn’t ready for tournament play, Togekiss VMAX.

Pros and Cons of Eternatus VMAX

Aside from its obvious large amount of HP and high damage output, Eternatus VMAX has more upside then arguably any other deck in the format. Eternatus VMAX being weak to Fighting-types is a huge upside in the current meta. We have seen signs of Coalossal VMAX and a bit of Sandaconda V, but neither of these decks has what it takes to deal with the rest of the format. Even if Fighting-type decks had a place in the current meta, Eternatus VMAX has ways to deal with it because of its flexible Energy cost. This is something that gets overlooked fairly often, but a flexible Energy cost makes a big difference on how good a card can be in any given meta. Since Eternatus VMAX attack has one Colorless Energy cost, it can use Capture Energy to make the deck more consistent or fix its Weakness with Weakness Guard Energy to deal with a specific meta. This advantage may look small, but if you look at a card such as Dragapult VMAX, that deck had to completely reinvent itself when its Darkness-type Weakness entered the meta in Eternatus VMAX. Unlike Eternatus VMAX, Dragapult VMAX’s attack requires two Psychic Energy, but if it had a Colorless Energy cost it would play Weakness Guard Energy.

In the current Standard format there is an argument to include a one-off Fire Energy in an Eternatus VMAX deck. This is similar to M Manectric-EX decks in the past that used to play a one-off Fighting Energy — it didn’t hurt the consistency of the deck as M Manectric-EX has one Colorless Energy in its attack cost and it could use this Energy if the opponent ran Scorched Earth. With Eternatus VMAX, a single Fire Energy allows the deck to search for Energy using an opponent’s Giant Hearth without hurting the consistency of the deck. The final upside of Eternatus VMAX is that it doesn’t need much to function. The biggest requirement on the card is for all the Pokemon on your Bench to be Darkness-type to have Eternatus VMAX’s Ability active, which is not a bad drawback when considering the Darkness-type Pokemon we have access to. This leaves a lot of space in the deck to maximize consistency or find tech options for matchups that are harder for the deck to deal with.

The second flaw with Eternatus VMAX is its lack of Energy acceleration. This is arguably the biggest flaw with the deck, as without a consistent form of acceleration there is no way for the deck to respond if your Eternatus VMAX were to be KO’d on turn 2 because you need two more turns to attach Energy. This is why cards such as Crushing Hammer or Team Yell Grunt are great against an Eternatus VMAX deck to get free turns. To further this point, I will use an analogy given to me by a friend. In Magic: The Gathering there is a card called Time Walk which reads “Take an extra turn”. So when an opponent flips a heads on a Crushing Hammer or uses a Team Yell Grunt against Eternatus VMAX, it is as if they played a card that says “Take an extra turn” because Eternatus VMAX has no way to revert what happened to them. They have to reattach the Energy, setting them behind a full turn and making them miss attacks. This flaw has become so apparent in the meta that even aggressive decks like Pikachu and Zekrom-GX or ADP have started to play Crushing Hammer to have an advantage against Eternatus VMAX.

The final drawback I want to talk about is the requirement to use all Darkness-type Pokemon. As I mentioned earlier, this isn’t a drawback because we have access to Crobat V and Galarian Zigzagoon. But because Eternatus VMAX needs all Darkness-type Pokemon, it cannot play some tech Pokemon of a different type to apply Weakness in a harder matchup — even though it has a flexible Energy cost. This limits Eternatus VMAX to only Crobat V as a consistency option, while other decks have access to Eldegoss V and Dedenne-GX.

Obviously Eternatus VMAX is the main attacker in the deck, meaning there needs to be a higher count to keep the deck consistent. However this usually means playing three copies to avoid bad Prizes and to draw into them more often. There’s a few reasons to max out the number of Eternatus VMAX in the deck as opposed to using the space for something more useful. To start, the deck plays Great Ball which isn’t a guaranteed search, so maxing out counts gives you a much higher chance to find a specific Pokemon. This deck doesn’t run any recovery cards like Ordinary Rod either, so discarding an Eternatus VMAX or two can be detrimental if you only play three copies. Finally, aside from the two copies of Pokémon Communication there is nearly no targeted search cards for Eternatus VMAX, so a higher count allows you to draw into the card itself often. You might be asking, why not play more Pokemon Communication or a few copies of Evolution Incense? This is because these cards are inherently inconsistent. Sometimes you may not have a Pokemon in hand when you want to use Pokemon Communication. Plus with Pokemon Communication, you give up two cards to search for one Pokemon and unlike Quick Ball, the Pokemon goes back into your deck and could clutter your hand later in the game. Evolution Incense has no real value as it can’t search for anything except Eternatus VMAX.

In all honesty, Sableye V is a fairly bad card. It serves as this deck’s attempt to beat Zamazenta V but realistically it’s another Darkness-type Pokemon for your Bench. Aside from being a Zamazenta V counter, Sableye V acts as a finisher that you don’t have to evolve. For example, if you are going to attack a Pokemon VMAX that you won’t OHKO, you can attach an Energy to Sableye V as opposed to Eternatus V. This is so you only need to find another Energy card to finish the KO, instead of searching the Energy and an Eternatus VMAX.

This is probably the part of the list I’m least satisfied with. I think this deck would like a higher Supporter count, but it lacks the space and more Supporters could make the deck less consistent in the early stages of the game. This deck relies on Crobat V to make its early turns consistent and gives the deck the burst potential it needs to keep pace in the current meta. But because the deck relies so heavily on Crobat V, a high count of Supporter cards will clunk your hand making Crobat V less effective. This leaves the deck in an awkward state of trying to maintain a count of Supporters that both keeps the deck consistent as well as allows Crobat V to flourish.

Now I might sound like a broken record if you’ve read my other articles, but Reset Stamp combined  with Power Plant is the best combo in the game. Rather then tell you why it’s so good I want to bring up examples of similar combos proving how strong this combo is. The first example is probably the most well known and that is N combined with Garbodor. This is the strongest version of the combo and was relevant throughout its entire existence. Garbodor as opposed to Power Plant shut down all Abilities, which made it inherently stronger. But this doesn’t take away from how strong Power Plant is. While weaker in general, Power Plant takes away Dedenne-GX‘s Ability — the draw engine for most decks in this format. The second example uses N with Silent Lab, a more relatable comparison to Power Plant. This combo saw play in the Expanded format Ultra Necrozma deck as well as the Night March deck. Both of these decks utilize single-Prize Pokemon making it easy for opponents to be down to one Prize card. This results in an N plus Silent Lab combo to leave the opponent with one hand card and make them unlikely to draw out of it. This example is similar to current Standard format situations where the opponent is often left with a single Prize card after taking a KO on a three-Prize Pokemon and two-Prize Pokemon. As you can see, this isn’t a new combo by any means but it has been a dominant force in the game. I believe if your deck can use the combo effectively, you should try and find the space for it in your list.

Earlier, I mentioned Eternatus VMAX’s flexible Energy cost allows the deck to play one Fire Energy that can be searched through your opponent’s Giant Hearth. It might seem strange to play this over a Capture Energy when that is more relevant most of the time, but that is because of the amount of Giratina people have been playing. Eternatus VMAX has a hard time dealing with Energy disruption, so including a Capture Energy gives your opponent a chance to take a game because they ran a Giratina. I felt 10 Energy cards was the right amount as you need to make sure Crobat V is getting value, if you ran too many it would clog your hand.

To wrap up my thoughts on Eternatus VMAX, I believe it is a solid Tier 1 deck that can thrive in nearly any meta but doesn’t have the wow factor that makes it overwhelmingly appealing. When comparing Eternatus VMAX to a deck like Arceus and Dialga and Palkia-GX, it falls flat in comparison due to the shear volume of options that ADP has. Eternatus VMAX is a linear deck that tries to do the same thing every game, but that isn’t a bad thing. Eternatus VMAX outclasses most decks in its consistency and ability to tank some hits, making it a great option for newer players as well as veterans of the game. 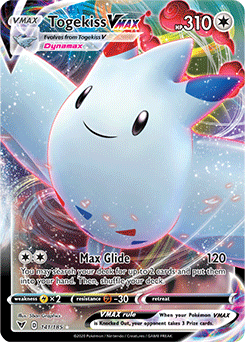 I am going to briefly analyze Togekiss VMAX, a deck I’ve been working on the past few weeks. In my Vivid Voltage set review, I said this is one of the stronger cards that was released. While it hasn’t seen any major results, Togekiss VMAX has the tools to adapt to this meta and cement itself as a contender.