Hello PokeBeach readers! Today I’m bringing you my first article on the Expanded format. Expanded has notoriously been a format that many top players have dreaded playing because of its extremely fast pace, but recently it has been an outlet to escape the Arceus and Dialga and Palkia-GX-dominated Standard format. While ADP is still relevant in Expanded, most decks are equally as fast and have some form of a comeback mechanic to help the matchup. In this article, I will be focusing on a deck that has dominated since its first appearance four years ago; Turbo Dark. 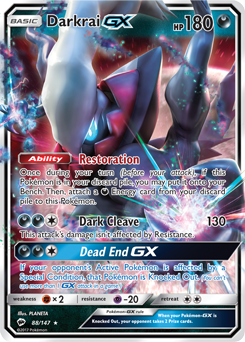 Turbo Dark has been one of the most successful decks of all time, and that’s for good reason! Turbo Dark’s aggression is its greatest strength — by out-speeding the opponent with Greninja and Zoroark-GX it is hard for most decks to keep pace. It also has some advantages going into a format that now includes Pokémon VMAX. Darkrai-GX allows this deck to one-shot any Pokémon VMAX using its GX attack, giving the deck a free option to take any early Knock Out. Without this GX attack, decks like Eternatus VMAX and Coalossal VMAX would run over Turbo Dark because of their high HP and ability to one-shot anything in the deck.

Darkrai-GX is not the only one-shot option this deck has access to; Umbreon and Darkrai-GX can also one-shot, and it’s much stronger as it also applies a Trainer lock. This GX attack comes into play mostly against ADP and other decks that can maintain Prize trade with Turbo Dark. The Trainer lock is helpful, specifically against ADP, as it stops your opponent from setting up a return attacker using Metal Saucer which is their only way to respond late in the game. Umbreon and Darkrai-GX can also be helpful if you go second and are in a position to use the GX attack on turn one, stopping the opponent from any relevant set-up on either of their first two turns. Lastly, Turbo Dark is one of the few decks that can easily handle Vileplume — between Galarian Weezing and Weavile-GX, Turbo Dark can easily handle any counters it may encounter.

This is one of Turbo Dark’s best matchups. Since Eternatus VMAX has to wait a turn to evolve, it allows Turbo Dark to take a free Knock Out before they even get to attack. This is then usually followed by a Prize trade which Turbo Dark wins as each player has to take three KOs, and as I mentioned earlier, Darkrai-GX allows you to one-shot an Eternatus VMAX, making the Prize trade favorable for Turbo Dark. You will often need at least one Guzma to win the game, so thinning as much as possible in this matchup is optimal to avoid a late-game N. I’d say this matchup is about a 70-30 in Turbo Dark’s favor, so this is a matchup you’re looking to hit in events.

While Turbo Dark does have Weakness to Coalossal VMAX, the matchup is fairly favorable for Turbo Dark. This matchup plays similarly to the Eternatus VMAX one, where both decks can easily maintain a Prize trade through gust effects and easy one-shots. Turbo Dark once again has the advantage, as it doesn’t have to evolve and gets to take the first Knock Out. This matchup then plays out the same as Eternatus VMAX where you trade KOs using Darkrai-GX to take a Knock Out on their Coalossal VMAX, then needing a Guzma to close out the game by Knocking Out one of their Bench sitters.

The one issue that can occur is when Coalossal VMAX runs Jirachi Prism Star; in this case, you can’t lead with Greninja and Zoroark-GX or your opponent will win the Prize trade by using Jirachi Prism Star when Knocking Out a two-Prize Pokémon, winning the game in two attacks. This can be solved by leading with your own two-Prize Pokémon, then using Guzma before you Knock out their Coalossal VMAX to OHKO their Jirachi Prism Star. You can also tech for this matchup by adding a Sudowoodo, making it hard for them to get their Jirachi Prism Star into play. This matchup is about a 60-40 in Turbo Dark’s favor without the Sudowoodo, however, with Sudowoodo it becomes much easier and about a 70-30 in favor of Turbo Dark.

Rowlet and Alolan Exeggutor-GX is one of Turbo Dark’s hardest matchups — between Vileplume and Decidueye it’s hard to have a consistent stream of attackers in the matchup. Turbo Dark does have some options; normally it runs Weavile-GX along with Mew, allowing them to attack both Vileplume and Decidueye (just not with the same Pokémon). When building a deck I wanted to make as much space as possible to optimize the list so I felt looking for a Stage 1, non-GX and non-V Pokémon that could hit both Decidueye and Vileplume would be a better option. This led to Galarian Weezing, which is helpful in multiple ways for this matchup; the Ability shuts off their Item-locking Vileplume, which makes it easier to take six Prizes, as well as having a low-maintenance attack that can easily KO either Decidueye or their attacking Vileplume. This matchup is overall still a 50-50, maybe slightly favored for Turbo Dark, but turn-one Item lock can’t be under-valued — if they get to go second and set up an Item lock sometimes the game ends there because Turbo Dark can no longer function.

I’d say this matchup is about a 50-50 because the Prize trade is so favorable for Lost March, however, Galarian Weezing can swing the matchup pretty easily because Lost March is so reliant on Abilities to keep them consistent. You can also tech for this matchup by including an Oricorio — that will often sweep their board. Oricorio is also a great card for stealing games because people often try to discard extra Pokémon in their deck late in the game. 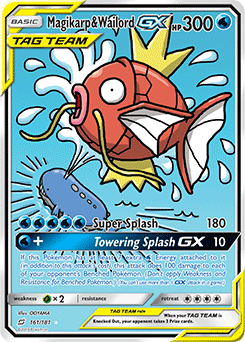 Umbreon and Darkrai-GX is also great in this matchup because of the Trainer lock — using Umbreon and Darkrai-GX to one-shot a big wall such as Magikarp and Wailord-GX or Moltres and Zapdos and Articuno-GX can stop the opponent from refilling their board a turn later, allowing you to get sneaky wins through a Bench-out. This matchup is overall favorable, however, it isn’t a free win — I would say its around a 60-40 in favor of Turbo Dark, but can become more favorable if you include a Mew or both Mew and Weavile-GX.

Arceus and Dialga and Palkia-GX

Arceus and Dialga and Palkia-GX, as usual, is aggressive and good at trading Prizes. In this matchup you want to lead with Greninja and Zoroark-GX to try and get an early one-shot on the opposing ADP. You can then go into Umbreon and Darkrai-GX for the KO on their Zacian V. By taking this Knock Out with Umbreon and Darkrai-GX, the opponent won’t be able to set up another Zacian V to respond and you’ll be able to close out the game on the following turn.

This game plan is fairly set in stone with the current list, as there is no way for Turbo Dark to win the game in two attacks while ADP will win with two Knock Outs every game. This can be dealt with by including a Target Whistle, allowing you to KO the same ADP twice, however, you would still need to use Greninja and Zoroark-GX first because most ADP lists will have a Cobalion-GX to stop Darkrai-GX from getting a free Knock Out. With the current list, I think this matchup is about a 40-60 in favor of ADP. With the right techs such as a Target Whistle, it can be swung into Turbo Dark’s favor.