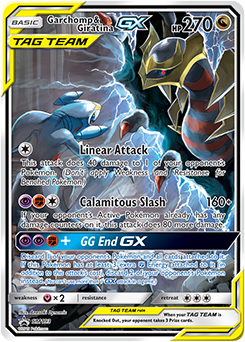 Hello again PokeBeach readers! As Christmas draws near, I have two of the best stocking stuffers for all Expanded format lovers; Amazing Box and Vileplume / Orbeetle VMAX / Dusknoir. These two decks have been projects of mine for a while, and although I have tried as hard as I can to make these on par with the likes of Expanded powerhouses like Pikachu and Zekrom-GX or Roxie / Garchomp and Giratina-GX, they do have their flaws simply by virtue of not being them. The good news, however, is that these two decks make up for their lack of total format domination in being true joys to play.

Pokemon card design has been a gripe of mine for the past few sets. Take for instance Tag Team Pokemon; they rile me up since they are simply a testosterone-boosted version of GXs (which also have the unique mechanic of GX attacks). Then Pokemon V were released, being almost carbon-copies of Pokemon-EX except for their slight upgrade in HP in order to match the rising power creep of the game. Lastly, Pokemon VMAX are huge behemoths that, barring unusual circumstances, were designed to be able to survive multiple attacks.

Ranting aside, the reason why I write about decks such as last week’s Coalossal VMAX / Electrode-GX and the two I have today is to share the more enjoyable side of the game, utilizing intricate strategies and fun Abilities. Because these decks are amusing, however, doesn’t mean they don’t pack a punch!

Here’s my Amazing Box / Ho-Oh-EX list that I’ve been crafting:

Wow! This deck is a blast and this isn’t the last time you’ll hear me say it.

The purpose of the deck is to get multiple Ho-Oh-EX into the discard in order to use the Rebirth Ability to attach three different types of basic Energy to it when restored to your Bench. In a moment of serendipity, it occurred to me that the new Amazing Rare Pokemon from Vivid Voltage are perfect matches for Rebirth as they each have wildly different Energy requirements to attack. You may ask, “How do you attack with the Amazing Rare Pokemon? Don’t tell me you’re going to use Energy Switch three times.” My answer is the next vital piece of this deck; Ninja Boy. Here, it is used in conjunction with Ho-Oh-EX to swap Ho-Oh-EX with the three Energy attached from Rebirth with any of the Amazing Rares included in the deck.

The strategy of the deck makes for certainly some odd card choices, so let’s dive into the explanations… 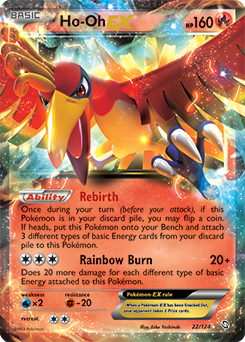 When it comes to Rayquaza, the damage is dealt for each unique type of Energy attached to it. This means if you are attempting to hit 320 damage in a single turn, you ought to wait to use Rebirth and Ninja Boy until you have an additional Energy card in your hand to attach manually. With Rebirth, you can then select the appropriate Energies from your discard pile so you have four unique types attached. With Ninja Boy, there must be a valid target inside the deck in order to successfully swap the two — this is why I’ve chosen such a large count of Rayquaza and Raikou; there always must be at least one in the deck.

Marshadow-GX is here to be a multicolored UNO card or sorts (copying any attacker you want), but it also has an interesting GX attack that is rarely used. Peerless Hundred Blows GX shouldn’t be forgotten as we can satisfy its requirement via our two copies of Fighting Energy. It typically hits for 200 damage flat, which isn’t anything to scoff at.

Zamazenta is here for Amazing Shield: a vanilla 180-damage attack that doesn’t discard any Energy while also being useful in some fringe VMAX matchups, like Dragapult VMAX / Garbodor, in order to buy some time.

Note: that any fewer than the full four copies of Ho-Oh-EX is asking for trouble when it comes to Rebirth flips.

Ah, we come to the true engine of the deck. Discarding a large hand with Dedechange is a common occurrence, as reaching for the turn-one attack is always necessary. Crobat V is also great for when you have some resources to preserve, however, using both in the same turn is what makes this deck a real treat. There are large amounts of both cards since we end up using two or three per game and we don’t want to stumble if any are in the Prizes.

Oranguru and its Primate Wisdom Ability is here for many different situations. It can be used to preserve a card before using Dedechange, or to put an Amazing Rare Pokemon from your hand to the top of the deck to be put into play immediately with Ninja Boy. Of course, it also allows you to reach one more card, so I count it as consistency.

One Buzzwole and Pheromosa-GX, One Mew

With four different Energy, Rayquaza caps at a maximum of 320 damage. This is just short of the 330 mark of Coalossal VMAX’s HP, before any Stone Fighting Energy come into play. Pheromosa and Buzzwole-GX fills the role of OHKOing Coalossal VMAX with Elegant Sole. Jet Punch is also relevant to set up math, so don’t forget about it. Lastly, Beast Game GX is a complimentary attack to Raikou’s Amazing Shot to take three Prize cards on a Dedenne-GX. Beast Game GX can be useful in many more situations, but most importantly versus Mew / Cramorant V to help swing the Prize trade by KOing a Mew. Similarly, Bench Barrier Mew is needed for the same matchup and for Tag Bolt GX as there are many targets on the Bench. This Mew is also useful for its Psypower attack, which is helpful for math, like Jet Punch, against several matchups to set up Knock Outs.

Yep, you read that correctly — the only Supporters in this deck are two copies of Ninja Boy and a copy of Guzma. Of course, we also have pseudo-Supporters in the form of VS Seeker. The reason for such low counts is simple: we need only three copies in the deck. With Battle Compressor, VS Seeker is a good way to find Ninja Boy on repeat.

Holy consistency, Batman! I love the counts of these cards. The deck feels like a revving engine, yearning to take off at any moment. There is a certain nostalgia to these, as they’re calling back to the Maxie's Hidden Ball Trick / Yveltal and Archie's Ace in the Hole / Blastoise decks of old. Battle Compressor is one of the best cards in this deck, thinning your deck of Ho-Oh-EX and Energy faster than you can blink. The rest are simply gasoline for said engine.

Float Stone is considered to be a part of the ‘combo’ needed to get a turn-one attack off, hence the three copies, and Great Catcher is another card that has proven itself. With Ninja Boy taking up the Supporter of turn almost every time, Guzma can rarely shine and lets Great Catcher take the spotlight (the only reason I have kept Guzma over a second Great Catcher is due to Special Condition issues such as paralysis along with it being VS Seeker-able). Rescue Stretcher is here to shuffle in Pokemon for Ninja Boy and is marginally better than Ordinary Rod since it can fetch a Dedenne-GX or Crobat V in a pinch, though Ordinary Rod does allow you to shuffle in Energy and only one fewer Pokemon (since there aren’t many Pokemon you want to return to the deck).

Wide Lens was originally in the list for the purpose of copying Raikou with Marshadow-GX to take four Prizes on two of Dedenne-GX or Crobat V. However, this happened more rarely than the grief the card gave me, so I ended up cutting it for the third Float Stone. Muscle Band / Choice Band were other Tools I played around with, letting Rayquaza hit Tag Team Pokemon for OHKOs, but I found myself being able to simply attach another Energy to Rayquaza in lieu. Muscle Band and Choice Band do little to boost math for Raikou and Zamazenta, unfortunately.

The Energy split is based on overlap in Energy costs. Rayquaza and Raikou both take a Lightning Energy and a Grass Energy, making their copies a little more valuable.