Hello PokeBeach readers! In this article I am going to go over a deck that I always ruled out as plain bad — now I confidently think it’s in the running for the best deck in the format.

That deck is ‘Fire Box’; during the pre Covid-19 season we saw Tord Reklev achieve Top 4 at the 2019 World Championships, and Robin Schulz winning the Latin America International Championship with a version of this deck. While this deck did have strong placements, it was deemed inconsistent and underwhelming overall. This stemmed from the decks need to run upwards of 18 Energy to accommodate for Victini Prism Star, along with the natural inconsistencies of a Welder deck — it was doomed to be inconsistent. At the time, the deck also had to run Ninetales as its primary gust effect which added another level of inconsistency to the deck and causing most players to see the deck as “too risky” for larger events. I think, however, its time for that inconsistent label to be shed and for Fire Box to become the top tier deck it once was.

The most significant change to Fire Box is no doubt the removal of Ninetales. With the release of Boss's Orders and reprint of Pokémon Catcher, Ninetales has become inferior in every way to simply running these Trainer cards. This change made the deck significantly more consistent because it no longer needs to rely on Pokémon Communication to find a gust effect. This also removed all threat of decks KOing the Ninetales and removing the option for a gusting effect completely. This change alone makes Fire Box a more reliable deck that can consistently compete with the other Tier 1 decks. 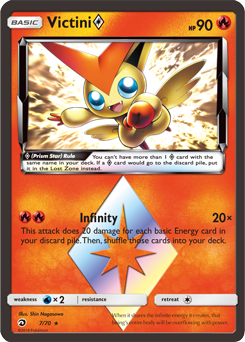 The second big change is the rotation of Victini Prism Star; while it wasn’t mandatory to run Victini Prism Star, it was a good inclusion as it allowed the deck to take big OHKOs on opposing Tag Team Pokémon. However, now that Victini Prism Star has rotated this deck can reduce the number of Energy it plays and create space for more consistency cards such as Pokégear 3.0 and even Judge Whistle.

Which brings me to my next point; Fire Box is a deck that wants to maintain a constant steam of attackers and try to finish the game in three or four turns. Judge Whistle allows this deck to consistently execute that strategy by essentially giving you a 56-card deck, making it much easier to find the important cards such as Welder every turn.

Finally, the biggest upside Fire Box has currently is its typing. This format is dominated by Zacian V, making Fire arguably the best type in the game. When building this deck my focus was to find a way to counter Zacian V but remain competitive against the rest of the format. You may be thinking this goal can be achieved by including Centiskorch VMAX, but Centiskorch VMAX is the opposite of what I’m trying to accomplish with this deck — Centiskorch VMAX requires an evolution, another natural inconsistency that can be avoided with Fire Box.

These upsides allows Fire Box to consistently dominate the majority of the meta, without including inconsistent gimmicks such as Crushing Hammer, or inconsistent Evolution Pokémon.

Talonflame V is a great utility attacker which the deck truly needs. It acts as the deck’s pivot, and with free retreat you are looking to bench Talonflame V every game to act as a pivot as well as a surprise attacker to take Knock Outs on Dedenne-GX and Zacian V.

Talonflame V fits a role in this deck that no other card does efficiently; it has a three-Energy attack that can Knock Out Dedenne-GX. When building the deck this was a specific requirement I was looking for. This allows you to have no Energy on board, then use a Welder in combination with a Pokémon Catcher to find an easy two Prizes. Talonflame V not only helps the decks consistency by providing a pivot for the deck, it allows the deck to refresh its hand going first to get a head start on the opponent and potentially avoid benching a Dedenne-GX.

Heatran-GX functions as the deck’s big one-shot Pokémon. It thrives in the VMAX matchups because it allows the deck to rush a turn two one-shot on the opponents VMAX, then play the rest of the game targeting their Bench sitters and avoiding a Prize trade against the high-HP VMAX Pokémon. Heatran-GX also comes in against Zacian V because its attack only requires three Energy and has no drawback, making it more efficient than Talonflame V. Other than those instances, Heatran-GX doesn’t see much use. This is because 130 damage isn’t enough to compete in most matchups, and Reshiram and Charizard-GX is able to deal with Pokémon under 300 HP better as it can still be a relevant attacker after using its GX attack.