Why Expanded? First off, it is a format with a lot of gas in the tank and there is a ton to go over since my last article on it. Second, the Expanded format is so much more fun than Standard now. With the new bans breathing life into the format, there are good ideas around every corner. To top it off, there’s consistency galore in Tapu Lele-GX, Ultra Ball, and more to help your deck operate as planned. To succeed in Expanded, all you need is a good idea, some persistence, and a good battery (c’mon, there’s no reason PTCGO needs that much CPU).

Let’s start with a deck that haunts the nightmares of all ex-Night March players: Trevenant. Trevenant is a deck that has seen success almost nonstop since its inception in 2014. It’s been through many iterations from the Trevenant / Accelgor deck that won 2014 Worlds in Seniors, but settled down with the release of BREAKpoint to the standard Trevenant BREAK deck we know and love. The list below certainly is a blast from the past but holds up against the toughest TAG TEAM Pokemon-GX and Pokemon VMAXes in 2020: 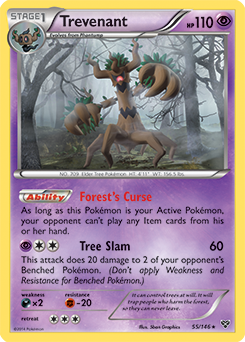 The goal of this deck is to get a turn 1 Trevenant, so going second is preferable in order to play a Supporter and use Phantump’s Ascension. In many cases, you can Item lock the opponent before they can play a Supporter, which further cripples their setup. While I expect that the 4-4-3 line of Trevenant is understood, the two copies of Tapu Lele-GX might seem out of place. Why not Dedenne-GX or Crobat V? The answer is “Occam’s Razor”, meaning the other options aren’t as good. Tapu Lele-GX is versatile as it can be an out to a Professor Juniper or be a Team Flare Grunt. While Dedenne-GX does allow you to play another Supporter after using its Dedechange Ability, Trevenant doesn’t need a ton of pieces to operate and discarding your entire hand to use Dedechange can be harmful. Crobat V’s Dark Asset Ability doesn’t use your Supporter for the turn either, but it rarely can be utilized for maximum power. There aren’t many ways to play your hand down to draw more cards with Dark Asset. To compound this point, both Dedenne-GX and Crobat V cannot be fetched with Mysterious Treasure and lack Tapu Lele-GX’s Energy Drive attack, which is extremely good and cannot be overlooked.

One Absol and One Tapu Lele

Sometimes the opponent pops off and powers up too many attackers to deal with. Here’s where Absol comes in. Provided there is a Crobat V or Dedenne-GX on the opponent’s Bench, using Counter Catcher and Ace Trainer along with Absol’s Dark Ambition Ability should stop the opponent dead in their tracks. Unless they draw a Guzma or a Mallow and Lana, there is no way to switch the Active Spot Pokemon to the Bench without retreating normally as Trevenant blocks Item cards from being played. Eventually, the opponent will attach Energy cards to the Active Spot Pokemon — now’s the time to start using Team Flare Grunt and Enhanced Hammer along with Trevenant BREAK’s Silent Fear to pressure your opponent. After a few turns, there will likely be enough damage in play to use Tapu Lele’s Magical Swap to take all six Prizes.

There is a strong argument to include Mimikyu CEC for its Shadow Box Ability. Shadow Box can further cripple the opponent, shutting off Abilities like Zeraora-GX’s Thunderclap Zone, Honchkrow-GX’s Ruler of the Night, and Mewtwo and Mew-GX’s Perfection. However, the main reason I would include it is for Naganadel and Guzzlord-GX’s Violent Appetite Ability. Save for Naganadel and Guzzlord-GX, Trevenant stomps Roxie / Garchomp and Giratina-GX. There isn’t enough Energy to survive the onslaught of Enhanced Hammer, Ace Trainer, and Counter Catcher plays. Yet, in combination with Exeggcute there are ‘infinite’ uses of Violent Appetite to render all of Trevenant’s attacks useless. While at this point one could bank on decking the opponent out, I’m not sold. Either way, this only applies if the Roxie / Garchomp and Giratina-GX player sees this line of play and it isn’t an immediate death sentence. Mimikyu is the 61st card if I could play it.

This deck’s Supporter lineup isn’t too farfetched, there’s consistency mixed with some techs. Three Professor Juniper is the sweet spot for Trevenant as discarding too many resources is a big worry. Two N and one Cynthia is perfect too. N is as disruptive as ever and allows you to make big comebacks late game. Cynthia is best used when your opponent has a dead hand but you don’t wish to Professor Juniper your hand away. Cynthia also allows you to win against any sort of deck out strategy since you shuffle your hand in but not the opponent’s. One Guzma is necessary for being able to trap Pokemon with Absol, one CARD NOT FOUND is needed for the Arceus and Dialga and Palkia-GX (ADP) / Zacian V matchup, and two copies of Team Flare Grunt do their job of picking away any Energy to attack or retreat.

Believe me, Super Rod is better than Ordinary Rod! While you can grab more cards with Ordinary Rod, you don’t know what you’ll end up discarding over the course of the game. In some games, it could be two Trevenant BREAK and a Tapu Lele-GX. In others, it can be all three Psychic Energy. Super Rod is more flexible and can recycle the maximum number of either Energy or Pokemon.

Another great addition to this deck is Horror P Energy. It can speed up KOs against Pokemon with low HP like Mad Party or Ultra Necrozma. Against other decks, it provides some extra juice for Tapu Lele’s Magical Swap. I’ve included a Mystery Energy to allow Trevenant to retreat for one Energy, which is nice when you need to attack with Tapu Lele-GX or Tapu Lele.

There are a ton of viable decks in Expanded, so I’ll try to give an overview for most of them:

The goal here is to prevent Pikachu and Zekrom-GX‘s Full Blitz attack, or stick something to the Active Spot. But this depends if the opponent plays Zeraora-GX. If they do, it’s extremely tough but if you can get enough attacks off and their Energy is spread out, you can use Tapu Lele’s Magical Swap to KO whatever Pokemon has Energy attached. If they don’t play Zeraora-GX, it should be a matter of using Counter Catcher a few times until they can’t retreat. Without Zeraora-GX: 70/30. With: 30/70.

This matchup is great since Coalossal VMAX‘s Eruption Shot doesn’t OHKO Trevenant BREAK. Thanks to their slower pace, Trevenant has some time to disrupt while picking off any Slugma and Magcargo. It’s easy to find kinks in the opponent’s board and exploit them via Enhanced Hammer or the Absol and Counter Catcher play. 85/15.