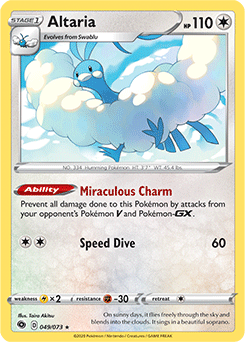 Hello PokeBeach readers, and welcome back to yet another article on the current Standard format! I have been covering the latest events in Pokemon pretty consistently lately, so feel free to check out my recent articles to read up on other important topics. If you have already read them, you probably know that I was planning on writing about Altaria this week, but plans have changed for a couple of reasons.

What caused this change was the information I gained from the Players Cup II, which ended up being much more interesting than I expected. For me, the biggest surprise of the Players Cup II was Tord Reklev’s Lightning Mewtwo and Mew-GX, which is an interesting combination that seems strong against the metagame. Not only did this give me a great deck to write about, but it also included a direct counter to Altaria in it, meaning that Altaria lost a ton of its value at this point in time.

Previously, Altaria seemed to be relatively disrespected overall, with relatively few players including a counter if their deck did not naturally have one. The Lightning Mewtwo and Mew-GX deck includes Greninja-GX, which gets through Altaria with ease, meaning that a deck I expect to gain large popularity would have no issues taking down our fluffy friend. On top of that, some of the other decks at the Players Cup II and other online events started to include Pokemon that can actually attack Altaria, so I think that now is not the time for that bird to fly. In further news, I will be going over the Mewtwo and Mew-GX deck that made a splash this weekend, along with covering some other happenings in Standard Pokemon at the moment, which should make for an exciting and valuable experience for you all. Without further ado, let’s take a look at the new way to play Mewtwo and Mew-GX.

While Tord Reklev and Pedro Torres gave the deck its debut during the most recent stage of the Players Cup II, other players have already started innovating the deck even further. Due to the deck’s versatile nature, this has proven to be a task with nearly endless options. The decklist below is only a couple of cards off from the original list because I believe they pretty much hit the nail on the head with this one.

When taking a look at the decklist, the nice array of options that the variety of attackers provide is what stands out to me. Outside of those, for the most part, the deck is simply a bunch of consistency and utility cards. It is weird to say the decklist is straightforward with how many different attackers are included, but it really is. It is built to do what it wants to do every single game, have options when it comes to its game plan, and wraps things up with some defensive Trainer cards. I have said this a lot recently, but it remains to be true, decks that can use Reset Stamp well are strong right now, and this is another deck that does that well.

Boltund V is the glue that holds this deck together, it is the missing piece that Mewtwo and Mew-GX needed before joining forces with all of the Lightning Pokemon. This is because it didn’t have a great way to accelerate Energy, as Welder was unreliable and less powerful than we have seen in the past. This is likely due to the Supporter rule, the increase in popularity of Chaotic Swell, and the lack of attacking options that the deck had. Boltund V, however, is a great and reliable way to accelerate Energy, setting you up to attack with some of the best attackers in the game. Past that, it is also a shield that protects your main attackers from being in harm’s way until they are ready to attack, and can set you up to Reset Stamp your opponent to one card if all goes well.

If it doesn’t get Knocked Out and sticks around, it can still act as a way of forcing your opponent to Knock Out an additional Pokemon since Bolt Storm can be used as a legitimate attack at some point during the game. This decklist includes two of these because of how important it is in the early game, not because it needs to use two in any given game (the second copy will almost never be used actually). Having two eliminates prizing concerns, as it reduces those odds from ten percent to one percent, which is nice for such an important card.

Additionally, having the extra copy gives you another great starter and makes it easier to find, which you want to do right away. Overall having two of these is a nice consistency boost, something that players love to get. 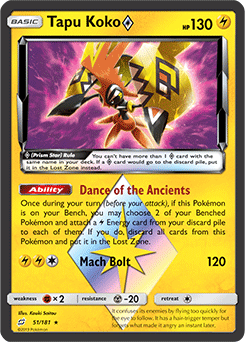 This is one of the main attackers this deck has to offer but is not the only attacker the deck makes use of. Pikachu and Zekrom-GX‘s Full Blitz is a great way to do damage and accelerate Energy, meaning it will often be the first attack you use for damage. Following up an Electrify from Boltund V, possibly even a Tapu Koko Prism Star pop as well, Full Blitz will load your board with Energy cards, giving you plenty of gas and options for the rest of the game. After that, the deck generally makes use of some of its other attacks, so Full Blitz loses a decent amount of value, though it is not completely useless since its damage output is still pretty good and Energy can still be searched for. Tag Bolt GX is the other attack Pikachu and Zekrom-GX has to offer, and it is incredibly strong in the right situation.

Every game is different with this deck, so keep an eye out for a good Tag Bolt GX opportunity, as it will happen sometimes but not nearly as much as some players might think before they play with the deck.

This threatening attacker is the final Lightning attacker that this deck has to offer, and man is it a strong one. A lot of decks fear this card due to how hard it can swing the game with it’s Tandem Shock attack. In combination with a Marnie or Reset Stamp, Tandem Shock puts a lot of pressure on the opponent, since they desperately need to find a switch card. If they don’t, they will fall behind substantially in the Prize trade. If they do, Raichu and Alolan Raichu-GX still forces them to burn resources to keep up, and future paralysis is likely to cause a repeat of the situation in the future.

This gives you many opportunities to swing the Prize trade in your favor, especially against decks that play little to no switching cards. Outside of that, Lightning Ride GX is a decent way to do a lot of damage while also providing your attacker with a little bit of protection. I have to say, though, that Lightning Ride GX is one of your lesser used GX attacks, as you tend to have stronger options. Over the course of enough games, though, Lightning Ride GX will see its share of use.