Hey all, taking a step away from some of the more popular new archetypes, today I bring word of Golisopod. I, of course, introduced this new single Prizer in my set review, citing its potential damage output with the format being almost completely dominated by Pokemon V and Pokemon-GX. Adversity Slash has the potential to be extremely powerful, it starts off at 30 damage and gets 50 damage greater for each Pokemon V and Pokemon-GX your opponent has in play! Eternatus VMAX, vying for the format’s best deck, is sure to have a field full of these kinds of Pokemon. You may not one-shot things, but you’ll be taking comfortable two-hit Knock Outs where you like. I’ve built this deck a few ways, a pure toolbox variant playing other single Prizers like Buzzwole, Spiritomb, and others; a version playing Roxie and Weezing to increase your damage output; and finally my favorite, a Welder version with Fire-type support.

How Golispod and Fire Go Together

Adversity Slash benefits from its two Colorless Energy typing, you can pair Golisopod with anything. Smash Turn could be a decent attack in its own right, but it’s severely under-powered in today’s game and would require another colored Energy, this time a Grass. The Fire support package gives you another way to charge Golisopod up in one go, Welder, and also complements your early turns where you may not have an immediate attack ready to go. 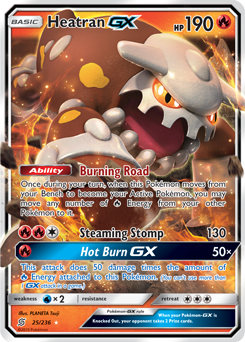 I identified three of my favorite techs to throw into this deck and have been playing them alongside Golisopod: Heatran-GX, Victini V, and Volcanion. Heatran-GX gives you another neutral way to one-shot things, as costly as that may be with its GX attack. If nothing else, Steaming Stomp is a decent damage burst that will assuredly set up two-hit Knock Outs. Victini V allows you to set up Heatran-GX for greater numbers and remains a solid attacker in its own right with Energy Burst, and Volcanion is another single Prizer that you can set up behind. High-Heat Blast is again another solid-smacking attack that can set things up. Fire stuff more than anything else gels with the Colorless typing of Adversity Slash, giving you a draw engine with Welder, a way to get Energy in Giant Hearth, and some recovery with Fire Crystal. You also benefit from Heat Factory Prism Star; the Energy acceleration more than anything gives this deck a fine way to power up additional Golisopod past the first few with Twin Energy. Now one could argue for Triple Acceleration Energy in this deck, a completely valid point, but that Special Energy doesn’t naturally allow for a sideshow of attackers. There will be awkward games or particular matchups where Golisopod is rendered obsolete in the face of other single Prize Pokemon decks or an inopportune board state. These games in particular will leave you requiring something more, something that can carry the torch in the meantime.

Along with the supporting cast, I’ve filled my list for this deck out with other consistency cards like a Jirachi engine and ample other Ability-based support Pokemon. Crobat V, Eldegoss V, and even Dedenne-GX currently have a home in my list, as does something a little special: Mawile-GX. It’s probably been a little while since Mawile-GX was on your radar, it’s last seen play in Arceus and Dialga and Palkia-GX decks, archetypes that were searching to get a quick win after using Altered Creation GX. Golisopod isn’t going to be such an aggro concept, it certainly won’t blow your socks off, but Mawile-GX can ramp up its damage output by putting Basic Pokemon V and Pokemon-GX onto your opponent’s Bench. Super Scoop Up has even slipped into my build, giving you a fifty-fifty shot of reusing Mawile-GX or one of your support Pokemon.