Hey everyone! Although we are now well into the era of Pokemon VMAX, today I want to focus on a good old low-HP, single-Prize-attacker deck: Falinks. Remember those Passimian decks from a couple seasons back? Falinks plays similarly, but with the tools available to it in the current format, I believe it has a chance to be even better than Passimian was.

The main difference between Falinks and Passimian is the existence of Falinks V. It counts as a “Falinks” for the purposes of Falinks’s Team Attack attack, so with a Bench of five in combination of Falinks and Falinks V, you can do as much as 150 damage before any other modifiers. The other important aspect of Falinks V is its Ability: Iron Defense Formation. This makes it harder for some attacks to Knock Out even the feeble 90 HP Falinks. The concept has the potential to be an aggressive single-Prize archetype, something I’ve sorely missed for a while. There have been single-Prize decks in recent years, but not one like this that can pop off and operate at full efficiency on the first turn of the game. A single-Prize deck that can ramp up to big numbers quickly has a place in the metagame, even if it’s not the BDIF. 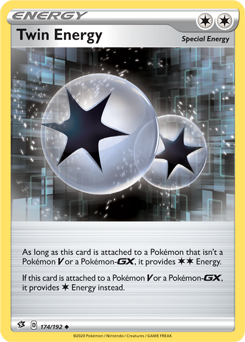 One other single-Prize deck that has seen some hype with the release of Twin Energy is Lost March. The trade-off between Lost March and Falinks is that the former can do more damage while the latter is faster and more consistent to set up (since it does not involve Evolution). In this article, I’ll be profiling both of these decks, as I think single-Prize decks are worth examining in any format because they will always be a threat to decks that do not trade favorably with them—namely, decks that revolve around Pokemon-GX or Pokemon V. The release of Twin Energy has been a valuable change to make these types of decks viable once again.

An aside on Twin Energy: it is far more “fair” than its predecessor, Double Colorless Energy, and I think it strikes the right balance between allowing fast, consistent single-Prize decks to flourish while not lending undue strength to two-Prize or three-Prize archetypes. My hope is that Twin Energy, in combination with more diverse single-Prize attackers in future sets, will help lead to a diverse metagame for the rest of this season and into 2021.

Anyway, let’s kick things off with my Lost March list!