Have you ever explained to someone–a family member, perhaps, or some other acquaintance that only vaguely knows of Pokémon–that you play the Pokémon TCG, only to be met with the question “so, what’s the best card?” It’s something that I’ve had to answer a few times, especially after I became a sort of ambassador for the TCG in France. The most honest answer to give is that being good at the Pokémon TCG isn’t about having better cards than other people. At the top level, players all have access to the same pool of cards, in Standard at least (let’s not get into the Tropical Beach situation in Expanded for now). Cards are not really good in isolation; what’s important is the synergy between them.
That’s all good and nice, but sometimes, people are not satisfied by this answer and what to know what’s the best card. For example, because they know about some Pokémon and wonder if the ones they remember (such as Pikachu, Mewtwo, and Charizard) are the best ones in the game. In this case, my answer used to be Zoroark-GX.

For all its naivety, the “what’s the best card” question is not totally without merit, especially for someone like me who likes to think about the theory behind the game. Right now, I don’t know what the best card is in Standard. Arceus and Dialga and Palkia-GX is a possible candidate. In my opinion, I can’t think of any attack that changes the game as much as Altered Creation GX does. Zacian V is another fantastic card in Standard because of its attack power and its Ability which makes it useful in a wide range of decks.
Some may think of Pikachu and Zekrom-GX as well. However, even though the card is definitely very good, the reason why it’s a tier 1 deck is not because of Pikachu and Zekrom-GX itself but rather the whole menagerie of support Pokémon around it. For example, Tapu Koko Prism Star, Zeraora-GX, Boltund V, and the Lightning-type Item cards like Thunder Mountain Prism Star and Electropower.
Of course, you could also make a strong argument that the best card in the format is Quick Ball. Even though it’s hard to compare an Item card to a Pokémon, Quick Ball is everywhere and some decks wouldn’t be half as good without it. 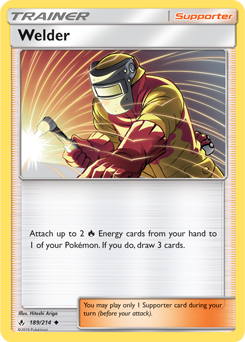 While I don’t have a definitive answer to the question “what’s the best card?” now, things were different at the beginning of the season (simpler times when you could leave your home to go to your local league and play Pokémon tournaments in real life). If you asked me that question eight months ago, I would have answered, with no hesitation: Welder.
Welder was the best Energy acceleration in the format (sorry, Malamar) and was a more than adequate draw effect. It powered up a huge number of powerful decks. Heatran-GX / Jirachi, Reshiram and Charizard-GX / Green's Exploration, Mewtwo and Mew-GX, Blacephalon-GX / Naganadel, Blacephalon / Green’s Exploration, and Blacephalon / Pidgeotto are all decks that depend on Welder for their very existence (except arguably Blacephalon-GX / Naganadel, but it would have been way worse without Welder). In fact, the Top 4 of last year’s World Championships was four different Welder decks, one of which played no other Supporter than Welder. In the (almost) ten years I’ve been playing the game, I don’t recall any other situation where there was a Supporter that was so good that decks would play four copies of it and nothing else. Without Welder, the early season metagame would have been so different that it’s hard to imagine it, and that’s why it was, in my opinion, the undisputed best card around.

Welder’s glory has waned since then, due to many strong cards being introduced (like the aforementioned Arceus Dialga and Palkia-GX and Zacian V). Remove Welder from the game now and the metagame changes, but not drastically. While a Top 8 of a major event without any Welder would have been unthinkable months ago, now it’s very reasonable to imagine.
That said, no one is surprised either when Welder does perform at the top level. Blacephalon is a top tier archetype, Reshriam and Charizard-GX / Jirachi comes back once in a while (usually when people don’t expect it) with explosive results, and other decks like Mewtwo and Mew-GX / Welder are still around.

This is why, today, we’ll be looking at Welder decks, in honor of the former best card in the format. I’ll analyze and give decklists for three Welder decks: Blacephalon, Fire Toolbox (Heatran-GX / Jirachi), and Reshiram and Charizard-GX / Green’s Exploration. Remember that these are not the only decks around: I talked about Mewtwo and Mew-GX in my previous article, and there are other concepts around such as Magcargo-GX.

By its nature, Blacephalon always has OHKO potential, no matter how high the HP of Pokémon VMAX gets. This is why it’s still a tier 1 deck, and why it will be competitive until either the metagame shifts away from huge two- and three-Prize Pokémon, or Blacephalon loses the cards it needs to function to rotation. The latter option is very likely to happen before the former!

If you’re playing Blacephalon in a best-of-one situation (including online), this is a safe list to use. It includes all the consistency Pokémon one can need: Oricorio-GX, Zacian V, Dedenne-GX and Cramorant V (for Beak Catch).