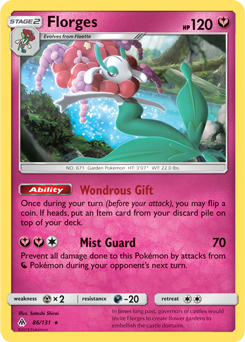 As I’m beginning this article, I realize that I write a lot about decks revolving around Lillie's Poké Doll. At the Collinsville Regional Championships this past weekend, ‘Doll Stall’ variants were more popular than ever. I was one of two people who opted to play the Florges version as opposed to the more prevalent Wall Stall or Oranguru versions. This worked out well enough for me, as I was able to place within the Top 16.

I will say now that the current Expanded format is the most degenerate format that I’ve ever played in–there are too many decks and strategies that are based around preventing the opponent from playing the game. While this is acceptable in small doses, the overwhelming popularity of decks based around the likes of Trevenant and Dusknoir-GX, Vileplume, and Lillie’s Poke Doll is currently at an all-time high. I hope that the Expanded format receives some more bans or even a rotation to make the format more playable, but I also hope this doesn’t happen immediately so that this article stays relevant for you, the readers!

I tested exactly zero games of Florges / Lillie’s Poke Doll before the tournament, however, I did play some opening hands on Friday night to make sure that the deck was consistent, and I felt like my list was strong. Nathan Brower was the only other person who played the deck and as he came up with his list independently from me, our lists turned out quite different. He was also able to make Day 2 but was less fortunate than I in terms of matchups.

I thought Florges was a strong pick for the event because of its overwhelmingly positive matchups. Against any normal attacking deck, Florges cannot lose. I was only expecting to take unfavorable matchups against Vileplume and Trevenant, which I thought was fine because that’s only two decks, and they’re not even that big. I correctly predicted lots of Zacian V, Ultra Necrozma, Snorlax VMAX, and Turbo Dark, all of which are basically auto-wins for my deck. I was expecting less Trevenant and Dusknoir-GX than the amount that actually showed up, but I thought the matchup was fine anyway. What was a complete surprise to me was the number of other Stall decks. To adjust for the new metagame presented by Collinsville, I will make a few changes to Florges but I think the deck remains incredibly strong.

Here’s the list I used to get 14th place at Collinsville Regionals: