Hello PokeBeach readers! To recap from my last article, found here, I discussed Single-Prize Attacking Decks (or SPADs for short) and their placement on the meta. With the results from both Collinsville and Dallas Regionals, I think it is safe to say there’s a ton of diversity in Expanded right now. Normally, I’m a huge fan of a splattering of decks, meaning that I get to have fun no matter what opponent I sit across. Nowadays, on the ladder of PTCGO and in personal testing, it seems as if playing a game of Pokemon is just going through the motions of proper sequencing for both decks until one comes out the winner. Furthering my point, seven of the Top 8 decks at Collinsville were either a mill / stall variant, or an Item / hand lock variant. Ideally, we’ll get a fix soon, perhaps banning Milotic or another lock combo.

Keeping said degeneracy in mind when building a deck is important. For today, I have two decks that I would like to share that I have tested religiously and that I have tweaked to take into account the expected increase of Trevenant and Dusknoir-GX and/or Rowlet and Alolan Exeggutor-GX: Ultra Necrozma and Darkrai-GX. These two decks are attacking decks (my favorite kind) that are able to break out of locks as well as steamroll through powerful decks like Arceus and Dialga and Palkia-GX / Zacian V or Snorlax VMAX. 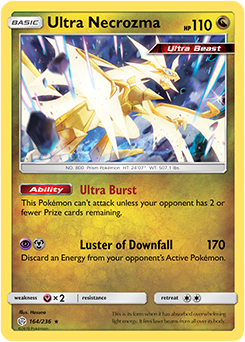 I’d like to discuss Ultra Necrozma first. Since the conception of the card in Cosmic Eclipse, a single Prize attacker that does 170 base damage has sounded extremely good. In practice, it is still very good, albeit not as starry-eyed as one would expect. I believe the main reason for the deck’s middle of the road success at Collinsville was due to the rise of Trevenant and Dusknoir-GX and CARD NOT FOUND Stall. There were a total of eight Day 2 Ultra Necrozma decks, fairing from Top 16 down to Top 64, but no “top” players chose to pilot the deck. With a prepared list, one can take down Trevenant and Dusknoir-GX, and I’m still working on the stall matchup.

The good news though, is the deck as a whole is extremely simple to play, requiring only proper management of resources, prize mapping, and basic sequencing.