After the LAIC, we now have a clear idea of how Cosmic Eclipse has affected our Standard format. This set hasn’t completely changed things around—but it’s been far from a dudl! A brief look at the IC results shows how impactful all of these new cards have been. Arceus and Dialga and Palkia-GX has quickly become the most popular deck in Standard. Florges Stall proved itself with a Top 8 IC finish. Naganadel and Guzzlord-GX, Charizard and Braixen-GX, Silvally-GX, Mega Lopunny and Jigglypuff-GX, and Blastoise and Piplup-GX all found their way into Day 2. On top of that, the new Trainer cards from Cosmic Eclipse made a tremendous impact, and found their way into nearly every deck that was played. Many of the decks might seem similar, but Cosmic Eclipse has definitely left its mark!

Once again, the Standard meta was flush with deck diversity. There were 13 different decks that made Day 2 at the LAIC, and that’s without accounting for any differences within archetypes (such as Green's Exploration‘s vs Ability variants). As for the pre-Cosmic Eclipse archetypes, pretty much none of them fell out of the meta. 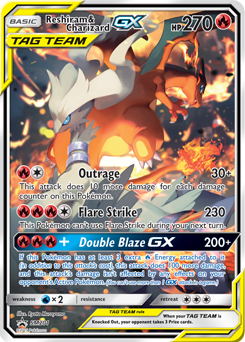 Reshiram and Charizard-GX and Mewtwo and Mew-GX Box, once again, won the day, while Pikachu and Zekrom-GX, Blacephalon (baby and GX), Pidgeotto, Gardevoir and Sylveon-GX, and Malamar all stuck around. In a way, the meta was quite similar to that of the Knoxville Regional Championships, but with more decks thrown in. In almost every case, the variants of these decks included plenty of new stuff from Cosmic Eclipse. With the exception of Green’s Exploration decks, most replaced Custom Catcher with Great Catcher, as it provides the same effect in most scenarios, but with a lower cost, and in a way that takes up fewer spots in the decklist. Tag Call found a home in Tag Team Pokemon-GX decks, by providing them with even more consistency. This was not only because it could find useful Pokemon, but also, thanks to the effectiveness of the new Tag Team Supporter cards. Of those, Mallow and Lana was probably the most popular. Thanks to Mallow and Lana, for the first time since the rotation we have a consistent, versatile healing card, which has an added bonus as an emergency Switch—quite useful against stuff like Raichu and Alolan Raichu-GX’s Tandem Shock. Cynthia and Caitlin was also a popular card, especially in decks that either played a wide variety of Supporters, or made heavy use of a specific one (think Welder or Green’s Exploration). Guzma and Hala saw some niche play in decks which could utilize two or more of its search functions, and Bellelba and Brycen-Man and Misty and Lorelei both saw play as important pieces in the strategies of some of the newer decks.

As far as decks revolving around the new Pokemon, the most successful were the two that make up the title of this article: ADP and Florges Doll Stall. Arceus and Dialga and Palkia-GX, aka ADP, is a good old-fashioned hard-hitting versatile attacking deck, whereas Florges is our newest noxious Stall variant – you might not be taking any Prizes, but they won’t be either! Both of those decks were able to make the Top 8 – a clear indication of their capability and potential. On top of that, there are a number of other, less talked-about decks, which are still certainly worth taking note of. Naganadel and Guzzlord-GX, Charizard and Braixen-GX, Reshiram and Zekrom-GX, Raichu / Pachirisu, Roxie / Weezing, and Blastoise and Piplup-GX are all neat new decks that recently made their debut, and that I wouldn’t be too surprised to run into in future matchups.

Of those new Cosmic Eclipse decks, the four I would be most worried about facing at Daytona Beach Regionals are ADP, Florges, Naganadel and Guzzlord-GX, and Charizard and Braixen-GX, in that order. All four of these decks saw at least a decent amount of play in Sao Paulo, and had Day Two success as well. Now that proven decklists are publicly available for these new concepts, I would expect the meta share of those decks to increase. These may not be the only four decks from Cosmic Eclipse, but I do think that they will be the most popular, and hence the most important to focus on. Here’s how to approach these new matchups: