I made Day 2 in Oregon at the Portland Regionals with a new control deck, well, revamped I suppose. Pidgeotto proved itself to be just as strong in Expanded, if not stronger than in Standard! Pidgeotto looks to be a huge threat moving forward with the release of Cosmic Eclipse, although there are plenty of reasons why it might flop. Today it is my goal to cover those counters and peruse over some of the most interesting decks in the metagame. First, though, a brief overview of this latest Expanded Regionals and a peek at what’s to come post-ban. 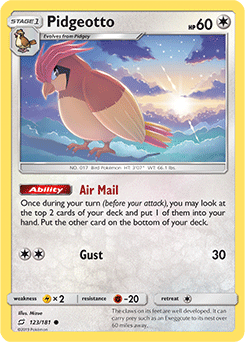 I expected a lot of Greninja and Zoroark-GX and was correct in that assumption. It was the most-played deck throughout the entire tournament and I personally played a couple. Here’s how my games went:

I struggled against Gardevoir and Sylveon-GX; I played the same player both days and he was able to secure a win both times. He had a great gameplan and played well, in which case I believe the matchup to be unfavorable. That effectively ended any hope I had for a solid placement and I ended up 35th overall. Still happy that the Pidgeotto Control deck performed so well and it was nice to see associates Daniel Altavilla and Michael Pramawat finish strong with the list. The Pidgeotto deck ended up being better than Zoroark-GX, it played around Power Plant and allowed you to achieve a setup beautiful through Winona and Professor Elm's Lecture. The deck wanted to avoid Pokemon-GX to draw out the game and get better opprotunities to lock an opponent’s hand so focusing on a non-GX was incredible. We finally tried the deck out on Thursday after putting it off and dismissing it in favor of Zoroark-GX Control decks. It worked well, was super consistent, but had a problem with both Weavile-GX and Oranguru in the same Greninja and Zoroark-GX list. That’s where Mimikyu-GX was brought in. That card gave you the opprotunity to drop Silent Lab, put up a Pokemon that couldn’t retreat, hand lock your opponent with Mars, then use Dream Fear GX to put the Weavile-GX back into the deck. Yes, you have to hope your opponent doesn’t draw a good card for their turn, but it’s a risk you need to take. This list was well-developed and operated consistently. Moving forward, it is very likely to be dead because of the Expanded format ban list. Without Reset Stamp and Lt. Surge's Strategy, it will be hard for hand lock decks to operate effectively and they will likely get run over. Losing Chip-Chip Ice Axe also hurts, although Trick Shovel and Hiker do still exist.