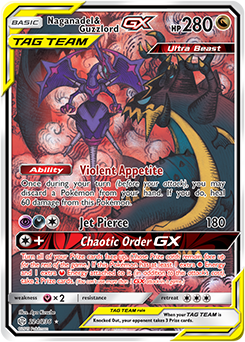 I went 2/4/0, horrible. I put my two year streak of making Top Eight at the event with Naganadel and Guzzlord-GX, a deck I felt confident in. The deck had, and still, has a major flaw: a loss to Gardevoir and Sylveon-GX. I played against four and lost all four! I find this stroke of luck to be insanity, to be completely honest, but it was hard to avoid after losing the first round and spiralling into a “bracket” of decks that would be more forgiving to a deck such as Gardevoir and Sylveon-GX. I don’t consider that deck great and I am almost always fine taking a loss to it at events. It does not perform well in Day 2 of most events and it’s also not very popular if you can escape the first few rounds. I hate excusing tournament results but this one takes the cake, I feel I have a valid excuse and I’m sticking to it. My testing mates, Igor Costa and Jimmy Pendarvis, both made day two with the deck, but the rest of our squad did not fair as well.

Do these results make the deck bad? This was a rogue deck of sorts and perhaps it was not as great as we all thought. I do think it was a solid choice and don’t regret playing it. You have a great spread against everything but non-GX decks like Blacephalon / Pidgeotto, the “Doll Stall” (Florges / Lillie's Poké Doll Control) deck, and Gardevoir and Sylveon-GX. Admittedly, we underestimated the popularity of Gardevoir and Sylveon-GX, giving it only a four on our “ten-point scale” of popularity. Naganadel and Guzzlord-GX would certainly have slid a bit on our spreadsheet predictor had we rated its nemesis higher. Anyway, let’s look at what did well and what was played to begin with: