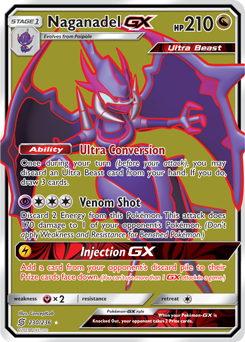 On the morning of the finals of the Worlds Championship this year, I joked that Naganadel-GX had to be the best card in the format, since it was in both of the finalists’ decks. Of course, both players used it for very different reasons. In Henry Brand’s deck, Naganadel-GX provided Mewtwo and Mew-GX with the Venom Shot attack, to snipe damaged Tag Teams or Dedenne-GX on the Bench. In Shintaro Ito’s deck, Naganadel-GX was a draw engine more than anything, capitalizing on the high number of Ultra Beasts in his deck to provide him with more cards thanks to its Ultra Conversion Ability. He also included a Psychic Energy to have the Venom Shot option, though. In addition, Naganadel-GX was also the centerpiece of Xander Pero’s Open-winning deck, proving its incredible versatility. Whether it’s because many Ultra Beasts are among the best cards in the format right now, or because an attacker that doubles as a draw engine is a fundamentally powerful combination (the real answer is both), Naganadel-GX has a lot of potential and I’m sure it will keep seeing play in various decks throughout the season.

One of the designers’ favorite Pokémon must be Naganadel, because there’s another recent card that offers the same kind of versatility: the non-GX Naganadel itself! For example, in a game I played recently on TCGO, I opened with two Poipole and my opponent, going first, searched for Tapu Fini as his first action of the game. The joke was on him, though: I wasn’t playing Blacephalon-GX, but Quagsire. Tapu Fini is not terrible in that matchup, but it’s not the win condition he hoped for. And there are even more decks that can make use of Naganadel!

Let’s delve a little into theory: Why is Naganadel strong? One of my main issues with the current Standard format, which I keep mentioning in every other article, and also one I share with many other players, is how it appeals to Basic Pokémon, and especially big, multiple-Prize Basic Pokémon⁠—Tag Teams above all. Although Pikachu and Zekrom-GX, Gardevoir and Sylveon-GX and Reshiram and Charizard-GX all play fairly differently; what they have in common that their basic gist is to put a bunch of Basic Energy on big HP Pokémon, whether that’s thanks to Tapu Koko Prism Star (and then Full Blitz), Fairy Song, or Welder. Other strategies, such as using a draw engine in order to access your techs, locking some aspect of your opponent’s play (such as Items or Abilities), or even using a variety of weaker but more situational attacks from one-Prize attackers, are all either absent or weak. And these are all strategies that we’ve seen fairly recently in Standard (and that are viable in Expanded)!
When the best decks all count on the fact that you want a bunch of Basic Energy in play, then it makes sense that Naganadel, a Pokémon that excels at getting Energy into play, would be effective.

Therefore, in order to try something a little bit different in this article, I’d like to talk about three different decks, all of which use Naganadel as a central point in their strategy. Two of these decks are meta decks, and one is rogue. In each case, I’ll talk about how I would play the deck. Also, when you’re building a deck using Naganadel, it is tempting to include Naganadel-GX (and even the older Naganadel-GX from Forbidden Light) in the deck, so we’ll also think about whether they can fit or not!