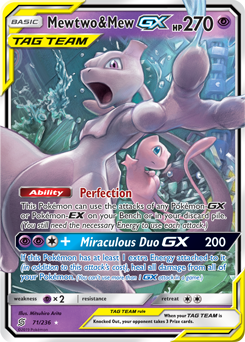 I certainly didn’t win the World Championships with Mewtwo and Mew-GX, I didn’t even play the deck myself! However, I’ve been playing a ton of it since and a little before the event, so I have a very informed opinion on how to play it and thoughts on the cards in the deck. This is not your traditional toolbox deck; frankly, there hasn’t been a deck like this in recent memory. The array of options you have every game is absurd and each one has a purpose when the deck is built correctly. Truthfully, pre-Worlds I was playing a Rainbow Energy-based deck without the wondrous Magcargo-GX and a few of the other important attackers. I instead opted for Dragonite-GX and a more teched out build with the versatility of Rainbow Energy. Rainbow Energy has more utility, but it comes with great cost. Not only does the 10 damage inflicted upon yourself often matter in damage calculations for your opponent, but it isn’t able to be accelerated back with Solgaleo-GX using Turbo Strike. Solgaleo-GX makes the deck for me – it might be the most important card in the list. I’ve changed only a few cards from the main list that’s been circulating around since the aftermath of Worlds. I’m sure you’ve seen it already, but here is Henry Brand’s amazing first place Worlds list:

My original list excluded some important cards like Espeon and Deoxys-GX as well as Magcargo-GX. I played an Altaria-GX which is simply underwhelming when you add in more attacking options that create new win conditions like Cross Division GX. I also excluded Cobalion-GX, Iron Rule GX is just a better Altaria-GX, giving you “another turn” to create a win condition in tense situations with no room for error. I also ran Coach Trainer originally, but I firmly believe now that increasing your chances of getting Welder off as soon as possible is better. Acro Bike needs to be played for this reason, giving you more outs to Welder than just Welder and Pokégear 3.0 themselves. Playing Electromagnetic Radar is a nice touch as another way to get Dedenne-GX and and discard attackers. Aside from these mentions, most was the same.

Starting with your main attacker is extremely nice. This list has thirteen Basic Pokemon and thus a 47.72% chance of starting with a Mewtwo and Mew-GX. Starting with Latios-GX isn’t bad at all either, as it has free retreat. If you count that in the equation, that moves things up to 56.69%. You do, however, only use two Mewtwo and Mew-GX per game in most instances. Sometimes you’ll use three, perhaps retreating from one to another to avoid a Knock Out. As such, playing three copies would be sufficient, keeping your percent chance of starting with an ideal Pokemon about the same. In my own list, which I’ll get to soon, I have taken one out for a special tech card.

Playing four wouldn’t even be bad, three is extremely good to keep digging when Welder is your main draw card. Not only that, but as a bonus it can get some of your evolution attackers into the discard pile and keeping your turns going is amazing. I would genuinely consider running four as starting with one is annoying as is landing one in your Prizes; it’s that important to the deck. Regardless, this is a fine number and absolutely necessary for this deck’s function. 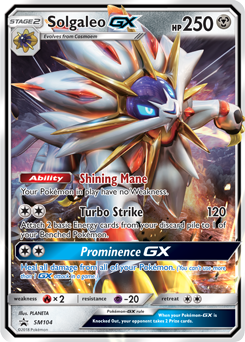 Turbo Strike is a broken attack and sets up your attackers to use things that discard Energy. Solgaleo-GX makes the cut for this reason and playing two isn’t out of the question so you don’t Prize it and have to manually get Energy into play. I like to think in games where I have to discard a lot of Energy early that “this is going to be a Solgaleo-GX game”, shifting me into the mindset where I need to find a turn to use Turbo Strike to get some of the Energy back that I’ve had to part with. Reshiram and Charizard-GX might feel underwhelming sometimes, but Outrage is very good for only two Energy and Flare Strike is an amazing fallback attack. You don’t use this guy to attack that much, but you’ll be thankful for the vanilla damage output when you want it. Not only that, but Double Blaze GX can be nice for a one-hit Knock Out on occasion when you don’t want to discard all your Energy like with Magcargo-GX.

Naganadel-GX is only in the deck for Venom Shot, an incredible snipe attack that bodies decks like Malamar and reaches threats on your opponent’s Bench without you needing a pair of Custom Catcher; its inclusion needs no more justification. Magcargo-GX I’ve already raved about, it’s a better Dragonite-GX, leaving you with the option to use less Energy to take a one-hit Knock Out in certain situations and coming with the bonus of Burning Magma GX if you ever happen to catch your opponent offguard with five or less cards in their deck for a mill win condition. These are the main attackers of the deck, the ones you will use most games.

Resetting Hole is a searchable out to Power Plant and while Power Plant has significantly decreased in popularity, it’s still a threat to this deck and one that you want to have your bases covered against. Latios-GX is great for Tag Purge in certain situations where you’re facing a single TAG TEAM threat, like occasionally in the Reshiram and Charizard-GX matchup. Clear Vision GX is great in Fire matchups as well as against Pikachu and Zekrom-GX to stop Tag Bolt GX from ever going live. It’s a versatile card and in the worst case scenario it’s a free retreat pivot to throw on your Bench to make your life easier after a Knock Out. Jirachi-GX is amazing insurance against Malamar decks and against the occasional Mewtwo and Mew-GX tech in Pikachu and Zekrom-GX as well as Reshiram and Charizard-GX. Against Malamar you always want to have it down and against the TAG TEAM matchups you only need to drop it when you could see a Psychic type revenge Knock Out coming from a Mewtwo and Mew-GX transition with Energy Switch or Tag Switch.

Espeon and Deoxys-GX is a great finisher of Knock Outs with Cross Division GX and a way to get ahead on Prizes in matchups with more squishy targets like a deck playing Pidgeotto, for instance. Ironically, we didn’t expect Espeon and Deoxys-GX to be played in this deck so when we rolled up with Pidgeotto Control at Worlds we were instantly scared of facing this matchup because Cross Division GX was very hard to deal with in this build. Cobalion-GX is just for Iron Rule GX, giving you an out to bad scenarios. It’s really just that, a flexible card that gives you “another turn” to build a win condition or avoid a play that seems inevitable from an opponent. I find myself using it a lot in Reshiram and Charizard-GX matches where my opponent might have a turn to use a non-GX to attack and I don’t have a great response. This deck uses the power of mapping your Prizes to its full potential and making sure you don’t waste time taking non-GX Knock Outs in a lot of situations is ideal. Using Iron Rule GX to effectively give yourself another turn gives you the chance to find more pieces to a double Custom Catcher play and continue your hunt for multiple Prize-bearing Knock Outs.

If you could use Welder every turn, especially on turn one, you would. That’s why there just needs to be four! Playing Supporters other than Welder might not make the most sense, but it does when you have turns where you already have all the Energy you could possibly want in play and just want more attacking options or a double Custom Catcher play. That’s where Bill's Analysis comes in, it’s great to reach deep into your deck, especially when it’s already thin, and find missing pairs of Custom Catchers and the like. I enjoy it as a secondary Supporter to Welder, but I’m also intriguied by some other options or its removal altogether in favor of something like Pal Pad for “more” Welder copies. As it currently stands, this is a solid lineup for Supporters in a deck that’s already super self-sufficient without playing one each turn due to the likes of Dedenne-GX and Acro Bike.

Fire Crystal is your only way to get Energy back other than with Turbo Strike. I like it, but it’s better as an Energy Recycle System, one of the changes I’ve personally made. Eight Fire Energy is just enough to “guarantee” you use Welder for its full effect at least three times, just about as many times as you’ll need to in order to win the game. Three Psychic Energy is also enough because not all of your attacks use Psychic Energy and the ones that do just take one in most cases. Miraculous Duo GX is an underrated GX attack and to use it you do need two Psychic Energy, that’s the only use I’ve really ever gotten where I needed two Psychic Energy on the same Pokemon. Three has worked just fine and you can always Turbo Strike one back on if needed.

Giant Hearth plus a Welder is awesome, so that’s why it’s favored. It’s far more important to find Fire Energy in the early game and Giant Hearth also helps you thin the deck. These Stadium cards work in two ways, for their effect and as a way to counter Power Plant and other Stadiums, making them far better than the likes of Energy Spinner or Fiery Flint. Giant Hearth also discards a card in order to use it, which you almost never mind because it’s just another way to get attackers that you want into the discard pile! Viridian Forest is a nice option to pull Psychic Energy from your deck on occasion. It’s kind of a “why not” concept, you’re not going to have any specific ways to find Viridian Forest itself from the deck but it will happen eventually. This deck draws so many cards and thins down very well that you’re never really struggling to find the things you want. Bill’s Analysis makes things even easier and it’s a way to get the aforementioned Stadium, too.