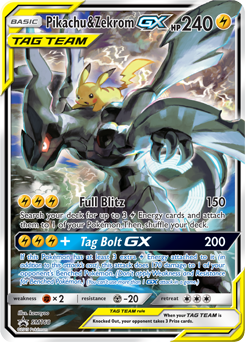 Hello! By the time this article is published, if you’re in Washington, D.C. this weekend for Worlds or the Open, you’ll probably have your deck chosen and built already. However, if you’re still looking for last-minute advice, this is the article for you! I’m not going to introduce new concepts here, that you wouldn’t have time to practice with anyway. Instead, I want to give you updated, simple lists and some tips that you can apply even a few hours before the event.

It’s no secret that Pikachu and Zekrom-GX is considered one of the strongest, if not the outright best deck in the format. I’ve written about it in the past and I still think that lists based on Jirachi are very strong. However, if you’re about to pick up Pikachu & Zekrom-GX just before the event, you might want a simpler approach to the deck. (Simpler doesn’t mean worse!) Here’s a very aggressive list that my testing group built this week.

As you can see, this list prioritizes aggression. Here are some notable choices and why they fit into this approach to the game. This list can be considered “highroll”: that is, it is potentially extremely strong, if you’re a bit lucky. However, it is also more susceptible to variance and can also be disappointing. As I’ve discussed last week, this kind of deck can be worth playing at the World Championships, where the high level of your opponents and the low number of rounds played mean that you’ll need some part of luck anyway to succeed. For example, this deck can achieve turn 1 Full Blitz (going second) better than any other PikaRom list I’ve seen. That said, there also games where it completely blows up on itself.

Pikachu & Zekrom-GX is the ideal starter, so we play three copies of it to maximise the odds. Also, it’s not uncommon to follow Full Blitz with Tag Bolt GX, so Pikachu & Zekrom-GX is definitely the main attacker in the deck. In comparison, we use Raichu and Alolan Raichu-GX less, so we only play one copy.

Speaking of drawing into it, this deck maxes out on draw Supporters in order to get more cards. As good as Volkner is, getting more cards gives you better odds to get everything you need… but also deprives you of the option of getting exactly what you need at the right time. Once again, this fits with the high risk, high reward mentality. Acro Bike is much the same.

The strange thing here is not the inclusion of Custom Catcher but the fact that, without Volkner or Jirachi, there’s no way to search for them. Still, Custom Catcher can be used in this deck because it’s easy to thin the deck thanks to cards like Cherish Ball, Acro Bike and Electromagnetic Radar. As long as you don’t discard Custom Catcher, your deck gets thinner, which means the Custom Catcher density increases. Then, you can use Cynthia or Lillie to draw into the precious Items. This may seem random, but there are precedents for it. Pedro Eugenio Torres got Top 4 at last year’s Worlds with a Rayquaza-GX list that included four Puzzle of Time. Similarly to Custom Catcher today, there was no way to draw specifically into Puzzle of Time, but he still managed to regularly get two of them in his hand at the same time for this reason.