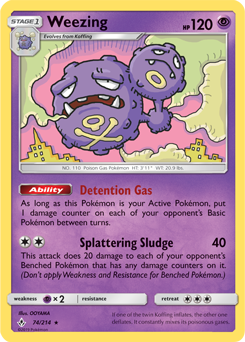 It’s true, my testing group and I (minus Daniel Altavilla) played Weezing for the Origins Special Championship about a week ago. None of us had anything to “lose” per se in the event, so we wanted to play something fun and unique. Based on some of the other Origins side events from days prior, there was a rise in popularity of decks like Blacephalon, Malamar, Pikachu and Zekrom-GX, and Zapdos variants. This taken into account, Weezing seemed like a great play with little Zoroark-GX around and less people playing Reshiram and Charizard-GX (some lists of which may not even be playing Miltank). So the Weezing deck ticked both of the boxes we wanted to fill and I went in with it. Altavilla was dead set on Zapdos from the start, so there was no convincing him — it worked out for him too, he won the whole thing, so props to him for that.

These, chronologically followed by Weezing, clash quite a bit against the type of deck Weezing represents. Most, if not all of these decks, have different paths to victory. Weezing is a unique case, a deck devoid of much creative thought, a deck that aims to set up and attack with the same attack for almost the entirety of the game. With some tech attackers, the deck can occasionally switch it up and try something different like a surprise Frost Rotom or Larvitar, but aside from that you will be using Splattering Sludge the whole game.

I did not like Weezing as a deck. It was very linear, far more linear feeling than any deck I’d used all season. I felt it didn’t give me much of an opportunity to win some games against clever opponents that could outplay the deck’s strategy to spread until a game-winning play was possible with Tapu Lele or just multiple Knock Outs at once. The deck was powerful in the games I successfully executed the strategy and my opponent lacked a counter, for that I will laud it. Its Zapdos matchup is impeccable and should be one of the strongest draws to the deck. My greatest dislike of the deck is its matchup with Reshiram and Charizard-GX, a format-defining deck. Miltank can Moomoo Malt on repeat until most of your damage is completely removed and Eevee and Snorlax-GX becomes nearly unbeatable. While Larvitar can play some trickery to counteract it, it’s hard to pull off and some of the damage combinations you’ll need which I’ll talk about later in the matchups section. The point I want to make here is that against players that are prepared for or well-practiced against Weezing will be extremely difficult to defeat, nearly impossible in fact.

Weezing feels like a metagame call type of deck, not one that you play because it’s “the best deck” – it’s just not. It is a threat at events and a deck that you should figure into your own deck choice. It makes me wary to play Zapdos myself, and makes me consider playing a Mew in many decks and contributes to my desire to have a Miltank in Reshiram and Charizard-GX builds. Weezing is a simple deck to play, you really just need to study some of the damage combinations for Larvitar math and for Frost Rotom, both of which happen to be most important in the Reshiram and Charizard-GX matchup. I like it as a play for the North American International Championship for anyone that’s uncertain of what to use and has no time at all to test. It will take easy wins by default in many matchups and keep you mentally rested as much of your play is self-explanatory; just attack!

In order for this deck to execute its simple strategy a list needs to be built solely around consistency. As long as you’re attacking and setting up more Weezing you are good to go. One of the more subtle aspects of the deck is that you do want to have three Weezing or at least two and a Koffing (or the Ditto Prism Star) in play at all times so that you can always get the Detention Gas damage buff after one of your Pokemon is Knocked Out and you must send another up. To do this you must be consistent, there is little margin for error with every damage counter making a difference. Here’s the list we used for the Special Championship, a great list as-is for upcoming tournaments: