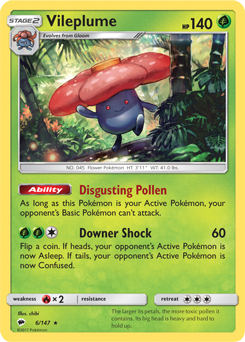 Hello everyone! This is Grant once again. In my last article I went over Vileplume and Shedinja. Following that, both decks were successful at Santa Clara Regionals, albeit with lists a little different from the ones I posted. In this article I am going to further review both of those decks. Additionally, I want to go over the two criminally underrated decks that I am likely to play for Madison — Zoroark-GX / Slowking and baby Blacephalon.

The post-Unbroken Bonds Standard meta is starting to form. Reshiram and Charizard-GX is the clear frontrunner and it’s not close. Arcanine is good in the deck and should be played in my opinion. Zapdos is popular and did well at California, but it isn’t good in my opinion due to poor matchups, among other reasons. Vileplume is considered by many to be top three in the format, and might stay that way. I have no idea how Vileplume is going to do in Madison, though I was not surprised to see it swarm Day Two in Santa Clara. Pikachu and Zekrom-GX, Weezing, Zoroark, Shedinja, and Quagsire are all strong contenders as well, although they aren’t quite as popular as the other three decks.

I went rather in-depth concerning Vileplume in my last article, so I’ll direct you there regarding most of the card choices, notably the Dragonite package. Here I just want to go over the changes from the previous list.

My previous list is strong and might still be better, but everyone at Santa Clara opted to incorporate a Metal package into Vileplume. While I don’t think a full offensive Lucario and Melmetal-GX with basic Metal Energy is necessary, I do like the Metal package. The main downside is that it’s weak to Field Blower, forcing us to run a lot of Metal Frying Pan.

I’ve been saying for a while that Full Metal Wall GX is the best attack in the game’s history. I stand by that for now, but haven’t been confident in this card as a whole because it’s bad against Reshiram & Charizard-GX, even with Metal Frying Pan equipped. While the GX’s discard effect isn’t crucial for this deck, the damage-reduction effect helps our Metal-types tank through entire matchups on their own. The discard is just a nice bonus and helps against Pikachu & Zekrom in case Vileplume isn’t working for whatever reason.

The option to take Prizes with Steel Fist adds another potential win condition which is nice. If you happen to KO something with Steel Fist, that can be a way to remove Energy from the board as well.

One Solgaleo Prism Star, One Registeel

These Metal types are excellent tanks thanks to Full Metal Wall GX and Metal Frying Pan.

Registeel is my pet card right now. I think it’s cool that it can take an 80-damage reduction on all attacks. To be honest, a well-formulated argument could probably talk me out of Registeel, but I think it’s a solid option.

One Lugia-GX, One Counter Gain 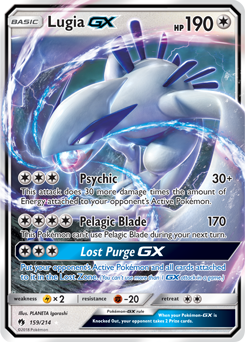 I believe that, with the meta’s evolution, a copy of Lugia-GX is now necessary. First and foremost, it removes Arcanine and Oranguru with Lost Purge GX. It can also remove anything with Stealthy Hood, lots of Energy, or both, like a Reshiram & Charizard-GX. In other matchups, you’ll probably want to go with Full Metal Wall GX instead of Lost Purge. Lugia also provides this deck with the option of a powerful attacker via Pelagic Blade. Lugia also makes the Quagsire matchup winnable, though it’s definitely still unfavorable.

Counter Gain‘s inclusion should be obvious: it allows an instant use of Lugia’s Lost Purge. All of the pieces needed to pull off this move can easily be searched with Steven's Resolve.

While Lugia is a necessary inclusion in the deck, sometimes it is unavailable and sometimes it is too much of a liability. Girafarig can step in to help against any deck with Oranguru.

I also think more random Oranguru may pop up to counter Shedinja, which makes Girafarig better. Girafarig itself helps against Shedinja as well.

One Tate and Liza

A switch effect is necessary to pull off Lost Purge GX if the desired target is Active. Tate and Liza is the preferred method because it also fulfills the role of preventing yourself from ever decking out.

This mitigates the usefulness of Judge, which led to my decision to cut Judge. However, now we have an auto-loss to the mirror variant with Unown HAND, which might be bad. If you would like to beat Unown HAND, add Judge back in and abuse Girafarig in that matchup.

This card is brutally strong in this type of deck. Team Skull Grunt is useful against any deck that does not infinitely pull Energy from the discard. It also limits your opponents options by preventing them from hoarding cards to make combos that involve Energy.

It is with a heavy heart that I removed the Crushing Hammers. The cuts had to be made somewhere, and Crushing Hammer, while still strong, was the least integral component of my previous list.