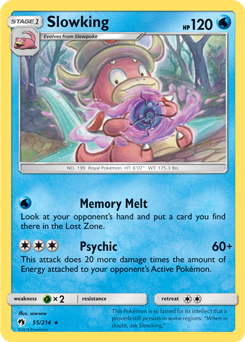 Playing control-style decks has worked well for me and my friends all year. The most recent concoction is more or less an update to the Zoroark-GX / Control deck of the Standard format. Reshiram and Charizard-GX has been extremely hard for control decks to beat, just because it can accelerate so many Energy at once and that it plays so many Energy to begin with. Have no fear, though, Slowking is here! This card has never been played before because we didn’t have Triple Acceleration Energy. Psychic does 60+(20*4) for 140, then doubled against the Water-weak Reshiram and Charizard-GX, 10 more than needed for a one-hit Knock Out. This is excellent and Slowking also offers help as a backup attacker in other matchups, although its inclusion is strictly for the new Fire deck matchups.

This deck fell off at the European International Championship because not many people played it and some decks had begun to adapt to it by playing cards like Field Blower to discard Bodybuilding Dumbbells and score easier Knock Outs. Most importantly, I think that the deck was simply not played much so it never had a chance to do well from the onset. Slowking is going to score you some “free” wins in today’s metagame and the control strategy is as strong as ever against the rest of the decks out there.

So last time I talked about a different Zoroark-GX plus Water type, Gyarados. I think this deck is slightly better, but it’s obviously a drastically different style of a deck taking the control aspect instead of the more aggressive one with Gyarados and its high Venting Anger damage output. I personally like control decks more than attacking ones, so if you agree then this one is the one for you. Reshiram and Charizard-GX continues to dominate the online game, I have faced so many lately and watched many colleagues do the same. It will likely be the most played deck come this weekend in Santa Clara, California, so I want to beat that deck for sure before doing anything else. When you have such a popular deck you need to make sure that you can beat it, then move forward and work on beating the second most, third most popular decks, and so on. Here’s the list I’ve got for the deck right now:

In my Colorado Regionals-winning list for this deck I infamously had two of each of these. This was for Zapdos matchups to ensure that they could be beaten with easy every time. While Zapdos remains, I expect it to fall off a bit in popularity simply because there are so many new decks siphoned into the metagame with the release of Unbroken Bonds. Zapdos is still a great deck but there are simply so many more options of things you could play now that I think the metagame will disperse a little instead of being so centered around one deck. Nonetheless, it would still be nice to have the thicker line to retain the same sort of matchup if Zapdos does pop up, but space must be made to fit Slowking and the Triple Acceleration Energy to go with it.

Two of each of these will bolster your matchup with Reshiram and Charizard-GX to heavily favorable. With just one, they can take a Knock Out and you won’t have another on the Bench and be forced to use your Rescue Stretcher immediately to get back into the game. Rescue Stretcher is hard to find as a one-of and regardless you want to be able to attack with Slowking and then go into another after it’s Knocked Out. It is a decent attacker against other matchups too, the new baby Blacephalon and even against Pikachu and Zekrom-GX to chip away and set up a Knock Out for a Riotous Beating. I have gotten more utility out of this line than expected outside of the Fire matchups so there is no good reason to deviate from the consistent two-two line. The Psychic-type Slowpoke does not have Yawn to make something sleep like this Slowpoke, but being able to target it with Mysterious Treasure is more than enough to warrant its inclusion instead.

There are two main decks that play Special Energy: Zapdos / Ultra Beast and Zoroark-GX variants. Zapdos is a matchup where you’ll be attacking with Zoroark-GX the whole time and it makes no difference if you have Enhanced Hammer because you’ll be taking one-hit Knock Outs each time. Against mirror matches, you still have Crushing Hammer although I will admit that the matchup does get worse. Crushing Hammer, though, is better against literally everything else and is better for that. Pikachu and Zekrom-GX as well as Reshiram and Charizard-GX have so many Energy that you need to get rid of so having the full four Crushing Hammer is important so that you can find them early and sometimes even put back three at a time with Resource Management. If Zoroark-GX increases in popularity, it’s also another deck that’s suffered from the release of decks like Reshiram and Charizard-GX. 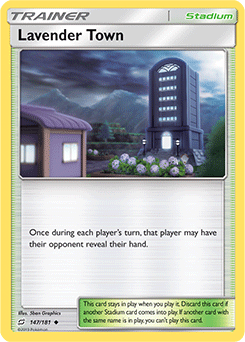 Eventually you build a hand lock with this deck through Judge. With Lavender Town you can be informed, know when that happens and make just decisions. When you know your opponent has a dead hand then you can get back different things with Resource Management or switch over to attacking with Zoroark-GX to put on pressure by taking Prizes. Having perfect knowledge of the game other than your opponent’s draw for turn is incredibly strong and finishes off an infuriating lock.

Zoroark-GX with 250 HP avoids Knock Outs from many things and having three of them helps you find them early and then have more for later if your opponent plays Field Blower. The Pikachu and Zekrom-GX matchup is impossible without Bodybuilding Dumbbells so you need to play it. It’s also strong against Zapdos decks and you can even put it on your Alolan Muk to make Guzma Knock Outs on that difficult to pull off.

Against Reshiram and Charizard-GX you only need two to score the two Tag Team Pokemon-GX Knock Outs you need to win the game but three is nice insurance in case you Prize one. I like three because you can also just use it with your Zoroark-GX in games where you attack with that. Having more than just four “Double Colorless Energy” is strong and makes this deck more consistent, at least in the attacking department.