Gyarados has managed to win a Regional Championship this season, but it’s not done there. Triple Acceleration Energy has joined the fray with Unbroken Bonds and now Gyarados has some more firepower to last in longer games. Other than that, there’es not much that has changed since the deck last made an appearance. The aim of the deck is to get the Magikarp in the discard pile, giving you a solid one-Prize attacker in Gyarados. Beyond that, it maintains the same qualities of any other Zoroark-GX deck.

Philip Schulz took this deck to first place at the aforementioned Regionals using the Professor Elm's Lecture variant of playing Zoroark-GX, but with a developing metagame that abuses Marshadow in droves, Let Loose protection is a must. This list instead uses Lillie and Item search cards allowing you to get both Magikarp in your hand and then Trade them to the discard pile to power up your attack. 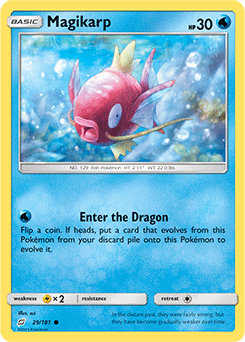 While super unpopular these days, Chimecho can stop you from playing a Magikarp from your hand, preventing you from getting Gyarados into play. Nest Ball does get around that, but it’s never bad to be even more prepared. Additionally, it doesn’t count towards Evil Admonition from Weavile. It’s nice to just have another option in case you want it and the only time it will ever really hurt is if you find it in your opening hand, have to start with it in the Active, or are playing against a deck that spreads damage. This is also the best one to play because its attack doesn’t hurt you much if copied by Nihilego mainly because it has no potential of inflicting damage.

Triple Acceleration Energy almost accidentally works well with Max Potion. It discards itself at the end of your turn, plus Gyarados and Zoroark-GX are so beefy that they can take a hit. If you’re damaged you can Max Potion, put another Energy down, and keep attacking. Gyarados healing itself is very difficult for Zapdos decks to deal with in particular — it just makes you the stronger non-GX deck. Max Potion is faster and more efficient in this deck since you’ll be using Triple Acceleration Energy often and then you don’t have to waste time with Acerola.

Ultra Ball, Pokémon Communication, Nest Ball, and Mysterious Treasure aren’t enough for me, I wanted to ramp this deck’s consistency up even more and that’s where the Great Ball come in. Having 16 Pokemon search cards is very nice, boosts your first turn Lillie odds by giving you more ways to find Tapu Lele-GX, and they also help you find Magikarp quickly, giving you more ways to put them in your discard pile.

Gyarados isn’t always the attacker you’re looking for, so Switch can get it out of the Active without burning a Supporter for the turn. Its massive Retreat Cost doesn’t make it easy to retreat manually, so having a single switching card is nice as a way to pivot around to a Zoroark-GX or even Tapu Lele-GX for an Energy Drive.

In the past you were only playing with four Double Colorless Energy. Now, you effectively have seven Energy, and while these get discarded after their use, it’s amazing to have more Energy — more ways to attack quickly. In matchups where you’re trading Knock Outs quickly these really help, where in the past you had to incorporate a backup control package into this deck so you could afford to use Oranguru to Resource Management and get some Double Colorless Energy back. Oranguru is still included in here because you want an answer to control decks which are on the rise once more with the release of Lt. Surge's Strategy.