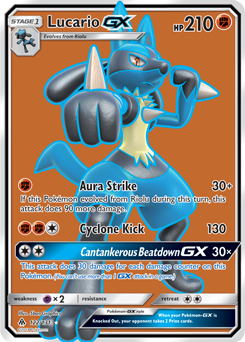 The Oceania International Championship came to a close last weekend. It was an amazing event for me: I came close to a second International Champion title, losing in the finals to fellow writer Isaiah Williams. Beyond that, I enjoyed visiting Melbourne for my first time travelling to Oceania.

As you may have seen, heard or read by now, I played Zoroark-GX / Lycanroc-GX / Lucario-GX, a unique take on the deck that Benjamin Phan suggested to me few days before the event. Oceania Internationals was not the first time that this combination of Pokemon was played; it had some success at League Cups last season when Lucario-GX was first released; though, I’m pretty sure it was the first time the deck did anything this season. Zoroark-GX / Lycanroc-GX is nothing new; I’ve explained before why I considered it a safe pick going into an unknown metagame. The Lucario-GX innovation was to beat the scary new challenger, Pikachu and Zekrom-GX.

Many people have asked me about the deck — some already used it to success in League Challenges, others are planning on taking it to Regionals. In this article, I will tell you about how the deck came to be, the reasoning behind the inclusion and exclusion of some cards, and the deck’s matchups. I will also discuss the future of the deck as the meta evolves according to the results of the International Championship.

I arrived in Melbourne on Sunday evening, along with Dutch players Bert Wolters and Bryan de Vries. After some complications that are not interesting enough to relate here, we settled into our hotel. At this point, I was feeling confident with Malamar / Ultra Necrozma-GX, while my roommates were testing Lightning decks, mainly Pikachu and Zekrom-GX.

The next day, we messaged Robin Schulz in order to meet up to playtest. In the afternoon, we went to his apartment, which came to be referred as the “Broken Airbnb”. Over the week, many European and American players gathered there to play many games of different matchups. This playtesting allowed us to revise our opinions on the metagame. For example, I became frustrated by losing again and again to Pikachu and Zekrom-GX with Malamar, despite trying all sorts of techs, including Gengar and Mimikyu-GX, Dawn Wings Necrozma-GX, even Wondrous Labyrinth Prism Star. We also built a Zapdos / Jirachi list that had a lot of potential. Bert, Bryan, and Robin ended up playing the updated version, with Bert achieving a Top 8 placement with it. I liked the deck, although I felt the pure Lightning version was more consistent. Had I played the deck, I would have included Jolteon-GX over the Buzzwole / Nihilego package.

At that point, Zoroark-GX decks were not performing well. Most of our testing group wouldn’t touch them, stating that Zoroark-GX was not good enough right now. On Wednesday, though, Benjamin Pham sent us a Zoroark-GX / Lycanroc-GX / Lucario-GX deck that I decided to try out. I must point out that, without the massive volume of games we played with other decks, I would have never tried out the deck; it’s only because we had a good understanding of matchups between the other decks like Malamar, Zapdos / Jirachi, Pikachu and Zekrom-GX, and Lost March, that I felt it was worth trying out this idea. We realised that the deck did well against the most powerful deck: Pikachu and Zekrom-GX. The deck also beat the pure-Lightning versions of Zapdos / Jirachi, but wasn’t especially favored against the Buzzwole version, and its Malamar matchup was 50-50 with the opening coin flip being primordial.

As I kept refining the list, it became apparent that it was a potential play for the weekend. Sam Chen and Rahul Reddy also expressed interest in the list, but switched back to Pikachu and Zekrom-GX on Thursday when I lost two best-of-three matches to our Pikachu and Zekrom-GX list. Although we agreed that the matchup was in favor of Zoroark-GX / Lycanroc-GX / Lucario-GX, they didn’t want to play the deck unless its matchups were favorable enough.

I was worried about playing the deck, but I felt it was my best option. I sleeved the deck up on Thursday evening and went to bed.

This is the final list I took to the International Championship. As usual, I will not bore you by explaining every single card, but only those that warrant discussion.