I’m back from Dallas! Traveling to another continent for a Regional Championship was a new experience for me. Sure, I’ve been to Worlds and Internationals, but in these events, there are players from all over the world, including a contingent of Europeans. In Dallas, my friend and teammate Fabien Pujol and I were, as far as I know, the only players from outside of North America, so we were less participants in an international event and more like strangers crashing the party. That said, I had a great time there, and it was an occasion both to reunite with American friends and to meet new people. On that note, thanks to everyone who came to talk to me during the weekend! It’s always wonderful to meet fans.

As for my performance in the actual tournament, I didn’t do so great, ending up at 5-4 and barely salvaging 30 CP, playing — what else? — Zoroark-GX  / Garbodor. Although I expected to do better, Fabien reached Top 8 with the same list, so I don’t regret my choice. In this article, I will go over the deck I played and explain the less obvious choices, and discuss how my rounds went and what I could have done differently. My goal is not to give an in-depth review of each round, but to identify the mistakes I made, both during my preparation and in the actual games, in order to do learn — and, in this case, teach — from them.  I also give my thoughts about the current state of Expanded and how the release of Team Up may affect the format.

Here is the list I played in Dallas. It was developed by Xander Pero, Fabien Pujol and I. All three of us ended up playing it (Xander’s list was actually off by two cards) but only Fabien had success with it.

A lot of the list is pretty standard fare, and I won’t bore you with it. I know that some players exclude Trashalanche from their lists, but I think it’s a solid secondary attacker, and having Basic Energy is almost necessary anyway. They help to retreat, and make you far more resilient to Faba and similar hate cards. You can attach the two Psychic Energy to a Zoroark-GX if needed. They also allow you to use Trubbish’s Garbage Collection, which brings me to the first actual innovation. 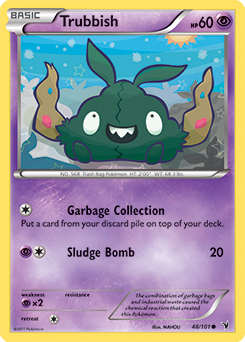 In my testing, Garbage Collection was very useful in the slowest matchups. Against stall decks, you can get early Prizes by shutting down the Abilities of Xurkitree-GX and other walls with Garbotoxin, but when a Magikarp & Wailord-GX hits the field, you can’t knock it out in one hit, and you’ll have to face an endless stream of Max Potion and Acerola. In this situation, you can use Garbage Collection to bring back Dowsing Machine on top of your deck, allowing you to re-use Items every turn. The idea is to use the Red Card and Delinquent combo over and over again, forcing the opponent to discard precious resources. In the end, you can win the game this way, or at least force them to discard enough Items that Trashalanche becomes a real threat to their Pokemon.

Most lists include a copy of Garbage Collection Trubbish for this particular reason, but I decided to make all my Trubbish the Garbage Collection version because I couldn’t see a reason to use any other one. Having 70 HP is not particularly relevant in the current metagame — it would be against Trevenant BREAK, but that’s not a very popular deck. I do have to say that the Guardians Rising Trubbish‘s Stomp Off could have won me one game at some point. However, the real downside to the other Trubbishes is that they have a higher Retreat Cost. Garbage Collection Trubbish can retreat for one Energy, which is very convenient if you happen to start the game with a Psychic Energy in hand.

Mime has some utility against Buzzwole-GX decks, as rare as they seemed to be. However, its real point was to counter Magikarp & Wailord-GX in Archie’s Blastoise decks. That card was very much hyped in the days coming up to the Regionals and it seemed like most Blastoise decks would use it, both as a solid, 300-HP attacker that can one-shot Zoroark-GX with a Choice Band, and as a way to take multiple Prizes with Towering Splash GX. Mr. Mime prevents that use. It must be said that some Archie’s Blastoise lists have started including Silent Lab in order to counter Mr. Mime (as well as Wobbuffet). Still, forcing them to have a counter to your counter is a good thing, especially since Silent Lab is not easily accessible. If you can, you should play around Silent Lab by not benching more 100 HP-or-less Pokemon than you need, so that your opponent doesn’t win the game even if they manage to get a Towering Splash GX off. In the worst case scenario, Mr. Mime is a Basic Pokemon that you can bench for more Riotous Beating damage, so it’s never totally a dead card.