Happy new year! I’ve been absent for a little while, as I took some time away from Pokemon during the holidays. Well, not totally, of course; I’ve been playing some TCGO, and I always keep an eye on League Cup results, even though I’m not playing in them. Still, it’s good to be back, and I have a very special deck to share, to start the new year.

Of the three Unown from Lost Thunder that reintroduced alternative win conditions to the game, Unown HAND has been by far the most successful, giving stall decks like Hoopa  / Regigigas  / Shuckle-GX in Standard a way to win without waiting for the opponent to deck out. Unown MISSING is terrible since there’s no guarantee, in either format, that an opponent even plays as many as 12 Supporters. However, Unown DAMAGE is the one with untapped potential, especially in Expanded. This is the deck I want to talk about today, and my pitch for it will be simple:

The previous sentence would be shocking to many TCG players. In a game where a player can’t act during their opponent’s turn, this means that if Unown’s opponent goes second, they only have one turn to play before they lose. I can’t stress enough how insane this is. It should make Unown DAMAGE the default deck for Expanded, the benchmark that determines whether a deck can compete in the format. Fortunately for the health of the game, though, there are ways to beat it, even when you only have one turn to do so. To explain how this is possible, I should first present the concept of the deck.

I’ve argued before that the traditional notions of aggro, control, and combo decks, useful in other TCGs, don’t really apply to Pokemon. That being said, Unown DAMAGE is unequivocally a combo deck. Your goal is to assemble the following pieces: Team Magma's Secret Base, Weavile, Reuniclus, Klefki, two beefy Pokemon to hold many damage counters (Magikarp & Wailord-GX, legal at Dallas Regionals, is ideal thanks to its huge 300 HP), and of course Unown DAMAGE in the Active. When this is done, you win the game.

The combo works this way: you bench Klefki from your hand. Because of Team Magma’s Secret Base, it receives two damage counters. Using Reuniclus’s Damage Swap, you move these counters to another Pokemon. You then attach Klefki to one of your Pokemon using its own Wonder Lock ability, then use Weavile’s Tear Away to take Klefki back into your hand. You’re back to the beginning, except there are two damage counters in play. Repeat this loop until there are enough damage in play, then use DAMAGE to win the game! (Actually manually repeating the loop is tedious, but your opponent should understand what’s happening.)

It may seem like that’s a lot to get together, but it’s actually easier than it looks — although you’ll need to practice to make sure you play every hand in the optimal way. In this article, we’re going to take a look at the list to understand how the deck works, then I’ll list the cards and strategies that give this deck issues, and whether they can be overcome. This will give us a better understanding of the deck’s matchups and place in the metagame.

Players have theorized about Unown DAMAGE as soon as the card was revealed, but to give credit where credit’s due, the following list is heavily based on one that was sent to me by Belgian player and cool guy Lennert de Clercq. He played the deck at a League Challenge (as I keep repeating, Expanded is not exactly well supported in Europe) and was nice enough to provide me with his list.

It’s not surprising that we only play two copies of every Pokemon in the deck (except Ditto Prism Star of course). It’s a combo deck, so we only need to assemble one of every piece of the puzzle. All the Pokemon can be searched out thanks to all the Items; the only piece of the puzzle that we need to play a full playset of is Team Magma's Secret Base, because there’s no way to access it apart from drawing and Trainers' Mail.

I want to discuss some choices in the list. 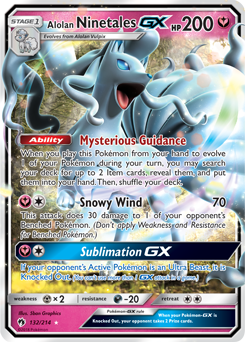 Alolan Ninetales-GX is a great card when you’re looking for some specific cards, which is exactly what this deck is about. It is especially useful to look for Rare Candy, but it will basically always find a purpose. Its other benefit is its HP. With Ninetales, Magikarp & Wailord GX, Reuniclus and Weavile in play, your Bench can hold 64 damage counters. If you have Unown in the Active spot, you just need to bench your Klefki one last time after your last loop in order to reach the required 66 counters. Since all these Pokemon are ones we need to play anyway, we don’t sacrifice anything by using Ninetales rather than another big Pokemon to receive damage counters.

This Pokemon acts as both Alolan Vulpix and Sneasel, which makes it a useful part of the deck and generally the first Pokemon to search for if you have a Nest Ball or Level Ball in your opening hand.

I like how this card only finds its way in the weirdest decks. The point of Ditto is to act as any Pokemon. Once you have a Solosis, Vulpix and Sneasel (Ditto Prism Star can substitute for either of the latter), and you fear that your opponent will KO one of them, then Ditto is the perfect backup. For example, even if your opponent brings Solosis into the Active to get an easy KO on it with Sky Return, you can always search for your other Solosis, put in onto Ditto, then Rare Candy to evolve it on the same turn. If you’re not used to this, it works because your Pokemon has been in play for one turn (as a Ditto). Even if your opponent doesn’t take any KO and all your other Pokemon evolve, you can always play Magikarp & Wailord-GX onto Ditto, so it’s not wasted. It’s also worth noting that Ditto’s HP allows it to tank the 30 damage from Jet Punch when it’s on the Bench, unlike Solosis. However, if you only have one Ditto and no Solosis benched, your opponent can still deal the 30 damage to Ditto and prevent you from playing Solosis on top of it, so don’t only rely on it.

If you plan on ending the game within two turns, you don’t need a lot of Supporters. Lillie helps a lot in setting up on your first turn, and Random Receiver acts as additional copies that also thin out your deck. Plus, you get to enjoy your opponent’s face as you reveal a bunch of never-played cards from your deck! More importantly, as an Item, Random Receiver can be found by Mysterious Guidance and Order Pad.

These cards help you find other Trainers and therefore set up your combo. I don’t like to rely on the coin flip of Order Pad, but just like in Archie’s Blastoise where a turn one heads generally all but guarantees a turn one Archie’s, a single heads on Order Pad, giving you the card you need at the right time, can be enough to win the game. Acro Bike was a consideration, but it wasn’t effective enough, and with so many combo pieces, there’s a significant risk that Acro Bike would force you to discard one, which complicates matters.

One Scoop Up Cyclone

This is probably the biggest surprise in the list. Computer Search is the obvious safe option for a deck looking to assemble some cards, but Scoop Up Cyclone does three things for the deck. First, it can retrieve Shaymin-EX, to draw cards. Second, it can get Pokemon back in your hand to free some Bench space. As I’ll discuss later, Bench space can be an issue for this deck. Finally, you can use it to reuse Mysterious Guidance, if you have a Ditto or Ditto Prism Star on the Bench. For example, I discussed earlier how Ditto was a good backup Pokemon. If no Pokemon gets KO’d, you can still make use of it this way: evolve Vulpix into Ninetales and use Mysterious Guidance to search for Scoop Up Cyclone and another item. Then Scoop Up Cyclone Ninetales, Transform Ditto into Vulpix and evolve it again. You can get two more Items with Mysterious Guidance this way.