Hello everyone! This is Grant here once again. I just attended Anaheim Regionals but I didn’t really put too much time into Expanded. In fact, the decks I have put the most time into are both in the Standard format. I’ll have another article coming out in a couple of weeks that focuses on the Expanded format. Anyway, I am going to talk about two decks that are currently extremely strong in the Standard format. The first is my Disruption list. It is a refined version of the Shuckle-GX / Hoopa deck I played in Roanoke Regionals. I realize this deck triggers a lot of people. I too hate playing against mill archetypes when I have an autoloss against them. That said, it is an extremely strong archetype right now, so it is worth discussing.

I don’t always name decks, but when I do, I try to be clever about it. This is what I consider to be the optimal mill list for Standard League Cups. For Roanoke Regionals, I played Shuckle / Hoopa. Instead of the Regigigas / Ancient Crystal package, I opted for Mt. Coronet and Metal Energy so I could chain Plumeria. I also liked the option to pressure my opponent with Triple Poison. Wrap GX was occasionally useful against INVALID CARD SHORTCODE and Swampert among other things. I also had Hau in the deck for some additionally draw-power. The validity of that decision may be questionable, but at least now I can say I got CP with Hau.

However, I think that Regigigas adds value in nearly every matchup. Additionally, the Regigigas package turns the previously close Blacephalon matchup into a near auto-win. In order to fit Regigigas and Ancient Crystal, I cut the Coronet package, the Hau, and a few other cards. 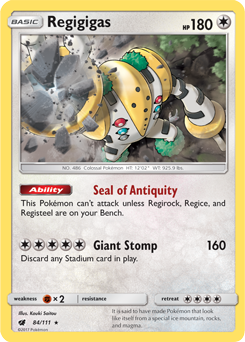 Regigigas’ usefulness is most apparent against Blacephalon. Blacephalon-GX does not run enough Energy to take out all of the Regigigas even after being softened up by Turning Point. If they try to use Naganadel, you can infinitely loop Acerola. Of course, a tech Naganadel-GX does win them the matchup regardless. In any other matchup, Regigigas is basically a better Steelix. Steelix is extremely bad when Regigigas exists and does everything better. Sure, it has 10 less HP and a Fighting Weakness, but it doesn’t have to evolve from a weak Basic that is exposed after every Acerola, not the mention the beginning of the game. Regigigas is also useful against Zoroark decks with Alolan Muk. With only Shuckle and Hoopa, Zoroark can sometimes apply too much pressure if a few things go its way.

Shuckle-GX is possibly the best wall in the game. Its Ability pairs with the Energy disruption strategy perfectly, ensuring that most opponents won’t ever be able to deal damage. Shuckle gives you near auto-wins against Granbull, Buzzwole-GX, Lost March, and other similar decks. You can use it against Zoroark variants as well, because Weavile and Rockruff can tear through Hoopa in some situations.

Hoopa is the final “wall Pokemon” in this deck. Its Safeguard Ability prevents it from being affected by any Pokemon-GX. Obviously, this means that it’s used against decks such as Gardevoir-GX and Zoroark-GX that rely primarily on Pokemon-GX to attack. Hoopa can be good against Buzzwole in some situations, though usually they will be able to KO it.

Cold Crush GX is disgustingly powerful in this sort of deck. Since this deck is slow and somewhat inconsistent, it isn’t uncommon for opponents to get in multiple turns of uncontested Energy attachments. In case that happens, one Steven's Resolve for the Articuno-GX and the Rainbow Energy erases any momentum your opponent may have been able to muster up. Articuno is especially necessary against Gardevoir, and it can even seal games after your opponent has used Twilight GX. Articuno can be used in any matchup should the situation call for it, though sometimes you won’t need it at all. One thing to remember is that the Rainbow Energy can be placed anywhere for convenience since Articuno moves it to itself. Most of the time you want the damage counter from Rainbow Energy on the Articuno so you can use Acerola on it next turn, but that isn’t always the case.

I actually think Unown HAND is technically bad in this deck, as it only wins you games you already have sealed. However, it is a necessary evil for the single game format that is played in most League Cups. Opponents will probably be able to draw out a tie if you rely on them decking out.