Fresh from the excitement and glamour of the World Championships, we jump quickly into the 2019 season! With little time before the first U.S. Regional Championship of the year in Philadelphia, we must adapt to the monumental change of our recent rotation. Professor Sycamore, N, and Garbodor left the format, Buzzwole-GX lost many tools, and new decks emerged to fill in the gaps. With all of these changes, how does one prepare for League Challenges, let alone Regionals? 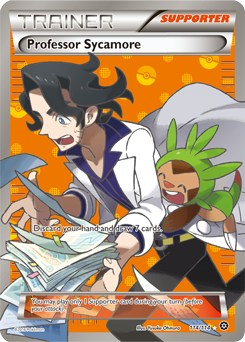 I find set rotations exciting. Everyone gets a fresh start. Not just players, but Pokemon as well! Cards that never saw the light of day become viable and the mad rush to adapt leads to interesting tournament results. Unlike other times of the year, we lack an established meta and past tournament results to fall back on, making it tricky to find the best deck. Our recent rotation throws out seven years of Supporter standardization out the window. Some Juniors playing today weren’t even alive the last time we didn’t have Professor Sycamore or Professor Juniper. And with a brief exception back in 2016, the same could be said for N! This change brings a wonderfully diverse meta as different players with different opinions of “good” explore yet unrefined concepts and deck lists. Remember, at this point in the season, any deck could succeed and we should all expect the unexpected. So spend some time experimenting with new decks – other players certainly will!

In this article, I explain how I navigate the Standard rotation and how you can too! To start, I examine at what we lost in the rotation, and what decks and concepts gain the most as a result. From there, I expand on that information to explain some of the early trends in the new Standard meta, as well as the early tournament results. Finally, I conclude with my strongest picks going into Philadelphia — including a certain Zoroark-GX / Magcargo / Guzzlord-GX deck that caught my fancy.

When I try to find the strongest decks after a rotation, I start by looking at cards we lost and evaluating how that affects the top decks. But rather than going through every single card, I focus on ones in top decks from the World Championships. In general, if a top-tier deck loses little, I expect it to remain top-tier. Likewise, decks pushed out by top-tier decks, can make a comeback if said top-tier decks lose a lot. With that in mind, we can then begin to paint a picture of the Standard meta going forward.

Losing Octillery, Max Elixir, and Strong Energy hurts Buzzwole decks a lot. While the simultaneous rotation of N mitigates the loss of Octillery, the loss of Max Elixir and Strong Energy slows the deck’s aggression. The speed of Buzzwole-GX decks before rotation contributed greatly to its success. Without Max Elixir, a player typically cannot threaten knuckle impact until the opponent activates Beast Ring. As for the one-Energy attacks, the loss of Strong Energy diminishes the damage output throughout the game, particularly limiting the deck’s ability to take early KOs on evolving Basic Pokemon. While Beast Energy Prism Star remains (and can be searched by Lisia), its Prism Star status can put Buzzwole into a precarious situation when removed. The deck still hits hard, but I would not expect it return to pre-rotation levels of play. 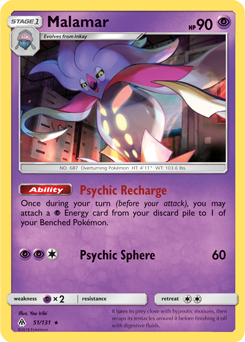 Malamar retained most of its central engine through rotation. The all-Psychic version of the deck lost Hoopa, while the Ultra Necrozma-GX version of the deck became less consistent with the loss of Professor's Letter. Both versions lost Float Stone, but can replace it with Altar of the Moone and other switching cards. The departure of Parallel City from the format bodes very well for this deck, meaning that Malamar can maintain a healthy bench. With access to Mysterious Treasure, Nest Ball, and Ultra Ball, Malamar decks also seem better prepared to cope with the loss of Brigette, giving it yet another advantage over the rest of the field. Overall, I would consider Malamar decks one of the safest plays in the initial post-rotation Standard format, given how little it lost.

Losing Max Elixir forces Rayquaza-GX decks to find energy acceleration elsewhere. While the “pure” speedy version of this deck becomes unviable, Rayquaza-GX itself can still hit big numbers, comboing perfectly with Vikavolt. Indeed, early results mark it as a deck to beat going into Philadelphia Regionals. Despite losing the aggressive pressure it leveraged at the World Championships, Rayquaza-GX still secures spot in the meta as the rest of the format also slows down.

All Zoroark-GX decks lost Puzzle of Time and Brigette, and each of the popular variants lost pieces as well. Zoroark-GX / Garbodor lost Garbotoxin, a critical piece to the deck’s late game. Zoroark-GX / Magcargo lost nearly all of its disruption Supporters, including Delinquent, Team Flare Grunt, and N, while Zoroark-GX / Lycanroc-GX lost Strong Energy. Additionally, while Buzzwole decks became weaker, Zoroark decks also lost their main counter to them: Mew-EX. Zoroark still maintains much of its consistency advantage, but the number of tools it leveraged diminished greatly. Despite that, it continues to show plenty of results, especially as Buzzwole decks become less popular. Like Rayquaza-GX, I expect Zoroark-GX to remain for the near future.

One of the more unique concepts that surfaced just before the World Championships, this deck lost little after rotation. Like Buzzwole / Lycanroc-GX, Buzzwole / Shrine suffers from the loss of Strong Energy. The deck often sought to apply early pressure with Buzzwole and Shrine of Punishment in order to force item usage, which in turn fueled Garbodor‘s Trashalanche. The loss of Strong Energy, diminishes that early pressure and makes the deck easier to play around. The late game pressure, on the other hand, may become easier to get to, as other decks tend to rely more on item-based Pokemon search such as Nest Ball and Mysterious Treasure due to the loss of Brigette. Again, this deck will adapt to the new meta, but should remain strong if played at the right time.