I traveled to Ohio recently for some League Cup events. After I finished my first round I saw something that caught my eye: someone was playing Empoleon / Swampert. I was in awe as they had established a huge field of multiple Stage 2 Pokemon, and were evening making use of Super Boost Energy Prism Star. I love fun decks, but I love decks that are fun and competitively viable even more. I watched the game progress a little more as the Empoleon / Swampert player dominated. I was completely intrigued, and couldn’t wait to brew my own list and get to testing it. In a format filled with linear strategies, one-hit Knock Outs, and lots of luck; I figured this would be an amazing deck. This is the first article I’ve seen written on the deck in question and I feel it’s a kept secret right now. I hope you enjoy learning about something that could soon be popping into the hands of an opponent near you.

When I build a deck, especially something brand-new, I like to take as little outside bias from other players’ lists as possible. With this in mind, I scrolled through my entire collection online, searching for the best cards in this deck. I came to a few original thoughts:

This is the most consistent build I have at the moment. Another idea I am trying right now is a Plusle-based engine, because Draw for Everybody serves as Colress as an attack, and a fine way to set up. I believe Alolan Vulpix is better because of its Brooklet Hill synergy. I’ll delve into the interesting deck choices. 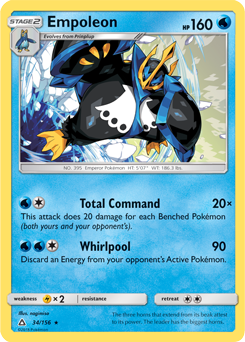 This is the optimal line for Empoleon. A strong base of four Piplup is a must as your main attacker will be difficult to solidify some games, so having extra Piplup ready to battle will be necessary so you don’t run out. Clever opponents will target them down before you can get Empoleon out, ruining your setup. Three Prinplup is nice because by default this deck has “six” Rare Candy targets: four Empoleon and two Swampert. You need the Stage 1 to supplement your setup and give you other paths to getting multiple Empoleon into play. I’ve found that landing one in your Prizes is brutal; using three copies is essential for success. Four Empoleon is critical, as drawing into it as well as a Rare Candy is a difficult task, so having as many Empoleon as you can play is necessary. It’s your main attacker, so you want as many out as possible, further stressing the need to play multiple copies.

Three Mudkip is good for consistency, and the Marshtomp assists you in setting up a second Swampert without having to burn a Rare Candy on it, leaving you to focus your Rare Candy use on Empoleon. Achieving a field with two Swampert is difficult, but once you have that setup it will be extremely difficult for your opponent to win. Swampert is your only draw power, and its attack is strong too, giving you a way to take two-hit Knock Outs in a pinch. You can even power it up in one turn with Super Boost Energy Prism Star if the option presents itself!

One Tapu Lele-GX and One Alolan Vulpix

I started off without a Tapu Lele-GX and slowly moved towards playing one. I don’t like putting it down, and starting it is even worse. This deck garners some of its strength from not attacking with Pokemon-GX, so having a Tapu Lele-GX as a sitting duck on the field is unfortunate. However, the way it brings extra consistency to the deck is worth it, providing Alolan Vulpix and Ultra Ball as a way to fetch an out to a Supporter card. The aforementioned Alolan Vulpix is critical to setup, using Beacon to fetch Stage 2 Pokemon that you can use Rare Candy into, or grab more Basic Pokemon. The options are endless, and it deserves a spot in the deck with the Brooklet Hill engine providing a way to snag it from the deck.