Hello again everyone! Philadelphia Regionals has concluded, and yet we already find ourselves facing down the next two major tournaments in Frankfurt and Memphis. Between the Melbourne SPE, Santa Catarina Regionals, and the aforementioned Philadelphia Regionals, we’ve now had three major events in our new Standard format, and it seems that the metagame is finally starting to solidify. Shrine of Punishment continues to be popular and dominant, and last year’s type triangle of Malamar, Zoroark-GX, and Buzzwole has come back as powerful as ever.

So, naturally, now that things have settled down, it’s time to introduce a new set! 64 new cards are about to arrive thanks to the new miniset Dragon Majesty. How important they will be remains to be seen, but as the set has just now become legal for tournament play, we’ll certainly have to account for them! Despite the set’s small size, plenty of cards appear promising.

In this article, I’ll be going over the recent results from the Philadelphia Regional Championships, and take a look at some of the deckbuilding trends that we saw in that tournament. I’ll also be going over our new Dragon Majesty miniset with an eye on how these cards can fit into our Standard metagame, either as techs or as decks of their own. I’ll finish this one up with some new Dragon Majesty-focused lists, so be sure to read through until the end!

As predicted, our Standard format remains diverse. In the 78-person day two in Philadelphia, 14 different decks were represented, with ten of them represented by more than one player. If we include variants (i.e., Zoroark / Lycanroc-GX as a different deck than Zoroark / Golisopod-GX), then we have a whopping 25 different decks represented! In the Top 8, that diversity remained, with the only duplicates being Buzzwole / Garbodor / Shrine of Punishment and Zoroark / Lycanroc. In the midst of all that diversity, four deck types — non-GX Buzzwole, Malamar, Zoroark-GX, and Vikavolt — stood out as being particularly dominant. All four of those decks ended up with at least one Top 8 spot, and between the four of them they managed to make up 55 out of the 78 day two decks, or just over 70% of the day two field.

Buzzwole-GX decks were the only other archetype to make up over 10% of decks played; the deck struggled to find success, with none managing to make the Top 32. As for the other decks, Magnezone, Metagross-GX, Ho-Oh-GX, Empoleon, and spread-focused Shrine of Punishment decks all made up multiple day two spots, with the remaining spots going one each to Gardevoir-GX, Sylveon-GX, Passimian, and Naganadel-GX / Stakataka-GX.

That said, the “dominance” of those decks can be a bit misleading. Thanks to the fine folks over at RK9Labs, we once again have the overall metagame data from Philadelphia. With this, we can see that the results for those top four decks are roughly in line with what we might have expected, given their meta share. Going into the tournament, decks from those top four made up roughly 73% of the meta (plus or minus a bit, depending on how you classify certain decks) — right in line with the 70% mark that they ended up with in day two. In fact, if you go down the list of decks, the results for each deck are strikingly similar to the expected results based on meta share, if all decks were evenly matched. This implies that not only is this Standard rather diverse, but it turns out to be pretty balanced as well! To this point, no single deck has managed to break through to establish itself as the top deck. So, while the meta share has become dominated by a handful of decks, the actual deck vs. deck matchups are still fairly even across the board.

When I first went over the deck lists from day two of Philadelphia, three cards — Field Blower, Enhanced Hammer, and Oranguru from Ultra Prism — struck me as being absent. All three of these cards have been common in past lists, and the lack of them are all exploitable.

Of the players in the Top 8, only one played Field Blower — and he only played one! Overall, most players chose not to include the card, with the only decks consistently running them being Buzzwole decks and Garbodor decks. This is quite a reversal from our pre-rotation format in which Field Blower was a consistent inclusion in about every deck except Buzzwole.

While dramatic, this change does make sense. Now that there isn’t any threat from Garbodor‘s Garbotoxin, the main rationale for including Field Blower is gone. Further, there are fewer Tool cards that Field Blower can reactively target now that Float Stone and Fighting Fury Belt are out of the format, as well as annoyances such as Bursting Balloon.

What this does mean is that preventative Tools, such as Metal Frying Pan and Weakness Policy, have an opportunity to shine. While Weakness Policy was an inclusion in Zoroark-GX decks to deal with Buzzwole, its use hasn’t spread outside of that deck. Darkness-weak Pokemon, such as Banette-GX or Lunala-GX, could be next in line to take advantage of it, as could other Pokemon which face issues with Weakness like Buzzwole-GX or Greninja-GX. In early testing, Weakness Policy has proven to be an effective tech, mostly in decks that have some sort of healing or utilize Acerola, as those decks can best take advantage of the prevented KO. 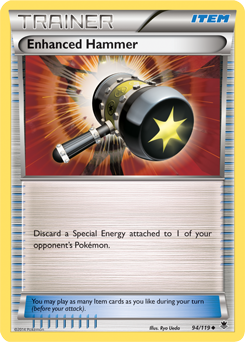 Given the number of top decks that now utilize basic Energy, the absence of this card shouldn’t be surprising. Without Strong Energy in the format, the main usage of this card is now for targeting Beast Energy Prism Star, Rainbow Energy and Double Colorless Energy — none of which are played in Malamar or Vikavolt decks.

That said, Special Energy were common in the top Philadelphia decks, making up a solid chunk of five of the Top 8 decks. While it wasn’t a common inclusion in Philadelphia, I wouldn’t expect that to stay the same going forward, given that players are already starting to take advantage of Enhanced Hammer’s absence.

As great as Oranguru is, its existence means the downfall of one kind of deck in particular: deck-out/stall decks. While these decks all got hit hard by rotation, mostly via the loss of disruption Supporters such as Team Flare Grunt, Oranguru was the card that truly made these decks unviable; after all, a single one was enough to completely derail the deck-out strategy. Going into this year, Oranguru was expected to be a common replacement in Zoroark-GX decks for Puzzle of Time — but that wasn’t the case in Philadelphia. Not a single one of the Top 8 decks played Oranguru, and only five of the top 78 decks (the three Zoroark / Golisopod decks, the Zoroark-GX / Weavile deck, and the Empoleon / Swampert deck) played the card.

For Wailord-EX-esque decks, this is wonderful news. This format is flush with tanky Pokemon that could be the centerpiece of such a deck. The key will be if they are able to get around the massive potential damage outputs of decks such as Rayquaza-GX and Malamar. If they can, I wouldn’t be surprised to see these style of decks begin to make a comeback, even with their losses from the rotation. They may need to wait for more tools to be released, such as Shuckle-GX, before people start to pick them up again.