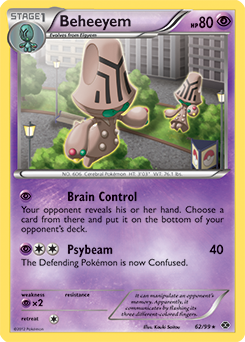 The 2018 World Championships are almost upon us — and even if you didn’t qualify for those, the Nashville Open and the next round of League Cups are right on its heels.

This will be my last article here before Worlds. In my last piece, I covered my testing process and included many of the conclusions I reached about the format. Now it’s time to cover each of my favorite Worlds decks in more detail.

This isn’t the “baby” Buzzwole-heavy build that took over the format towards the end of this past season: it goes back to the earlier versions of the archetype, focusing on Buzzwole-GX.

Why the change? The deck now needs to be able to consistently OHKO Rayquaza-GX as early as turn two, and continue to apply that kind of pressure throughout the game. Baby Buzzwole simply can’t deal that kind of damage in the early game. A secondary problem with the “baby” builds is that they are susceptible to disruption from a late-game N, particularly by Zoroark-GX decks — something that was exploited by top players late in the season. It’s important to play a high count of Buzzwole-GX to avoid situations where your opponent simply opts to not take Prizes early, thus disrupting the strategy of using Sledgehammer for maximum damage.

Three Buzzwole-GX and One Buzzwole

Again, this is a Buzzwole-GX-focused version of the deck. By playing three copies, you have a solid chance of opening with one. Since this list is not built to stream “poke” damage with Sledgehammer, only a single copy of baby Buzzwole is required. You’re going to be using it primarily when your opponent is at four Prizes to get the maximum damage out of Sledgehammer. You have Super Rod to recover it if necessary. 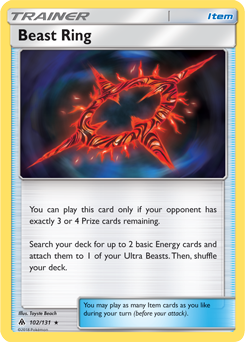 To optimize my chances of powering up two or even three Buzzwole-GX, I’m playing four Beast Ring. Prioritizing these over Max Elixir will make the deck’s mid game more consistent and protect you better against a late N. By playing as many Beast Ring as possible during your window to use them, you can power up multiple attackers and have them ready for the late game when you get hit with an N to a low hand size, especially if you haven’t gotten Octillery out.

The newest “necessary” addition to the Buzzwole archetype, Field Blower gives you an answer to a variety of issues that are too big for the deck to ignore moving forward. Fighting Fury Belt, Garbodor from BREAKpoint, Weakness Policy, and Wishful Baton are all seeing play now, and each of them is a hindrance to Buzzwole-GX / Lycanroc-GX.

Fighting Fury Belt sees some play in Buzzwole-GX / Garbodor and Rayquaza-GX decks and can make it difficult for Buzzwole-GX to OHKO opposing Pokemon-GX. Garbotoxin makes your deck work harder to execute its strategy by preventing Diancie Prism Star, Lycanroc-GX, and Octillery from using their amazing Abilities. Weakness Policy is climbing in popularity in almost all Zoroark-GX decks, which can make damage numbers awkward if you don’t have a way to discard it. Finally, Wishful Baton is troublesome in Rayquaza-GX decks, as it gives the Rayquaza-GX player a way to recycle Energy and maintain a high damage output even in the face of your KOs.

This deck’s biggest problem is consistency, and sadly there’s not much you can do about that. Higher Energy counts have always been the norm for this deck — it’s a necessary evil to increase your odds of hitting Max Elixir and Beast Ring. That makes it difficult to find slots for extra Supporters or other consistency cards.

Carbink is a hot tech if you’re worried about disruption decks denying your basic Energy. Carbink BREAK is kind of cute as well, but I wouldn’t play it — it’s too much to devote yourself into without altering your game plan for the worst.