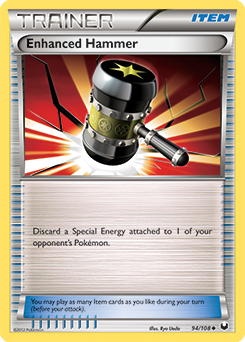 Last week, Pokemon announced updates to the ban list for the Expanded format. These updates added four cards to the list: Ghetsis, Hex Maniac, Wally, and Puzzle of Time. Many players, myself included, have been very vocal about the need for bans in Expanded, and this was a welcome change for many of us. Still others have expressed disappointment and confusion regarding the changes, so today I aim to provide more clarity to the rationale behind each of these bans. In addition to that, I’ll be discussing some of the ways we may see Expanded change as a result.

A Brief History of Banned Cards in Expanded

Pokemon has an almost perfect track record for banning cards for one reason: they prevent the opponent from playing the game. There are a small number of exceptions — Puzzle of Time being the most recent example. Some past examples are Shiftry from Next Destinies, Forest of Giant Plants, and Archeops from Noble Victories.

Lysandre's Trump Card is the other outlier, though it warped the game more than any other card I’ve ever seen. Decks before and after the Trump Card ban looked wildly different. In Japan, a player created a donk deck involving Latios-EX that used Lysandre’s Trump Card to run through his deck multiple times in a turn. He would take up the entirety of the match time in his first turn, taking a Knock Out and winning on Prizes in the end (Japan decided match outcomes by Prizes in time during this period). This aspect of Lysandre’s Trump Card was similar to the other bans, making it less of an odd man out than Puzzle of Time.

Shiftry’s Giant Fan Ability in tandem with Forest of Giant Plants created a way to win before the opponent had a turn. Forest of Giant Plants has been a problem card more than once, enabling a first-turn Item lock with Vileplume from Ancient Origins. Archeops, in combination with the popular Maxie's Hidden Ball Trick engine, crippled evolution decks to the point of unplayability.

Three out of the newest four bans follow Pokemon’s ban track record. That said, Puzzle of Time’s ban is a sign that Pokemon is willing to hit cards that they see as too powerful, not just obstructive to playing the game. This gives some hope regarding the future of Expanded in the long term. In the past, I’ve been critical of Pokemon’s unwillingness to act in any way in the face of deeply unhealthy formats, but the Puzzle of Time ban is the first sign that they plan to break this trend of inaction.

With the history of Pokemon’s Expanded bans paving the way, I’ll move into the new bans. With each, I’ll talk about which decks were affected and how the meta will likely change in their absence.

Ever since the release of Zoroark-GX, Hex Maniac has gone from powerful card to serious problem. While decks such as Night March and M Rayquaza-EX used it to great effect in the past, both decks had restrictions regarding its use that Zoroark-GX did not. Both of the other decks needed their Puzzles and VS Seeker for a variety of cards in order to keep attacking. Due to Zoroark-GX’s Trade and ease of setup, they could usually play Hex Maniac every turn of the game after the first. This turned into a hugely luck-based exchange where the player who got Hexed first would lose. After the inclusion of Red Card in nearly every Zoroark deck, this became an even more pressing issue to the point where games were won and lost on the first turn of the game. 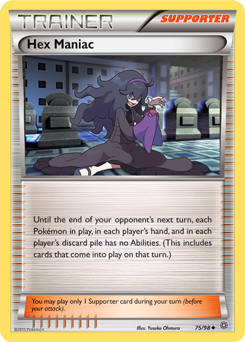 In addition to the aforementioned problems, the ease of looping Hex Maniac made it so that many Ability-based decks simply could not exist. The odds that a player hit three or more Zoroark or Night March decks in a day were high, and both of these decks had an easy time playing Hex Maniac for multiple consecutive turns. With Hex gone, many decks are now able to execute a strategy that they couldn’t before.

Zoroark-GX decks will also now have a much more difficult time answering Sudowoodo. Alolan Muk serves as a solution, but recovering it will be much more of a task than it has been in the past with Puzzle of Time’s absence. Zoroark decks can include a thicker line of Alolan Muk to have more ready access to it, but having it in play comes with the unfortunate consequence of shutting off Exeggcute. In addition to this, Knocking Out Alolan Muk is by no means a difficult task, so it may prove to be an ineffective solution. On the flip side of this, if Zoroark ceases to see play and Sudowoodo falls out of lists as a result, the format could once again see the rise of the fox. In this way, it could shift to become more cyclical, but this has almost always been the case in Expanded.

Another deck that will be affected by the ban of Hex Maniac is Trevenant. While Trevenant does lose Wally, the absence of Hex Maniac means that there is one fewer way to break Trevenant’s Item lock. On top of that, the only other remaining ways to circumvent Forest’s Curse — Guzma and Lysandre — become completely ineffective if the Trevenant player limits their board to only Trevenant. This makes their Item lock absolute in many cases. Its place in the metagame also improves, with Zoroark-GX variants being dealt a devastating blow by the new bans. It also does excellently against Buzzwole, the untouched tier-one deck of Expanded. I actually fear that Trevenant will grow to become the next great oppressor of the format, but time will tell whether this is a fair assessment.

The final deck that gains a serious boost is the previous king of Expanded, Psychic Box. Zoroark-GX was a natural enemy that ultimately removed the deck from the metagame completely. With Zoroark’s damage and popularity taking an inevitable hit, Psychic Box may see a return to its throne. This is compounded by the power and prevalence of Buzzwole-GX. Psychic Toolbox has a multitude of single-Prize attackers to take one-hit Knock Outs on any Fighting Pokemon that Buzzwole may play.

The format’s newest powerhouse in Buzzwole is not directly affected by the Hex ban, but its most common prey in Zoroark decks will almost certainly see less play. To compound this problem, Trevenant, Psychic Box, and Malamar all surge in power on the tail of these bans, none of which are favorable matchups for Buzzwole. On top of this, many decks in the format can include Mewtwo-EX as an even better answer to Buzzwole decks than Mew-EX is in Standard.

Out of all the bans, Hex Maniac’s departure from the Expanded format will have the greatest effect. While each of the other cards was a major player in Expanded in its own right, nothing defined the metagame like Hex Maniac.