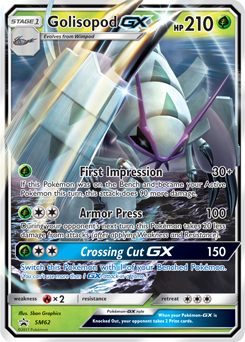 What’s up my PokeBeach readers? I have been scouring the Internet, pulling facts, building decks, and testing for the upcoming 2018 North American International Championships in Columbus, Ohio! I am sure most of you are as excited as I am which usually means that you want to do the best you possible can do at the tournament. Well, I already wrote an article that goes over Hoopa / Malamar, Buzzwole-GX / Garbodor, and Buzzwole / Buzzwole-GX / Lycanroc-GX earlier this week so check it out here. But wait, there is also this article here today, right?

I have found a trend when I have been doing my deck research heading into the NAIC and you would never have guessed it… Zoroark-GX / Golisopod-GX has been performing extremely well against the other top decks in the format! I started to notice that this deck has re-entered the metagame during my travels in Mexico and it has since gone on to win a large amount of Championship Points. In this article today, I want to showcase this deck’s recent success, look over Eder Jarillo Soto’s Mexico City Regional Championship winning list, and provide some insight into the deck heading into Columbus. I have been practicing with this deck on the side for about a month now and it has been one of my low-key picks for a while now. Without wasting time, let’s jump into some data on how this deck has been crushing tournaments worldwide:

Foxes and isopods… Am I taking about Pokemon or the Discovery Channel? This deck first appeared at the 2018 European International Championships in London, UK when Tord Reklev took this deck to a striking first place finish. While we can give Reklev and his testing partners kudos for getting the engine figured out, we can also thank some of other the current top players for re-defining it. After the 2018 Collinsville Regional Championships, I viewed this deck as dead due to Buzzwole-GX / Lycanroc-GX taking over the metagame at that time. However, the deck has recently made a resurgence largely due to some top players in Mexico. Let’s look over some of the top placements of this deck:

Looking at the plentiful results for Zoroark-GX / Golisopod-GX on a worldwide scale shows that this deck has what it takes to excel at major events!

In my testing, Zoroark-GX / Golisopod-GX has found a middle ground approach within our metagame triangle of Malamar, Buzzwole, and Zoroark-GX variants because the deck has generally even matchups. This is due to the deck having techs such as Mew-EX, Enhanced Hammer, Counter Catcher, and Max Potion to help the deck win some tough games. Beyond all of those nifty techs, both Zoroark-GX and Golisopod-GX share the same bulky 210 HP that can create situations where it is difficult to Knock Out those Pokemon. This deck carries its bag of tricks to each and every matchup and it ultimately is a huge force to be reckoned with due to its many lines of play available. My current favourite list for this deck is not my own because I think that Eder Jarillo Soto has created a fantastic list with his recent Mexico City, Mexico Regional Championship win! Let’s check out his list below and then dive into a more in-depth explanation: