Hello everyone! The next major event in the U.S. tournament schedule is Roanoke Regionals, and boy am I hyped for this one. Not only is Roanoke the first major US event with Forbidden Light legal, but it is also going to by my first Pokemon event after a two month long break. With all the Fighting-type support in the new set, Buzzwole-GX is gaining lots of hype. I think this hype is somewhat undeserved, as Zoroark-GX can easily incorporate techs such as Mr. Mime and Mewtwo-EX to manage Buzzwole, and Drampa-GX / Garbodor can add Espeon-GX. However, that’s not to say that Buzzwole is to be underestimated. Buzzwole will still see lots of play in Roanoke. Fighting variants saw some usage in Salt Lake City a few weeks ago, and the archetype only gains more strength with the release of the new set.

My goal for this event is to find a strong deck that is favored against the trio of Zoroark, Buzzwole, and Garbodor. This is easier said than done. I am currently considering a strange Glaceon-GX build as well as the Zoroark / Hex deck that I encourage you to check out in my previous article. However, the two decks that I will share with you today are stronger against Buzzwole than those other two decks. The first one may come as a bit of a surprise coming from me, and that would be none other than Night March. For once in its too long life, Night March is positioned quite well. With a few techs, it can easily destroy Buzzwole. It possesses the power to deal with most random decks, and it can thin its deck to the point where disruption such as Red Card and Garbotoxin doesn’t bother it a whole lot. Here’s my current list:

Sure, this is more or less a typical Night March list. You can go with the same general strategy in every matchup. Discard Night Marchers, blow things up. I like Night March now because it has drastically declined in popularity lately, and as such there is less of a presence of counters such as Karen and Oricorio. If you look at the past three Expanded events worldwide, Night March only has one obscure placement in the Top 32 in total. Therefore, if your opponent bothers to counter Night March, they probably aren’t very good and you should beat them anyway. Night March also destroys Buzzwole, so that’s cool too. Let’s go over some techs.

Mew is here to help with our insect invasion. Buzzwole decks pack high counts of Brooklet Hill, so we can’t always rely on Dimension Valley to enable our Psychic-type pumpkin. Mew can copy Joltik’s attack, and it can OHKO Buzzwole with ease. Mew also is an extra Night Marcher of sorts, so you don’t have to lose a Night Marcher when you already have nine or 10 in the discard.

Also known as consistency-boi, Oranguru makes it so that we don’t lose to N, and that’s really important. You can also use Psychic off Mew with Dimension Valley in play.

I’m putting Mr. Mime in every deck, and you should too. Mew would suck against Buzzwole if they could just Jet Punch it and Joltik for two Prizes, so Mr. Mime is here to protect our little guys from Jet Punches. Mime is also neat for blocking Tree Slams. Here’s the rule of thumb for deciding which Mr. Mime to use in your deck. If you run Wobbuffet or any sort of Psychic Energy (Unit, Rainbow, etc.), use the Mr. Mime from Plasma Freeze. If not, run the Fairy-type one.

If you can’t use Psy Bolt, the Fairy-type Mime is better for a few reasons. It’s got an uncommon Weakness to Metal, a potentially-relevant Resistance to Dark, and a really bad attack. The reason why you want a bad attack is so that your opponent can’t potentially copy a good attack instead. 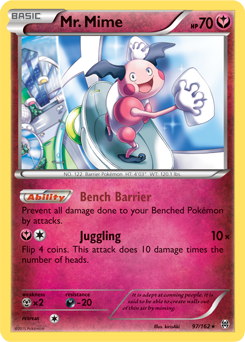 And here is your token controversial Grant decision! First off, Hex Maniac is almost completely useless against Buzzwole because it turns off your own Mew and Mr. Mime. It’s also mostly useless against Garbodor… for obvious reasons. That only leaves Zoroark, and usually you want to Guzma or Sycamore in that matchup to be honest. Hex is best used against Zoroark when combined with Red Card, and we don’t have that kind of space. Hex is still good to have in Night March, I’m not condemning it. I just find the spot to be better used on anything else that’s currently in the list.

This is a small tweak to the usual 1-4 lineup, and I actually have won games because of the extra N. N is useful for when you get those clogged hands with Puzzle of Time, VS Seeker, and other random stuff. This happens to Night March more than you might expect (at least for me). Sycamore is still immensely powerful in Night March, but I just wanted to use N more consistently than I could with only one in the whole deck.

Field Blower is absolutely critical in two of the big three matchups. Obviously, it is great for getting rid of Garbotoxin and Parallel City against Drampa / Garb, but it’s also nice to be able to remove Focus Sash from Fighting-types. That’s all, really.

To be completely honest, this probably should be Dowsing Machine, but I can’t bring myself to do it just yet. I like Computer Search to maximize early game explosiveness.