Hey PokeBeach readers, I know it’s been a while since I’ve written. The last time I wrote, it was before Dallas Regionals, where I was testing a Gardevoir-GX list in Expanded for that tournament. I made a Top 32 finish in Dallas and have since been confident with Gardevoir-GX. I was incredibly excited to see that my upcoming cups here in Nebraska were going to be in the Expanded format. My list has evolved quite a bit with the lessons I learned in Dallas as well as through some further testing, and I believe that Gardevoir-GX is an incredible play for Salt Lake City. The Expanded format has evolved to something slightly different compared to Dallas, and I believe a revisit on the topic of Gardevoir should happen. 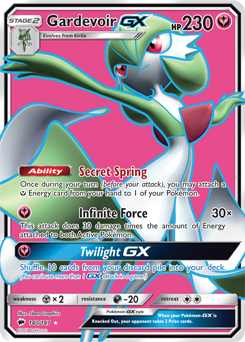 There’s different solid decks in Expanded since the release of Ultra Prism. The set didn’t add too much to Expanded, but the format shifted based on the results in Dallas and in Costa Mesa. As such, my list has changed a bit since Dallas, and there are new decks to tech and develop strategies against. To the dismay of some and joy of others, Zoroark-GX is still around. Its impact is still felt and can surely even give a powerful deck like Gardevoir a run for its money. I want to go over my current list and also go over strategies that Zoroark-GX decks use to beat you. But first, I will go over my assessment of the Expanded metagame.

I think that the biggest surprise to everyone was that Zoroark didn’t win. The clear favorite and best deck in format Zoroark-GX / Exeggcute with an Exeggutor tech lost to Drampa-GX / Garbodor a deck that was made popular by some of the better players in the game in Dallas. The deck has major power against Zoroark-GX decks but is hard to pilot well and isn’t as consistent as Zoroark decks are. This made it still fairly unpopular for Costa Mesa, however its popularity boomed after it took a Regionals win.

In no particular order, these are what I feel to be the best decks in Expanded.

The format is really diverse. There are other decks that I left off here such as Gyarados / Gallade, Sableye / Garbodor, and Glaceon-GX / Barbaracle. The Regionals in Stuttgart even had a Donphan deck make it into the Top 16. There are clearly other decks in the format that are powerful, but the five I listed above are going to be by far the most popular decks. This list is so much different and diverse than my list that I made back in January.

Zoroark-GX decks are still popular; however, the meta has become a little more diverse as players try to counter Zoroark-GX decks. I foresaw Night March being edged out of the format, even though some players have had some success with it. Zoroark-GX just does what Night March did much better in regards to taking OHKOs, as well as chaining Hex Maniac. Zoroark-GX also just doesn’t care that much about Oricorio. 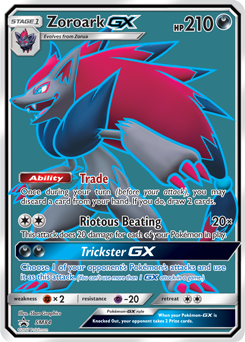 Most of the fringe Zoroark-GX variants got edged out by the superior Zoroark-GX / Lycanroc-GX and Zoroark-GX / Exeggcute variants. These two are clearly a step above the other ones that players were testing for Dallas, and recent results in Costa Mesa and Germany prove that. Garbodor’s stock rose as a result of Zoroark-GX’s success. I was surprised to see Seismitoad-EX make an appearance once again in Expanded as well. The disruption of Seismitoad-EX and Drampa-GX combined with Garbodor does an excellent job at stymieing Zoroark-GX’s power.

Let’s go over how Gardevoir still beats non-Zoroark-GX decks in the meta, and how it still should be a solid play for Salt Lake City.

Evolution: My Deck Changes Since Dallas

I’ll include my Dallas list to help refresh everyone’s memory. I know that one of our own writers, Ryan Allred is a huge fan of Gardevoir-GX in Expanded, and his style of building the deck is a lot different than mine. My Dallas list was modified recently, but still retains the style that my original list had, based on Connor Lavelle‘s list. So I’m not too original, but these lists were modified heavily from the originals. So here’s my Dallas list.

This list is still solid. It netted me a 7-2 finish day one with an abysmal 2-3 performance day two. I think I drew worse during my day two games than any of the 150+ games I’ve tested with this list.

Normally I try to play something fairly established, in which case, I would’ve played a Zoroark-GX variant for this tournament. However, mirror matches are a thing, so I was willing to test a more fringe deck a ton of times. Plus I also had success with the deck before Zoroark-GX came out, winning a League Cup with it.

Most would say that your worst matchup is Night March, but I strongly disagree with that. I went into detail in my last article on how to handle that matchup, so be sure to check that out. Anyway, I’ll bring the conversation back to my list here which changed after some more testing and seeing what other successful players played.