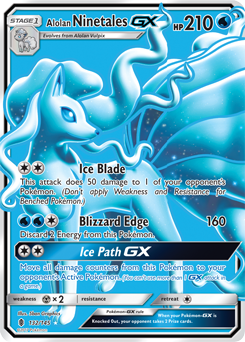 Hi PokeBeach! Do you see the DeLorean? Because I sure see the Doc, as I’m slowly realizing we’re going back to the ol’ Standard grindstone — the Standard format as we know is reverting back to something we’ve seen before: Gardevoir-GX is re-appearing, as well as Espeon-GX / Garbodor. Decks like Golisopod-GX are still prominent, and we have two new players in the current format in the form of Lucario-GX and Zoroark-GX. This weird spot in the game right now is a perfect time for a player to apply their previous knowledge and master the top tables. Upon further inspection, I’ve done my research on what did well during that time frame, and one of the more under-explored decks came up in my archives was Alolan Ninetales-GX. Alolan Ninetales-GX is a deck that’s never been notoriously Tier 1, but it’s always been on the cusp of greatness. It seems like it was on the come-up when Michael Pramawat stormed in and took first place at a League Cup playing this deck — he had a unique innovation however that took it over the top: Po Town. Po Town was played in an effort to take down the Evolution decks that were cropping up in his area, but now the deck has evolved into something much more. Now that Zoroark-GX has emerged as a popular attacker, the format has shifted into a 2HKO game. Alolan Ninetales-GX is able to capitalize on this with its brute strength as an attacker, as well as its healing GX attack, Ice Path-GX. Let’s have a peek at the list I’ve been working on!

The last time I touched this list, it included a copy of Tapu Fini-GX, four copies of N, and there was an additional Tapu Koko. I’ve dropped these cards in favor of additional consistency, in the form of the format’s newest draw Supporter, Cynthia. Alongside that, Tapu Fini-GX isn’t as necessary in testing because there aren’t many things that momentously tackle our deck down — the closest thing to a snowballing threat would be a Gardevoir-GX with tons of Energy, but we can take that down with some careful planning and some spread damage. If you find Gardevoir-GX is giving you a hassle, you can always try to throw the Tapu Fini-GX back in, but I find that usually another Gardevoir-GX follows up the first one. I cut down on the Tapu Koko line because I felt that once you get off one Flying Flip, your numbers for the rest of the game are all setup; we really only include two copies just in case you prize one of them. Let’s dive into some of the card counts, and talk about the key players in this deck!

Our main attacker, Alolan Ninetales-GX, is a Water-type GX Pokemon with a hefty 210 HP. For a Stage 1, that’s actually a very high amount of HP! This makes it relatively difficult for a lot of Pokemon to OHKO it, barring the obvious Gardevoir-GX. It has Weakness to Metal-type Pokemon, so we’re namely looking at Solgaleo-GX and Dusk Mane Necrozma-GX (which would normally OHKO any GX Pokemon anyways). This Weakness is fine as Metal-type Pokemon aren’t exactly prevailing in high number right now, and if they are, Volcanion-EX and Fire-type friends are more than likely going to overshadow our steel enemies. We have a Retreat cost of one, which is fine as well. Overall, the stats on this card are superb!

Alolan Ninetales-GX is such a violent and versatile attacker, with several options. Upon the gauntlet of attacks, we have Ice Blade, a simple 50 damage snipe for a Double Colorless Energy attachment. This is a great attack to prepare Pokemon for future KOs, as well as setup cute devolution plays with Espeon-EX. Sometimes, I’ll sacrifice my first Alolan Ninetales-GX in order to repetitively use Ice Blade to setup key knockouts throughout the game. This isn’t our main attack, but it sure packs a punch for an efficient single Energy attachment!

The second attack we have is the main attraction of the deck — Blizzard Edge! Blizzard Edge has a rather unusual damage output of 160. I can’t really name off any Pokemon in my memory that have that number printed on their card, but that just makes Alolan Ninetales-GX all the more unique! The number may be odd, but the math works: with the addition of Choice Band, as well as any previous damage from Po Town and Flying Flip, this number can range anywhere from 160 – 260! With one Po Town effect, a Flying Flip, a Choice Band, and a Blizzard Edge, we can effectively KO a Gardevoir-GX. This attack’s drawback? We have to discard two Energy from Alolan Ninetales-GX. In order to cope with this cost, we’ll more than likely be discarding a Double Colorless Energy to pay for it; this makes it easier to stream multiple Blizzard Edges. What a beast of an attack! 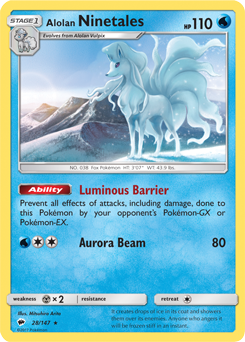 Other than that, one of my favourite GX attacks of all time is printed on this card — Ice Path GX. Ice Path GX is very reminiscent of Mewtwo-EX‘s Damage Swap from earlier last season and we all know how effective that was! Being able to heal all damage off of Alolan Ninetales-GX is insane when coupled with the ability to damage our opponent’s active simultaneously. Consider this GX attack a cherry on top of our otherwise mile-high sundae. Bon appetite!

Quad Hoopa is a deck that’s been running around lately due to the absence of cards like Hex Maniac in the Standard format. Alolan Ninetales offers us the option of having a Safeguard Pokemon in our deck that can not only attack, but buy us time while we power up more Alolan Ninetales-GX on the Bench. Sometimes, I’ll keep an open Alolan Vulpix on the Bench without evolving it in order to consistently threaten an Alolan Ninetales reaching the field. If the opponent doesn’t play a non-GX/EX Pokemon, they’ll lose the game! Sometimes, unique game states can occur where if you isolate and KO your opponent’s only non-EX/GX Pokemon, you can win the game with a lone Alolan Ninetales. If you do opt to go this route however, be wary not to bench too many Pokemon! You don’t want your opponent to be able to Guzma around your Safeguarder and win the game through alternate means.

Alolan Vulpix marked the reintroduction of the era of starter Pokemon — back in the day, Pokemon such as Pachirisu and Cleffa were the optimal starter of choice because they aided in setting up your deck. Nowadays, we can play four copies of Alolan Vulpix as not just our starter, but also the pre-evolution to our main attacker! Usually what I’ll do is begin my first turn setup with a Brigette, and then attach to my benched Vulpix. Then, I’ll use Beacon with an active Vulpix (since Beacon requires no energy), and begin to setup my field on the Bench. If I ever need to attack with the active Vulpix by evolving into a Ninetales, I’ll simply attach a Double Colorless and setup KOs in the future with Ice Blade, followed up by healing the active off with Ice Path GX. This way, your Pokemon are not only sustainable, but also offensive. No hand is truly ever dead with Alolan Vulpix as your starter – you can simply Beacon for Tapu Lele-GX and use Wonder Tag to burrow your way out!