Hey there PokeBeach readers, and welcome back to another article. Today, I’ll be talking about a card that was just released, but has the potential to completely dominate our format: Lucario-GX. This is a card that you absolutely need to be on the lookout for when preparing for tournaments after Portland Regionals, as this card is incredibly strong and matches up well against many of the Zoroark decks in the format. In this article, I’ll be taking a look at three different Lucario lists that I’ve been working on: one with Lycanroc-GX, one with Super Scoop Up, and one with both. Then, I will briefly discuss the deck’s matchups.

Before we talk about my Lucario lists, let’s first take a look at Lucario-GX and what it does for those who do not know yet. Lucario-GX’s first attack, Aura Strike, is the bread and butter attack of the card, and the attack you’ll use most often. Being able to hit for 120 damage for one Energy is incredibly strong, especially considering damage modifiers like Regirock-EX and Choice Band. With these damage modifiers, Lucario can easily hit 170-180 damage for a single Energy, which is enough to Knock Out cards such as Tapu Lele-GX in one hit.

Cyclone Kick, which is by no means a bad attack, you probably will not use it often due to the three-Energy requirement.

Finally, Lucario has Cantankerous Beatdown. This GX attack has the exact same effect as Tauros-GX‘s GX attack, except it can now be used to hit things for Weakness. Now, if your opponents ever attack into Lucario, they risk being one-shot in return. This attack forces your opponent to have to one-shot Lucario or otherwise lose a Pokemon in retaliation. Cantankerous Beatdown is by far one of the best attributes of the card and one that you, nor your opponent unless they want to lose, should overlook.

It may seem strange to you that I’m not instantly pairing Lucario up with Zoroark-GX to match up with every other deck in the format, but I’ve decided that I don’t want to have any part of my deck weak to Lucario. That’s how strong I think Lucario is, and it is a testament to its strength in testing. Since I don’t play Zoroark, I’ve chosen what I believe is the second most consistent deck engine in the game: Brooklet Hill and a 2-2 Octillery line. Lucario benefits from Brooklet Hill as well, making this deck engine even stronger.

This is the backbone of the deck. A fourth Lucario would be nice to guarantee your evolution, but with two Acerola and a Rescue Stretcher I’ve had access to enough evolutions to be comfortable at three.

2-2 Octillery is great for ensuring you constantly have draw power from turn two on. One benefit to Octillery is that it only gives up one Prize if it is Knocked Out, unlike Zoroark-GX.

I would not cut any of these Pokemon, and I consider them essential to the deck and how it functions. 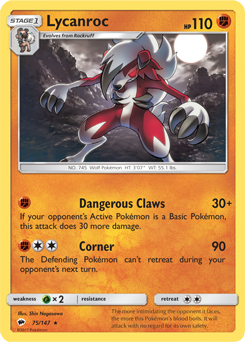 I’ve highly considered a 2-2/1 line of Lycanroc and dropping the fourth Guzma, but for now, this is what I’m running. Lycanroc is great not only for its Ability, but also for its GX attack. If your opponent plays around Cantankerous Beatdown, you can always Dangerous Rogue and Knock Out any immediate threat if they don’t control their Bench. The baby Lycanroc is to deal with quad Hoopa decks; it can one-shot a Hoopa for one Energy. No one likes losing to cheesy decks, so if you have quad Hoopa in your metagame or don’t want to lose to it at Regionals, play this Lycanroc. If not, you can always take this card out for a second Lycanroc-GX, a fourth N, or a fourth Brooklet Hill.

Regirock-EX is important in this deck to hit numbers that you otherwise would not be able to hit. With a Strong Energy and Choice Band, Lucario hits for 170 damage. With one Regirock in play, Lucario hits for 180 damage, which is enough to Knock Out Pokemon such as Tapu Bulu-GX and Volcanion-EX. With two Regirock in play, Lucario can one-shot Pokemon with 190 HP such as Buzzwole-GX. Finally, with Professor Kukui, you can hit for all the way up to 210 damage and Knock Out Pokemon like Golisopod-GX and Espeon-GX for just a single Energy. You can also deal 230 if you have a second Strong Energy, which is enough to Knock Out even Gardevoir-GX.

While other Fighting decks such as Buzzwole-GX / Lycanroc-GX usually play only one Tapu Lele-GX, I’ve chosen to run two. This is due to the importance of hitting the correct Supporter the turns you need them, including but not limited to Acerola and Professor Kukui. As such, I thought it was important to run more than one Lele so I could have access to these Supporters on demand more than once.