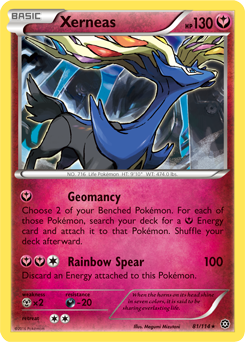 Hello everyone! This is Grant here. For what feels like the first time ever, I originally had no idea what to write about for this article! I will have another article soon covering some Expanded plays for Dallas, so that left me to cover Standard decks. I did not want to write two Expanded articles so close together because that would likely be repetitive! Luckily, I have been playing a bit of Standard recently for fun even though my main focus has been on Dallas. I still have Standard League Cups to prepare for after all!

As it happens, I think two particular Fairy decks are the two best plays for this format, at least before the extremely hyped Metal set comes out. Fairies may not be in too great of a spot after that. In the meantime, though, I have some fun, effective, and unique Fairy lists to show you, as well as a quirky surprise at the end!

Everyone thinks that Gardevoir-GX doesn’t exist in Standard anymore. Compared to its overwhelming popularity before, it sure isn’t as dominant, but the deck is still just fine! It definitely holds its own against the various Zoroark-GX decks out there, and it is still extremely powerful and bulky at the cost of a little clunkiness. I figured that Gardevoir should be favored to beat all of the top decks provided it can set up. After all, not much can deal with two Gardevoir each loaded with Energy. Therefore, I set out to make the most consistent Gardevoir list possible. Unfortunately, it is still somewhat clunky, but the positive difference between past Gardevoir variants is noticeable.

In a nutshell, this list is slightly more consistent than normal and relies on Gardevoir’s largely positive matchup spread.

As you can see, basically every card is run in high counts and the list is focused on consistently setting up Gardevoir. No time for weak cards like Field Blower and Parallel City! I would also rather obliterate my opponents with Infinite Force than cripple my own consistency with situational healing cards. Max Potion and Acerola also set you a couple turns back when you can just take two more Prizes and let the Gardevoir go down. In case I haven’t said so enough, this list aims to be consistent over anything else!

There is one Gallade. Gallade is somewhat extra because Gardevoir can already OHKO Zoroark, but Gallade has a much easier time doing so. Gallade also cannot be return KO’d by Riotous Beating, making it a low-Energy nightmare for Zoroark. However, the main reason Gallade earns his keep is because Premonition with Octillery is so strong it’s unfair! It’s almost as good as the Mallow plus Trade combo, and it doesn’t even use up a Supporter!

A 1-1 line is way too risky because of the odds of a piece being prized or Knocked Out. 2-2 is the way to go for optimal consistency!

I thought Zoroark-GX would be a better partner for many reasons, so I tried him out, too. Turns out, Zoroark sucks. I also run 2-2 for that juicy combo with Gallade I was talking about — Octillery needs to be in play for that to happen!

You may be thinking that two Tapu Lele-GX is a little low for a list that’s supposed to be focused on consistency. You would be absolutely correct! I would love a third Lele, but it is the honorary 61st card at the moment. I couldn’t convince myself to cut anything for it, so I am trying to sneak by with two. If you really want to add a third, I suppose you’d have to cut the second Alolan Vulpix.

Two of these adorable arctic foxes may seem a bit greedy, but the gameplan is to use Beacon early game and every game. I wouldn’t want to have my heart broken by my only copy being prized, and having it in your opening hand is absolutely lovely. However, if you wanted to take the risk and go down to one, I wouldn’t blame you. The second Vulpix is the deck’s most flexible spot.

This list runs a ton of Pokemon and basic Energy, and double Super Rod allows you to blaze through Sycamores with minimal repercussions. Who wants to waste a turn using Twilight GX, anyway?

Nine might seem like a lot, but that’s okay. You always want to have an Energy in your opening hand so you can retreat into Vulpix. Additionally, you always want multiple Energy later so you can load up Gardevoir. I wouldn’t even mind 10 Fairy Energy but space does not allow for it.