Hello Beachers! Since this is my first article here, I should give a brief introduction. My name is Ryan Allred, and I am currently tied for #13 in North America by Championship Points. This year I finished Top 32 at the last four Regionals in a row, narrowly missing Top 16 with one 18th and two 17th place finishes. I am currently at 440 Championship Points for the season, already netting me my invite to the World Championships in Nashville. My goal is to maintain my place in the Top 16 for North America and ride the wave to a day two invite for the World Championships.

In this article I will be covering two decks focused around one card — Gardevoir-GX. First I will go over the Expanded version of the deck which I piloted to a 17th place finish at the San Jose Regionals. Then I will cover the Standard version of the deck with adjustments for the post European Internationals metagame. Gardevoir-GX is an absolute beast with a whopping 230 HP, Energy acceleration built in with its Secret Spring Ability, a nearly unlimited damage cap with its Infinite Force attack, and a cure for resource management with its Twilight-GX attack. It feels like the designers at Pokemon combined the most powerful mechanics from separate cards and put them  all into one.

The Expanded metagame adds a host of new threats for Gardevoir-GX but also adds a few key tools. The number one tool gained is Teammates. Expanded is substantially more fast-paced than Standard, which requires Gardevoir to be a more aggressive deck. It is usually expected for your opponent to take a Knock Out before your second turn. In response, Teammates will usually grab two of the puzzle pieces needed to responded with a Gallade, or even a powered up Gardevoir-GX. Against a deck like Zoroark-GX your Teammates will usually be used to obtain either Gallade, Rare Candy or Double Colorless Energy. If you have a Ralts in play, these are the only three components needed to attack with a Gallade.

One other big addition to the deck is Shaymin-EX. While Shaymin-EX has lost most of its appeal in the metagame, it is a powerful tool in this deck. Gardevoir-GX and Gallade are both Stage 2 Pokemon, which means that they will be brought into play using Rare Candy a majority of the time. Rare Candy is what is known as a “combo card” since it requires a combination of cards to be in your hand at the same time. You may get lucky and draw into both together, and any Energy you need for the Knock Out, but in many cases a critical Knock Out can be just out of your reach. There is no denying that Shaymin can be a liability, but when you need just one more Energy to take a Knock Out, the advantages usually outweigh the risks.

Okay, But How Do I Beat Night March? 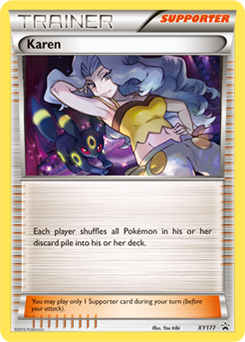 San Jose showed that Night March is always going to be a threat in Expanded. Since this deck relies primarily on two-Prize attackers, it has a natural weakness to Night March. There are two main approaches decks use to counter Night March: Oricorio and Karen. On its own, Karen does very little to stop Night March, so it is usually only effective when combined with Seismitoad-EX. For this tournament, I went the route of Karen and Seismitoad-EX. My reasoning was the Seismitoad has utility in other matchups, primarily Sableye / Garbodor. If I were to play the tournament again, knowing that Sableye was not a threat, I likely would have played Oricorio instead, countering Night March with one card instead of two. In place of Karen, either Ghetsis or Hex Maniac would have been good additions that help against Night March while also finding utility in almost every matchup.

Comfey was included in the deck primarily for the Seismitoad-EX / Seviper matchup. Without Comfey, the matchup is extremely poor. On the reverse side of that, the matchup is exceptionally easy with Comfey included. Preventing Poison damage leaves Seismitoad-EX with a low damage cap that Gardevoir-GX far exceeds with minimal effort. Sableye / Garbodor was another matchup where Comfey can provide key support. Against Sableye / Garbodor, my strategy is to attack with Seismitoad, using Secret Spring to attach enough energy that Sableye cannot break out of Item-lock, rendering their deck useless. Unfortunately, Sableye has a first attack, Confuse Ray, which can leave Seismitoad-EX confused. Flipping tails for Confusion even once would mean Sableye breaking out of the Item-lock and wreaking havoc. Comfey ensures that Seismitoad-EX is not Confused, rendering that strategy useless. Comfey can also be helpful against Darkrai-GX, ensuring that they can never get a crucial OHKO with Dead End-GX.

Unfortunately, I did not have a single instance in San Jose where my Pokemon would be affected by a Special Condition, so Comfey remained a wasted slot. Moving forward, I would replace Comfey with a more useful inclusion.

Ghetsis is a powerful tool in Expanded, known mostly for its potentially devastating effect turn one; however, in this deck, I would not attempt to play Ghetsis turn one. Its real value comes later in the game when it can be used to ensure your opponent does not have a VS Seeker or Puzzle of Time in hand. Late game, there are frequently situations where a Guzma or Lysandre can be devastating (or game ending) if your opponent plays it. If you see that the card is already in your opponent’s discard, Ghetsis can be played to ensure your opponent cannot use any Item cards such as VS Seeker or Puzzle of Time to retrieve that card from the discard. Unless they happen to draw the VS Seeker off the top of their deck, you can control your opponent’s next turn. Having the knowledge of your opponent’s hand also allows you to plan more perfectly around their capabilities.

Ghetsis has another perk with the rise of Zoroark-GX. The combination of Exeggcute and Zoroark-GX means your opponent can draw two cards per Zoroark-GX per turn. This leads to your opponent holding truly massive hands. A Ghetsis in that situation can be more powerful than playing Colress to draw 10 cards, and has the added benefit of disrupting your opponent.

Early game setup is vital to this deck’s success. That generally means getting Octillery and as many Ralts into play as quickly as possible. Level Ball allows you to search out Ralts, Kirlia, Remoraid, Octillery or Alolan Vulpix. There are very few moments in any game where you do not want at least one of those Pokemon in your hand. If you draw into Level Ball on the first turn, it is likely going to be used for either Ralts, Remoraid or Alolan Vulpix. Past that, Octillery is the primary target. Once Octillery is in play, Level Ball is still extremely helpful to put a Kirlia into play, or another Ralts.