This format will be similar to Daytona; however, a new mini set will be legal: Shining Legends. Crimson Invasion will also be joining it, and will be bringing with it a few game changing cards as well. I unfortunately haven’t had any League Cups this week, but I have been helping friends test for San Jose, and have been running some gauntlets with various decks against them. Soon I will be preparing for Memphis, which is Standard. That time is a little ways off, so I’m enjoying casually helping friends test for now.

I’ve been keeping an eye on Japan. Like I mentioned before in my previous articles, results in Japan can tell us how good new cards are before they’re released in the west. Given that their format starts at XY, though, these results should be taken with a grain of salt.

One of the decks that I’ve been enjoying playing is Zoroark-GX / Lycanroc-GX, an aggressive deck based around Shining Legends’ star card. Zoroark-GX has an incredible Ability, and an even better attack. Lycanroc-GX pairs incredibly well with the fox to make an aggressive deck that puts big damage down fast and wherever it wants. This deck had a huge following and put up great results in Japan, and is going to see some play in San Jose, no doubt.

I’ve been testing it against my friends and they have been testing it themselves. Of course, Garbodor decks will still kill it in San Jose, Gardevoir-GX is insane, and Golisopod-GX is still a good play. The other decks that we’re familiar with, such as Night March and Turtonator-GX, will appear, but I foresee Zoroark-GX decks splashing into the metagame.

Dark Patch, Max Elixir, Yveltal, who cares how much Energy the attack costs? Dark has so much support going for it, and Turbo Darkrai-GX isn’t going anywhere at all. Guzzlord-GX may see some play in these decks. As a Basic GX with 210 HP and an attack that does a flat 180, it’s hard to count this attacker out. You just have to watch out for a big Energy Drive from Tapu Lele-GX.

The GX attack is arguably the main focus of this card. The first attack Turbo Darkrai uses is usually not an OHKO, so Guzzlord-GX can swoop in and finish off that Pokemon. It’s even great for Knocking Out a single Prize attacker and taking three Prizes in one attack. Can you imagine going up three prizes against Night March on turn three or four after just Knocking Out a Pumpkaboo?

Silvally-GX has a solid Ability for a Stage 1. The attack hitting for 120 is respectable as well. I’m unsure if Silvally can survive on its own. It needs that extra oomph, a Pokemon that can benefit from its power-up attack and its free retreating Ability. Some of my favorite partners incldue Metagross-GX, Seismitoad-EX, and Volcanion-EX and Turtonator-GX. Silvally-GX has excellent, HP, typing, and a good Ability, and will probably see some play with another attacker. 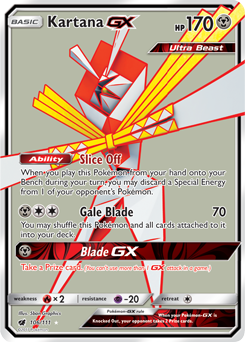 Kartana-GX is my favorite card from this set. It’s splashable in any deck that needs to curb some aggression, and it’s especially splashable in decks that run Rainbow Energy or Metal Energy.

It holds Zoroark-GX somewhat in check. In addition to that, it can keep Drampa-GX from Berserking if they start with a Double Colorless Energy attachment. This Ability works through Item lock too, so it works through Seismitoad-EX’s Quaking Punch unlike Enhanced Hammer.

Some believe this card should live as a one-of in every deck, but Prize cards don’t affect every deck the same way. Night March may make a spot for this card, since prizing Puzzle of Time and Night Marchers can be detrimental. Other than that, I don’t see this having a spot in a lot of decks. Most decks in Expanded run redundant amounts of cards to account for cards in the Prizes anyway.

Man it’s good to be back! Warp Energy enters the format among many other cards that help Pokemon stay mobile, such as Darkrai-EX, Guzma and Float Stone, but it works outside of Item lock and Ability lock. It also doesn’t require a Supporter to play. If Trevenant makes a huge return, this might see some play.