Hello readers! I hope you are enjoying our new article structure as much as I am. Writing articles more frequently means I can more freely focus on multiple tournaments or put more emphasis on a single format.

To start us off on this new structure, I will be writing a two-part series focusing on my testing for San Jose Regionals. My testing focus for Expanded has revolved around manipulating the Prize trade. I’m having fun experimenting with the Prize-manipulating GX moves sported by the new Ultra Beast. Since Prize cards are the primary win condition, these GX moves have enormous potential and can create complex game states for both players to maneuver around. In this article, I analyze one of the most underrated cards in this set: Guzzlord-GX. This gluttonous Pokemon is for the greedy player, allowing you to over extend and take a giant leap in the Prize race.

In the first part of this article, I want to show off one of the more bizarre decks I’ve been working on. Throughout my testing, I come up with a lot of ideas that sound great on paper, but are either incredibly inconsistent or just too easy to play around. Hopefully you enjoy reading about an unorthodox list for a change. Because this is much different than what I usually write, please make sure to give feedback!

Something Old and Something Mew Box

My favorite card of the new set, Guzzlord-GX, is extremely fun to play with; I wish this deck could be as competitive as I wanted it to be. Aromatisse / Guzzlord-GX / Shining Mew / Mew is a hilariously fun combination that wins games in a glorious fashion when you can pull it off. This deck’s greatest strength is its absurdity and adaptability. Your opponent won’t know what’s going on the first time when they’ve only got their one Prize to your four, and suddenly you steal the game from under them. 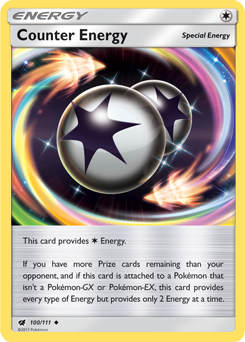 The stars of the show are Mew and Counter Energy. Counter Energy’s requirement of a non-EX/GX Pokemon is circumvented by using Mew as your attacker so that you can use the incredible attacks on basic EX and GX Pokemon at a low cost. When paired with strong Basic Pokemon and Aromatisse to move Energy around, you create an unstoppable board state.

The strategy is overall pretty simple, but it requires a lot of moving pieces and for your opponent to play along. Your ideal first turn after winning the flip is that you get an attachment, a Spritzee, and a Regirock on the Bench, which is facilitated by Pokemon’s new bread and butter: Brigette and Tapu Lele-GX. If you’re going second, you’ll want nearly the same set up, but you’ll also want to have a way to attack with Shining Mew. That is why I included five Pokemon that have zero Retreat Cost in the deck to optimize your chances of achieving a turn one Legendary Guidance. Your preferred target for Legendary Guidance is Regirock as it is immune to Energy denial and Trainer-based gust effects with its Omega Barrier Ancient Trait.

Your next turns are about setting up Aromatisse and setting up knock outs. From here, you just try to stay behind in Prizes until you can pull off using Glutton-GX with any combination of Rainbow Energy, Counter Energy, and Prism Energy to close out the game. When playing this deck, I like to let my opponent take three Prizes before I take one. This deficit lets me take the game in two knockouts on two Pokemon-EX / Pokemon-GX.

The Basic Pokemon I chose to accompany this strategy are split between locking your opponent and taking easy Prize cards. Giratina-EX and Jolteon-EX are used to stop decks like Night March and Volcanion-EX / Turtonator-GX that are typically too fast to deal with otherwise. Shining Rayquaza, Sudowoodo, Drampa-GX, and Guzzlord-GX are there so that you can respond with force if you have the adequate Energy in play.

Other Pokemon I considered using are Buzzwole-GX, Malamar-EX, and Seismitoad-EX. Buzzwole-GX’s Jet Punch is synergistic with Glutton-GX as it can put 180 HP EX/GX Pokemon down to 150 HP. This damage puts them in range of Glutton-GX plus Choice Band plus Professor Kukui. Seismitoad-EX and Malamar-EX have been combined with Aromatisse since Malamar-EX was printed in Phantom Forces. Locking your opponent out of Items and giving them only a 50% chance of attacking is an oppressive strategy that won many City Championships in its day.

The Trainer cards that I picked are in response to how the meta is shaping up. The utility of Ninja Boy in toolbox decks like this one is unparalleled, especially if your opponent has limited your Bench with Sudowoodo or Parallel City. It’s good if you also want to draw out the game by getting rid of two-Prize liabilities on the board.

My decision of running Choice Band over Muscle Band was won by the importance it has in the Volcanion-EX matchup. Sudowoodo cannot OHKO a Turtonator-GX or a Ho-Oh-GX with a Muscle Band when copying their attacks. Muscle Band is better against decks that have 120/110 HP Non-EX’s to give Mew FCO a chance to take three unexpected Prizes. I felt a single copy of Professor Kukui over a third Choice Band was a great compromise to this dilemma.

That deck was my first idea when Crimson Invasion came out and I tested it heavily. I put so much effort into it because I believe Glutton-GX is an absolutely underrated attack in this format. The five Energy cost is steep, but if you pair it with a deck that can put out Energy at such a fast rate, it won’t seem like too much of a burden. Guzzlord-GX in Turbo Dark in place of the cards reserved for Darkrai-GX creates a new deck that has a similar aggressive feel to it, but has a completely different means to an end. I actually felt like slowing the deck down helped quite a lot, because you can afford to be behind on the Prize race a little bit, as long as you are able to take a decisive KO with Glutton-GX. The list below was forged by weeks of testing and I believe it is stronger and more dominant than the Darkrai-GX-focused lists.