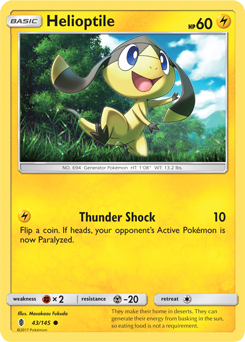 Good day lads! We’re just around the corner from one of the biggest tournaments in the 2017-2018 season: the European International Championships! This is an exciting time for many, as there are tons of players that are surely mustering up information to get a passport, obtain their visa’s, and of course choose which deck they’re going to play. I remember last year it was my first time travelling by myself via air, and it was one Helioptile of a trip. Whether it was the English culture, the delicious food, or just the kind locals, there’s something there for just about everybody. But besides sight-seeing and going to snap a selfie with Big Ben, there are more important things at stake than a simple vacation: $10,000 to be exact, as well as priceless CP.

Since the metagame is going to be underdeveloped, rather than discuss the new cards that are emerging from the upcoming expansions like many of the other writers on PokeBeach, I’d like to go over how to correctly play the game to its fullest. I’m talking specifically about psychology today — what it is, how it can affect your game, as well as all the nooks and crannies you’d like to know about to up your game.

There are a crazy amount of things we can discuss in psychology — whether we’re discussing famous psychologists, such as Sigmund Freud, or Carl Jung, their teachings can parallel to how we play Pokemon.

Let’s talk about one of my favorite psychologists, Ivan Pavlov. Ivan used to experiment on animals in order to study what’s known as “conditioning” — the act of training the mind to have reactions to specific stimuli. What Ivan would do is ring a bell every time his specimen would eat, so eventually the specimen would associate the bell (stimulus) with the eating of food (response). He would do this to the point where without even bringing food, the specimen would come forward whenever the bell rang. This became known as Pavlovian theory.

So how does this apply to Pokemon? In an effort to train myself for the 2017 World Championships, I took this theory to the next step — I decided to test this theory on myself. I frequently found myself misplaying on very small level errors of sequencing, such as attaching an Energy before playing an Ultra Ball. The reason why this is a misplay is because you’d want to play the Ultra Ball first in order to learn what’s in your deck; by having knowledge of the deck, you have more information to deem whether attaching Energy is the correct play or not. We’ll go into sequencing a little later on in the article, but for now that’s all you need to know! Essentially, whenever I misplayed on a micro or macro level, pending on the severity, I would snap an elastic band onto my wrist. This conditioning associated “misplays” with “pain,” and created a negative memory of the stimulus (the elastic). By using this extreme process, I was able to correct many of these misplays, and get steps closer to becoming a “perfect player.”

Psychology in Pokemon refers to how you can use certain body movements and phrases to position an idea within your opponent’s mind. This can be demonstrated in many ways, and while it isn’t essential to win, most top players will use it from time to time. The key to psychology is to make your actions as genuine as possible, while also being able to maintain a stable train of thought. I believe that N is the most misplayed card in the entire game, and being able to have a keen eye on your opponent will tell if you can capitalize on their dead draws. There have been several times during a tournament where I have had my opponent accidentally flash their hand to me, and I quickly notice there are no relevant draw cards in their hand whatsoever. As opposed to playing the N, even in some situations when it’s risky, I’ll often opt to play Professor Sycamore (or use Tapu Lele-GX to search out a Professor Sycamore).

Likewise, it’s just as easy for your opponent to abuse the same psychological merit against you. Player A may potentially “fake” a dead hand in order to hold onto certain cards. Or perhaps they may fake holding a “perfect” hand, while in reality their hand is trash, in order to convince Player B to play an N, refreshing Player A’s hand in the process. The same principle can be applied to the use of cards like Red Card – you can usually gauge your opponent’s hand just by reading simple body language. Most opponents you face will be too focused on their own strategies to worry about psychology, and will fall to simple body reads. 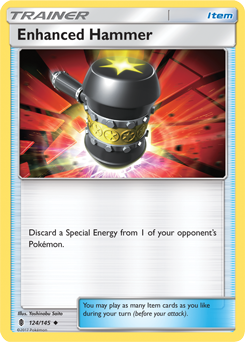 Enhanced Hammer is another example of a card that heavily influences how we play the game. We play in a Standard metagame that is embodied by Special Energy, mainly Double Colorless Energy, Splash Energy, and Rainbow Energy to say the least. Enhanced Hammer reinforces fear in the hearts of those players, but what if we could withhold the surprise for a little bit? Allow me to explain — in a best-of-three format, you’re going to be playing two to three games most of the time and, depending on the matchup, your first game might be an easy one. When you’re facing an extremely steep lead, you may want to consider concealing your Enhanced Hammer instead of playing it to have a bigger surprise factor in the second game. By doing this, you drastically increase your chances of catching your opponent off guard, and can aid in pulling off an otherwise unforeseeable victory.

In every card game, there’s always ways to gain leverage versus your opponent, whether they’re a lazy opponent or a nimble one. Below, we’ll dwell into several things your opponent might do throughout the course of the game that will stack up in your favour!

Your opponent will sometimes eagerly extend their hand to show you what they’re discarding with Professor Sycamore; take advantage of this! These players will tend to be “sloppier” and will reveal info that is otherwise unnecessary to show you. Likewise, never show your opponent what you’re discarding with your own Professor Sycamore; even if it’s all of your Rescue Stretcher and Double Colorless, they may never check your discard and will play normally as if these were never discarded.