Hello PokeBeach readers! I am here with part two of my San Jose Regionals preparation. To continue my theme of manipulating the Prize-trade, I have two spicy plays for you to consider: Metal Mew and Gyarados. Both of these decks are not only fun and challenging to play, but they are also incredibly powerful and poised to take the win in the forecasted Expanded meta. This time, instead of overextending with Guzzlord-GX’s Greedy Glutton-GX attack that closes out games in a few turns, I have engineered a deck that focuses on one Prize attackers with the ability to OHKO anything in the meta.

The first deck I want to discuss is Metal Mew. I came up with this idea around the same time I came up with the Aromatisse idea as I was searching for partners for Mew and Counter Energy. The more I played with the list, the less I liked Counter Energy because this deck doesn’t really stay behind. Counter Energy’s utility in this deck is to take the lead in the early game so that you can disrupt your opponent’s tempo and outspeed your opponent in the Prize-trade. It is also useful in matchups that you would expect to be poor for the deck such as Volcanion-EX or Zoroark-GX / Lycanroc-GX. 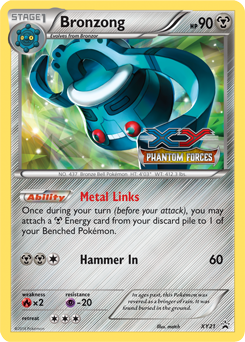 You mostly want to set up as many Bronzong as you can, while also attacking with Mew or Genesect-EX. I’ve included Brigette and two Tapu Lele-GX for the easy turn one set up that lets you take off and deal damage as fast as possible. Bronzong and similar decks typically have a low skill floor when it comes to playing them effectively. The difficulty in this list is knowing when to commit to an OHKO, or when to take it slow. Kartana-GX is a great card for manipulating the pace of the game. At any stage of the game when you find yourself unable to pull off a meaningful attack, Blade-GX lets you race with your opponent for a single Energy. When you pair it with Mew, the risk is extremely minimal as you only lose a single Metal Energy and give up a single Prize.

Genesect-EX is an underrated powerhouse in the meta, that lost a lot of favor when Bronzong rotated out of Standard. Sleeving up this deck immediately reminded me why it was popular in the XY – STS format and it has become even more powerful with Choice Band. When you attack with Rapid Blaster and discard three Energy with a Choice Band attached, you deal 190 damage. Attacking with Mew makes Rapid Blaster even easier because you’re only committing to a one Prize attacker. I’m not really sure why this Mew hasn’t been implemented in the list before. Mew has free Retreat, decreasing your reliance on Float Stone. Counter Energy with Mew facilitates Rapid Blaster’s damage output as you can use it with two other Metal Energy to swing for 180 or 210 with a Band. It also can free up one of your Metal Links to build up a second attacker for the following turn.

The other Pokemon I have added to this list are mostly to balance your bad matchups. Sudowoodo’s Watch and Learn can take powerful attacks, like Riotous Beating on Zoroark-GX and Bright Flame on Turtonator-GX, and throw them right back at your opponent. Bronzong BREAK is mostly for the Joltik matchup. Where Mew might be able to handle Marshadow and win you that Prize-trade, stacking Energy on the Bronzong BREAK lets you take Prizes on the Bench, taking out multiple Joltik / Pumpkaboo or discarding four Energy to close out a Shaymin-EX. When using Metal Rain against Night March, be mindful of Joltik’s Resistance when it is Active.

Bronzong from Fates Collide protects you from threats like Tapu Koko, Oricorio, Necrozma-GX and Trevenant BREAK with its Metal Fortress Ability. Finally, Keldeo-EX with Float Stone is an easy inclusion to string together successive Rapid Blasters on the same Genesect-EX or to pull you out of status conditions.

These Trainers are orthodox for a deck like this, Sky Field allows you to bench many Pokemon, as with these types of decks Bench space is a precious resource. Battle Compressor positions Supporters and Basic Metal Energy to respectively activate VS Seeker and Metal Links. I prefer Choice Band in this deck over Fighting Fury Belt because you want to attack with Mew as much as possible, and the extra 40 HP on a 50 HP Pokemon does not really increase its survivability too much. Dowsing Machine is my Ace Spec of choice because it can search virtually everything we might find useful except for Counter Energy, which is searchable with Teammates and is only situational.