In my time writing for PokeBeach, I’ve enjoyed building a sort of continuity with you guys. By that, I mean ideas carrying over from one article to the next, such as introducing an approach to a new format in one article and then putting that approach to the test in the following article.

Today I’ll be picking up a few threads I started in earlier articles regarding advanced skill sets; understanding the game better. Specifically, we’ll be looking at moments I call “split-second decisions”: choices you make before and during a tournament in a very short period of time that can have a big impact on your success. Their solutions range from good preparation to a better mindset, and those things are precisely what I’d like to help you master in time for your next big event. We’ll look at a wide range of topics, including event preparation, deck choices, distractions in a tournament, and, of course, in-game decisions. That’s a lot of ground to cover in such a short time, but I think you’ll find my solutions to be satisfying and explanations to be clear.

Now that we know why split-second decisions matter at all in a game like Pokemon, let’s dig into the major split-second decisions that the best players find themselves facing, and how I’ve seen them handle those problems. While you will rarely see two top players handle the same surprise situation similarly, there are common threads the top players share in approaching issues. So even if they don’t decide on a problem the same way, they’ll usually do the things I’ll be listing.

However, there is one main feeling that all of these moments have in common: anxiety, or uneasiness. In each moment, there is a fear about screwing up, failing, or overthinking — things we as Pokemon players struggle with in a unique way. A lot of us either got into the competitive card game through the video game, which is incredibly detail-oriented, or collecting, which encourages completing sets. Naturally you’ll carry these traits into the way you play cards: either you’ll be obsessed with getting everything right, “completing” every action you can, or both! Fortunately, there are ways we can improve the way we handle these tough spots, if not outright solve them. 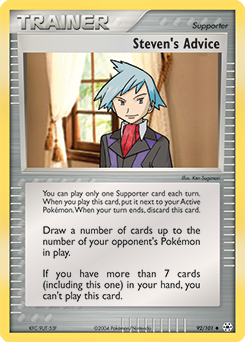 Event preparation is a huge category full of short-term and long-term decisions, so let me be clear: I’m only focusing on those decisions made immediately before. These do not include broad playtesting or planning, but they do include rushed choices like grabbing supplies before heading out of your house/apartment, or finding any last-second cards you need.

Why did I label these decisions point zero? Because unlike the other concerns, almost all of these can be solved with even marginally better planning. You don’t have to be making split-second decisions about everything, so if you’re scrambling for new sleeves or Poison and Burn markers, that’s a completely avoidable error on your part. Instead, get your act together and follow the advice undoubtedly repeated all over the place: get more than enough sleeves, get all necessary markers, and at least have an idea of where your cards will come from. If those cards are being borrowed, be ready for any conditions for borrowing, such as giving the owner collateral cards to keep until you give the cards back.

One last thing I’d note is that sometimes it doesn’t hurt to omit optional supplies. While sleeves with solid backs are so smart they’re mandatory, things like “good luck charms” and even playmats, which are allowed under the rules, should never be a top priority for a competitive player. So if you’re at a Regional Championship, don’t sweat it if you left your special playmat or plush in the room.

Immediately following event preparation are those difficult, final calls in your list. Obviously this doesn’t apply to a player who is simply net decking a list, which is presumably locked and not even up for debate. This also doesn’t apply as much to when you’re equally prepared with two decks, and have lists for both completely prepared. What we’re dealing with here are 11th hour list choices that actually involve a serious balance of pros and cons. For that reason, we’re mainly focusing on decisions ranging from one to ten cards — not choices between two different decks of 60, or zero cards.

Anyways, no matter how much advice you’ve read, or how much testing you’ve done, it is totally natural to doubt the 60 cards you’re bringing into an event — you simply need a way to resolve that doubt. I personally have made strike-outs and replacements seconds before registration closed, and can tell you that the only split-second decisions you should permit yourself to make are minor ones. It may not make sense in the moment, but if you’re already anxious, do you think your mental health will be helped by playing around with 20% of the cards in your deck right before the tournament starts? Instead, players are likely to get even more anxious and confused, even if that 12-card change was technically “correct.” A classic example I’ve seen happen is people randomly throw an entire Hypnotoxic Laser / Virbank City Gym line into decks that don’t need it: Why run six or seven cards when the result will mostly remain the same, yet is far more likely to mess you up?

Making tweaks on-site is common, and in smaller events small changes are absolutely necessary to have a fair chance against your local metagame. Why would anyone expect you to run that great anti-Fire tech in your Grass deck when nobody’s packing Fire? However, these are small choices. So keep them slow and you’re less likely to do something sloppy.

How do you manage finalizing one to three questionable slots, though? Again, we’ll refer back to good planning to pre-screen your situation: You should not have any 100% “empty slots” right before a tournament, as ideally you’ve thought about what should fill those slots. Rather, if two or more cards are “competing slots,” here’s what you should do: