“Rare Candy, Gardevoir-GX, Rare Candy, Gardevoir-GX; double Secret Spring; attach; Knock Out!” This start would be incredible, and not many decks could beat it. I for one was quite surprised that Drampa-GX / Garbodor of all things can stand a chance against this sick opening, let alone still win a game when this all happens. Why? I was pessimistic that Espeon-EX and Po Town could do the job, but let me tell you, they definitely can. 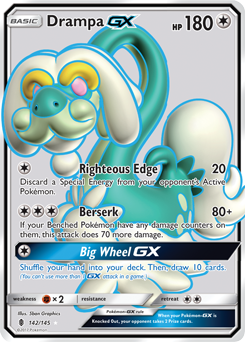 Gardevoir-GX is the deck to beat in the Standard format, and if you can’t beat it, you shouldn’t be playing the deck that you’re using. I recently played in the Richmond, Vancouver Regional Championship, and while I may have bubbled out at 39th place, I faced plenty of Gardevoir-GX builds, and took all but one down with Drampa-GX / Garbodor. Not only can the deck beat it without Shining Mew, with it, it’s going to get even easier.

Necrozma-GX is a beast in Expanded format Garbodor decks, and with Shining Mew legal for play, it will be a viable attacker in the Standard format once more. Legendary Guidance is essentially a “two for one” attack with regards to Energy, of course. The attack is equally awesome when trying to power up a Drampa-GX, since it lets you get ahead with attachments, and start streaming attackers.

Aside from some cute new additions, the strategy of the deck remains the same. Use Drampa-GX against decks that can’t take it down in one hit, aim to take big OHKOs early, and in the late game, punish your opponent for playing Items with Garbodor and Trashalanche. Against Evolution-based decks, you’ll be gunning to do chip damage, or spread with Necrozma-GX and Black Ray, to set up Devolution Knock Outs with Espeon-EX in the later game. Po Town is also a critical part of this strategy, too, since it makes the Knock Outs easier whenever your opponent evolves (which he or she has to do to stay competitive, unfortunately for him or her).

This deck is known for “50-50 or better” matchups, and its new additions should make things even stronger for it. Decks like Gardevoir-GX and Metagross-GX should be a whole lot easier with the addition of Necrozma-GX, and the other closer matchups will keep hovering around the same spot they’ve always been in. This deck can do anything, and if you’re a strong pilot of the deck, you’re going to be in contention in nearly every event you use at. Let’s get started!

Psych! I bet you almost thought I was going to just drop my list there. Let’s start off with a skeleton, shall we? With it, you can hopefully discover a deeper sense of meaning behind some of the card explanations to come… 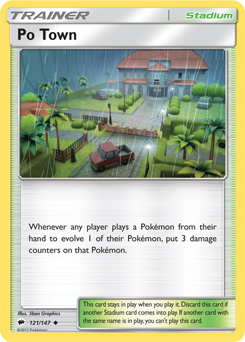 This is a really basic structure. Toting 52 cards, I think these are must-haves in any Drampa-GX / Garbodor deck. While four Trubbish is basically industry-standard, three is really all you need. I like four, since it greatly helps in the mirror match, as well as when you’re simply trying to draw them in the early game to get down into play. The same concept applies to your Garbodor line, with two Trashalanche being the bare minimum, coupled with a single Garbotoxin.

Most everything else is fairly self-explanatory. It’s a Drampa-GX deck, so you need a couple of those, Espeon-EX is something you need for matchups where your opponent plays Evolutions, and a thick Supporter count is a necessity in a format like Standard. I like having four Float Stone in any Garbodor deck, because you want to save your Float Stone to have extra mobility, to put on Garbodor, and just to draw into early. It’s ideal to save your supply of Choice Band for your attackers, so having extra Float Stone to play down after your opponent plays a Field Blower is nice when trying to keep Garbotoxin online for as long as possible.

Everything else is the bare minimum for a deck like this, and Po Town is of course for getting damage in play on your own Pokemon to power up Drampa-GX and its Berserk, as well as to punish your opponent for evolving his or her Pokemon. With this set of cards, you can reasonably craft a solid build for this archetype. Popular inclusions include the use of more Choice Band, Field Blower, Rescue Stretcher or Super Rod, and so on. Another Tapu Lele-GX is a fan-favorite, too. Try some things out for yourself to figure out what 60 card combination is best for you. This deck has a lot of room to put your own twist on things!

Feast your eyes on this:

In comparison to the skeleton, I opt to add another Trubbish, as well as another Garbodor with Trashalanche. For the last event I played this deck in (Richmond, British Columbia Regionals; 6/3/0 record), two Garbotoxin helped in drawing it earlier than not, but I struggled against the mirror match, since the few I played had more Trashalanche Garbodor. This made it awkward when trading Prizes, and I would quickly fall behind. In addition, comically, I had a mirror match where my last two Prizes were my two Garbodor, go figure!

These are your support Pokemon. While I don’t think Shining Mew is necessary by any means, it’s a great inclusion in this deck, and makes it better overall. I would certainly play it going forward. A third Tapu Lele-GX increases your odds of opening with it, and hopefully thereafter, a Brigette from Wonder Tag. It’s incredibly useful in a lot of spots, and helps mid-to-late game consistency when your opponent deactivates Garbotoxin with a Field Blower. Finding late game N with Wonder Tag can be clutch. I’m a big fan of playing three of them in the deck!